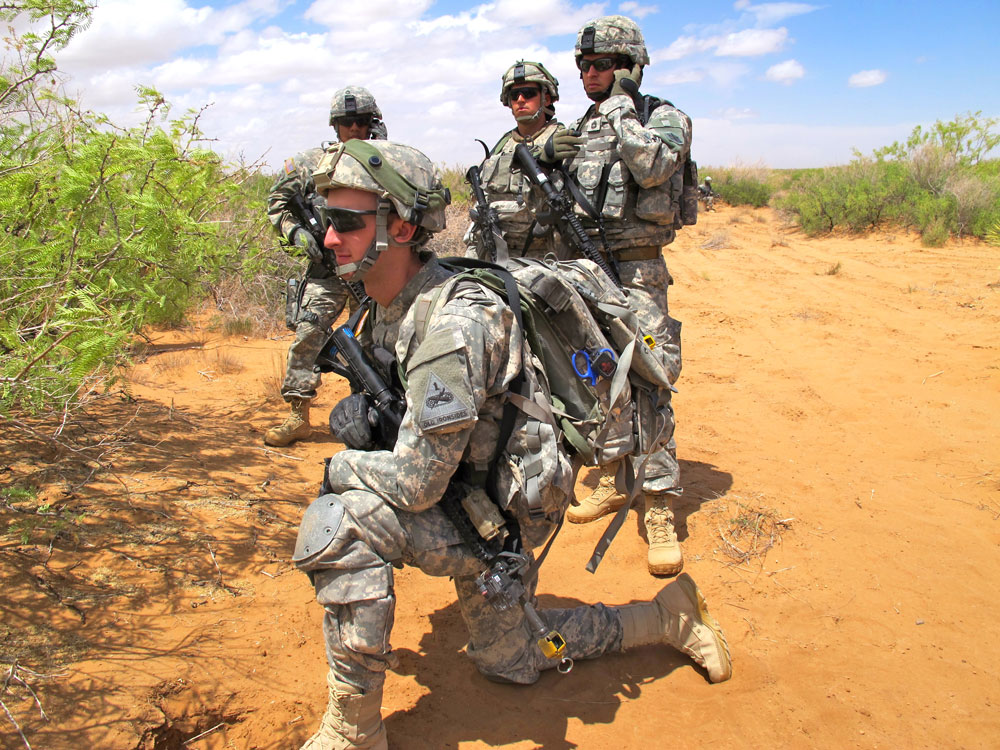 ALEJANDRA MATOS (Reporter): Riding in a military Stryker with a group of soldiers was not something that Kristian Hernandez imaged he would ever be doing as a college journalism student.

But on the morning of May 8, he and several other UTEP students experienced what it is like to be an embedded reporter with the military, as part of a training program on Ft. Bliss designed to train soldiers who will be deployed to Afghanistan later this year.

KRISTIAN HERNANDEZ: “It’s a unique experience. We get to go into Ft. Bliss, one of the biggest land bases here in the United States. We get to see what they are working on, how they are training new soldiers to go out to Afghanistan. I don’t think a lot of people get to do this.”

MATOS: The program is designed to train soldiers in air assault and combat situations, but also teaches them how to deal with an embedded reporter. The students, like Hernandez, get to see what life is like for a solider.

HERNANDEZ: “I am really excited. I am looking forward to seeing what is out there in the desert.”

MATOS: The UTEP students spent a lot of time in military Strykers and saw how the Strykers functioned.

SOLDIER: “Hey turn on your D.V. This is our blue force tracker. This tells you exactly where the rest of the trucks are when the are all up so that way you can tell who is in your battle area without actually radioing up to them.”

MATOS: The students also saw how soldiers prepare for their missions.

MATOS: But Hernandez thought he would be able to experience something completely different.

HERNANDEZ: “ I had high expectations of like gun shots or fire or something like that but I did not hear any rounds go off while I was there. There was a suicide bomber, so there were some pyrotechnics, but we were still in the Stryker. I was hoping I would get more things like that, but that’s not what this war is really about right now. It’s taken a turn where soldiers are being trained to be able to train other Afghan soldiers. I did expect that but that’s not what they are being trained to do anymore.”

MATOS: Another thing he learned was that every solider possessed one trait: patience.

HERNANDEZ: “Being a solider takes a lot of patience. One of the sergeants was referring to this term. He said, ‘have you ever heard the term hurry up and wait?’ That’s what the military is about. He said you have to hurry up and then wait for something to happen. That’s what we’ve been doing out here.”

MATOS: The exercise solidified something that Hernandez knew coming in, he would not mind being an embedded reporter.

HERNANDEZ: “You watch the movies. You want to be those guys, so definitely. If we get the chance, it would be amazing.”

MATOS: For Borderzine, this is Alejandra Matos on the base of Ft. Bliss, Texas.

An increase of reported HIV infections among Fort Bliss soldiers might not be due only to men having sex with men as stated officially. (Alejandra Matos/Borderzine.com)

“Hurry up and wait, that is what the military is about” said one of the sargeants participating in the exercise. (Alejandra Matos/Borderzine.com)

Alejandra Matos is a sophomore at UTEP majoring in Print Media with a minor in Graphic Design. She plans to continue her education upon graduation from UTEP and attain a graduate degree in Investigative Journalism. Alejandra became a summer intern for Borderzine in 2009. She graduated from Franklin High School in El Paso, Texas, where she was the editor in chief for the newspaper and yearbook and received multiple reorganizations and awards from the National Scholastic Press Association and Columbia Scholastic Press Association.