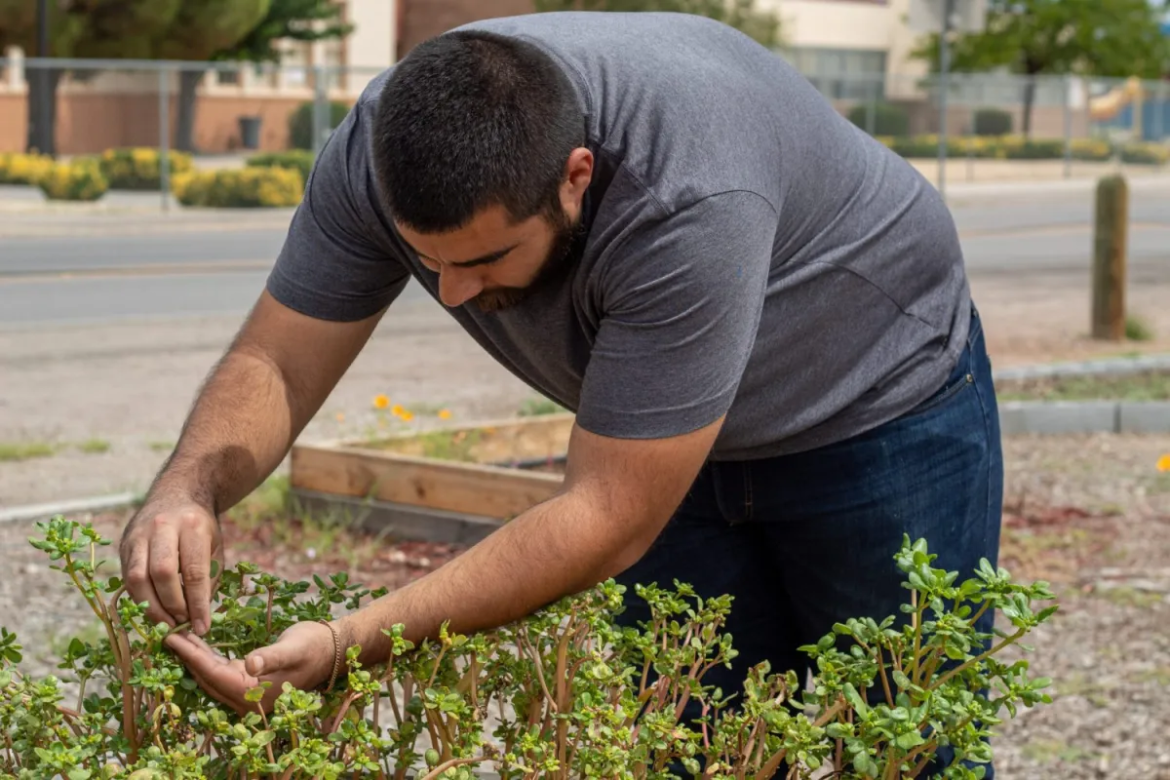 Lorenzo Luevano harvests verdolagas in San Elizario on Sept. 1. These plants are common throughout the Chihuahuan Desert and can be used as a substitute for spinach.Photo by Ariel Castillo, NextGenRadio.

This story by Borderzine.com reporter Ariel Castillo was originally published as part of NPR’s Next Generation Radio Texas Newsroom project.

SAN ELIZARIO, Texas – This small border city in the Chihuahuan Desert is known for farming high water usage crops, like cotton and pecans, but the high heat and lack of rain from climate change is changing the traditional techniques of home gardeners.

Lorenzo Luevano was born and raised in San Elizario, and got his first taste of agriculture at a young age when his grandmother introduced him to gardening. Now in his late 20s, Luevano serves as the city’s agriculture manager, teaching residents in this low-income community how to grow their own fruits and vegetables in desert conditions.

This includes one surprising plant with a lot of potential — if Luevano can make it work.

When driving through San Eli, it’s easy to mistake a highly nutritious plant for a weed growing on the side of the road. Luevano refers to these plants by the Spanish word, verdolagas, but its scientific name is portulaca, commonly known as purslane.

It is a type of succulent that can be used in several ways. Luevano uses them as a substitute for spinach.

“I use the verdolagas in butter and adding bacon, frijoles, beans, and a little bit of jalapeno,” he said. 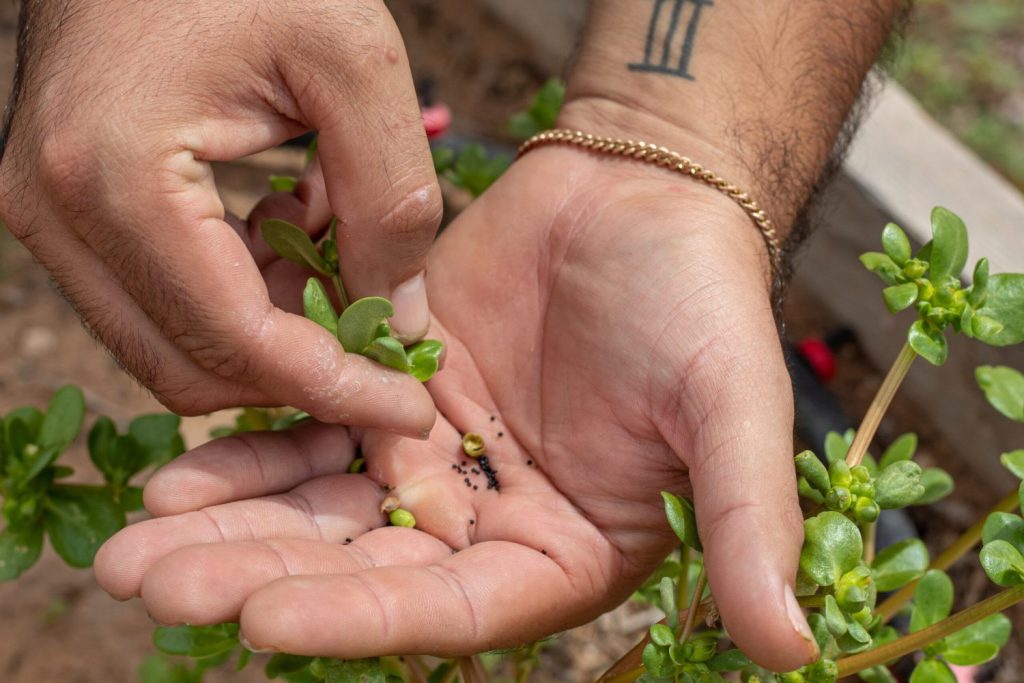 After poking through the leaves of a verdolaga succulent, Lorenzo Luevano holds the seeds of the plant in the palm of his hand in San Elizario on Sept. 1. (April Castillo/NextGenRadio)

They grow wild in San Eli and are tied closely to the history and culture of the city. For years, Luevano has been growing purslane, along with other edible plants like cilantro, but in his most recent trial, the growth was disappointing.

The days were too hot and the nights were too cold. In addition, Luevano says purslane is a tricky plant to maintain. If not cared for properly — like adding too much water — the plant will then flower, causing the leaves to become bitter.

This doesn’t make for a very tasty treat. In fact, the plant becomes inedible.

In his own garden at home, Luevano planted heat resistant watermelons, “desert watermelons,” which are typically grown in warmer climates because of their ability to withstand heat. But, just like the purslane, there was no growth because of the extreme heat.

For this desert watermelon, it was just way too hot. 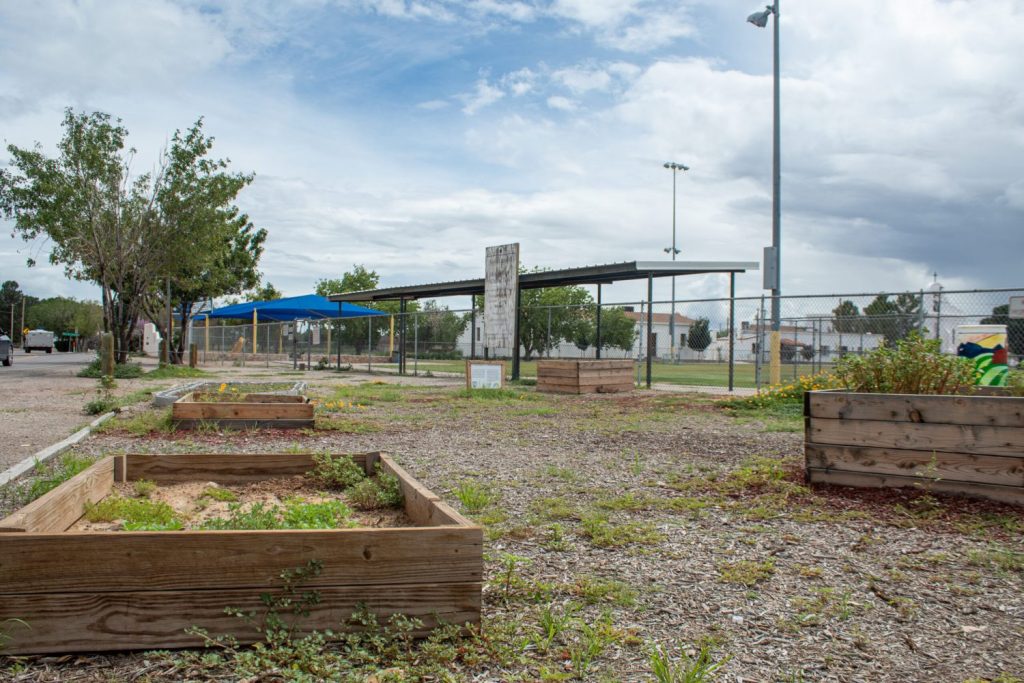 San Elizario’s community garden sits next to the city’s main road. The verdolagas are planted on wooden beds where people from the community can see them as they pass by. (April Castillo/NextGenRadio)

Understanding how to adapt will be the key to maintaining crops as temperatures rise in the region, said Kevin Floyd, the botanical curator at the Chihuahuan Desert Garden at the University of Texas at El Paso.

“So the big impacts of climate change in our region are expected to be increased temperature to some degree, but most of the plants can handle increased temperature up to some point,” Floyd said. “They’ve evolved in hot conditions. And so I think unless we get particularly hot, like if we start getting over 110 maybe, I think the heat won’t be a problem. The rainfall is the other big piece, and it seems like it’s hard to say with rainfall.”

Although sometimes frustrating, Luevano uses the failed plants as a way to learn new techniques and methods for the next season, which he can then share with his community in hopes to teach them how to have a successful harvest. 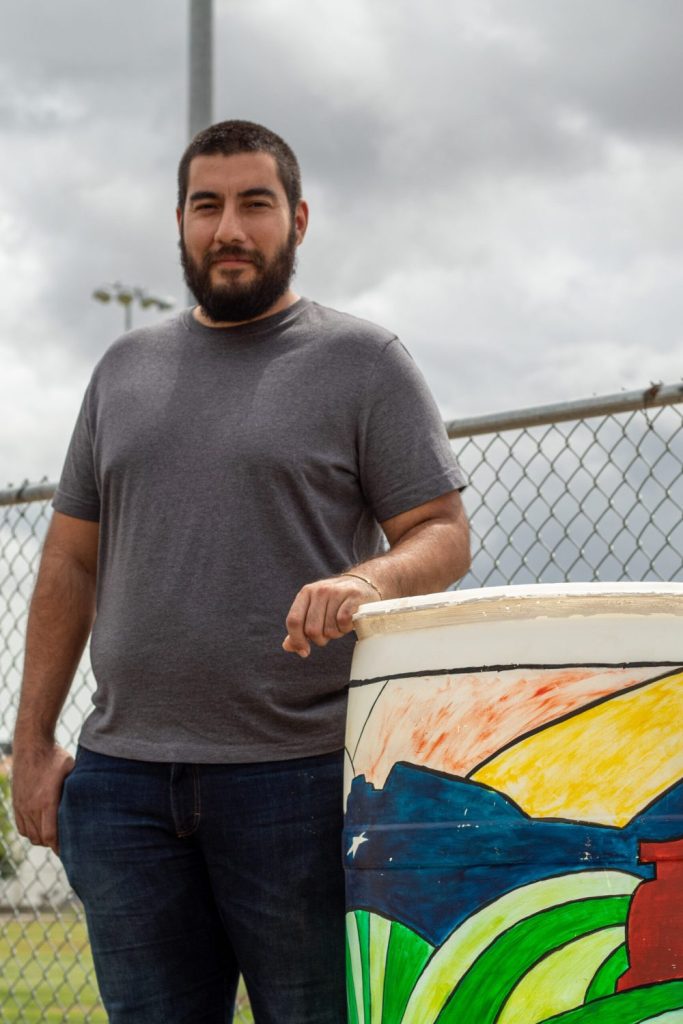 One of these new methods Luevano is currently focused on is rain harvesting — the process of collecting rainwater to help irrigate the plants. He has built what he calls rain roofs, which are designed to capture the water. He also designed and built barrels that sit out during a rainstorm and collect rain water. He hopes to get them installed at the community garden so he can teach others how to use them.

“We usually get an average of eight to 10 inches of rain, so we want to use that water and store it,” Luevano said. “That way people, during drought time, they can use that water to grow their own fruits and vegetables.”

Gardening is a process of trial and error, especially when temperatures aren’t consistent, but Luevano is persistent. He says climate change is here to stay, so all he can do is adapt and share what he has learned with his community, so they, too, can have the chance to be self-sustaining by growing their own food.

“You see on the news that a lot of cities — a lot of states — are running out of water,” Luevano said. “Down the line, five to 10 years, how is that problem going to be bigger? And if there’s a solution, what solution is there on the table for us to help that situation?”