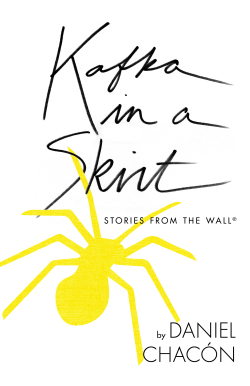 Kafka in a Skirt, Daniel Chacon’s most recent collection of short stories, opens with a bang that lights up a corner of the existential darkness, but only enough to make us wonder if indeed there is nothing, nada.

“In the Closet,” one of the numerous flash fiction pieces in the book, gives us an adolescent protagonist who has been ordered by his mother to clean that “chingadera” out of his closet. He tells the reader that even though he got down on his knees to search his closet, he “didn’t know what [he] was looking for, but [he] somehow knew [he] would spend the rest of [his] life looking for it.”

I read somewhere that it’s often said that readers read to gain insight into others but that, in fact, readers read to gain insight into themselves. I suspect there is considerable truth to that. Have not many readers, at some time in their lives, feared that they will spend, or have already spent, most of their lives looking for an elusive and indefinable something?

Still, we continue to search, as do the characters in this collection. And just as human behavior is often contradictory so is the behavior of these story characters. Often, they live behind walls of their own making, yet they reach out, create a hole in the wall through which they can make human contact.

The man in “A Nice Baguette” lives alone behind the brick and mortar wall of his apartment. He is safe in his solitary self-confinement. And yet he chooses to eat his meal in front of a window he opens wide to the busy street beyond. He wants his existence to be acknowledged while being left alone. Except when he may occasionally have the need for communion and breaks bread with a passerby on the other side.

The walls in the stories are usually not, however, brick and mortar. They are, as in life, ethnic and racial stereotypes, sexual inhibitions, geography, technology, or any number of other ways walls can be built to keep one in a cocoon, and safe from the existential unknown.

In one of the collection’s funniest stories (Chacón has a wickedly absurd sense of humor) “Furry Spider,” a young couple lives in a technologically smart house, high in the hills above El Paso. The wife works away from home; the husband, a techie, works from home. In his smart fortress, he is isolated from life’s ugliness. Except for the spiders. The spiders he ferociously fears. Oh, and then there’s Bacon the cat who insists on dropping spiders on the chest of our protagonist in the middle of the night. But is this reality or is the protagonist merely seeing pink elephants? Or cracking from the lack of human connection?

This story made me think about my own walls, and it made me laugh out loud. “Furry Spider” will stick with me.

Those familiar with the talented Daniel Chacón’s other works will already know that he’s quite comfortable in a post-modern Kafka world. Kafka in a Skirt continues in that vein. This collection of stories will not disappoint.