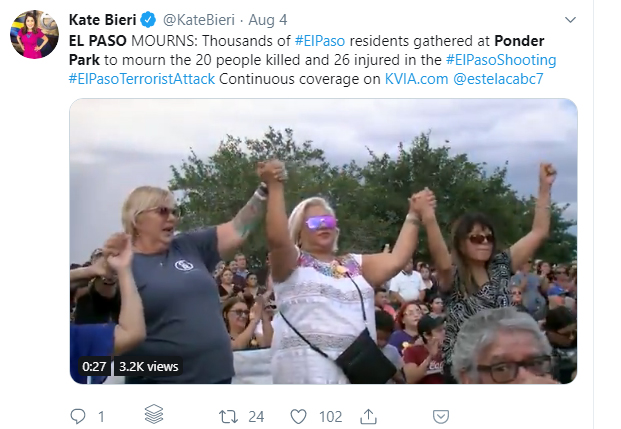 The El Paso Police Department received first call about an active shooter at the Walmart near Cielo Vista Mall at 10:39 a.m. Within six minutes, first responders from around the city arrived on scene. Later, the police would determine there were no shots fired at the mall and the attack was only at the Walmart. Soon after learning of the shooting, former congressman Beto O’Rourke announced he was suspending his campaign for the Democratic presidential nomination to return to his hometown of El Paso. The El Paso Fire Department shares a tweet confirming that the family reunification center for families looking for their loved ones is at MacArthur Middle School near Cielo Vista Mall. At 2:10 p.m. Saturday, President Donald Trump tweeted about the shooting. Texas Gov. Greg Abbott confirms 20 people are dead and over two dozen have been injured following the shooting at the Cielo Vista Walmart in El Paso, making it the eighth-deadliest mass shooting in U.S. history.

Three hours after emphasizing the need for donations, the El Paso Fire Department announces blood donation centers are at capacity. U.S. Rep. Veronica Escobar emphasizes that the suspect in custody “is someone who came from outside our community to do us harm. A community that has shown nothing but generosity and kindness to the least among us – those people arriving at America’s front door.”

El Paso Mayor Dee Margo reiterates on social media that the El Paso gunman was not a local and thanks El Paso’s first responders for their efforts throughout the day. O’Rourke tweets that anyone concerned about contacting El Paso authorities to reach out to the Hope Border Institute in the wake of the shooting.

The El Paso Fire Department announces that MacArthur Middle School is at capacity for item donations. Residents of Ciudad Juárez gather for a vigil to honor victims of the El Paso shooting. A line of donation-laden vehicles arrived at Del Sol Medical Center, where several of the shooting victims were taken. The gunman in the El Paso shooting is identified as a 21-year-old man from Allen, Texas, named Patrick Crusius. He is booked at the downtown El Paso jail for capital murder. Community members continue to line up to donate blood, time, and supplies the morning after the El Paso shooting. The next days see the Borderland community coming together to process the tragedy and begin trying to heal. Molly Hunter was a 2019 summer intern for Borderzine.com. She is a journalism major at University of Iowa. She has been published in The Daily Iowan in Iowa City and The Gazette in Cedar Rapids. Her passion lies in sustainable agriculture reporting.