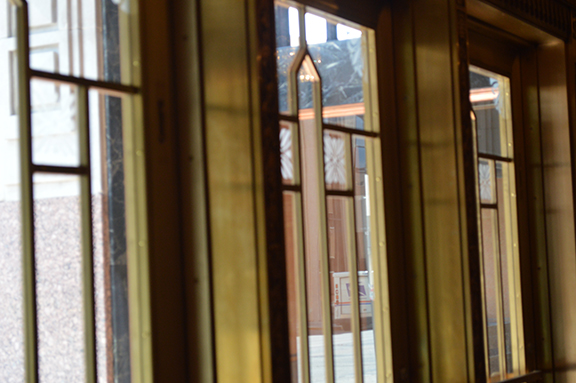 When people think of history in El Paso, Texas, they’re likely to dwell on the city’s unique relationship with Juarez, and rightly so. But it’s hard for folks to miss the real historical monuments sprinkled around this border town, even if they aren’t aware of them. They just have to look up.

Henry Charles Trost died in 1933 but his legacy still proudly stands in the form of some of the 73 buildings he and his brothers designed in the borderland, dating back to 1903. Structures by Trost and Trost have housed the fabric of the community, including groceries, hotels, schools, houses of worship, department stores and more. They also made history in their own right by innovating with what is de rigueur in construction today – steel-reinforced concrete. “El Paso was transformed into a metropolis,” said Max Grossman, associate professor of art history at the University of Texas at El Paso. “It assumed the character of a large bustling city, kind of like New York or Chicago, because if this kind of architecture.”

And the architecture of El Paso is unique, including art deco, gothic, federal, Romanesque, Butanese, influences from Moorish architecture. “Each building is part of a larger artwork that is the City of El Paso” Grossman said. “There’s no city in America, probably there is no city in the world, in which a single architectural firm made such a deep and permanent impression.”

Some of these structures became community icons, including the White House Department Store, Popular Dry Goods Department Store, the Palace Theater and Hotel Paso del Norte – and countless buildings on the UTEP campus. Some of the historic buildings are gone, including the John T. Muir Building, First National Bank, Union Bank and Trust. Recent demolitions, including Union Bank and John T. Muir buildings, both in 2013, spurred a robust movement to protect others.

The reclamation has taken a couple of forms, including an increasingly focused push by some local preservationists – not always successful – and an entrepreneurial tack involving a couple of prominent local business owners. The Anson Mills Building casts a shadow over San Jacinto Plaza in the center of downtown El Paso, where it has stood since 1911. It fell into disrepair for some years in the 21st Century until an investor group, Franklin Acquisitions, acquired it. Former Western Refining executive Paul Foster led the purchase and restoration of the Mills Building which reopened in 2011. The structure’s 100th birthday was appropriate because Mills became the first of a handful of successful and planned projects to breathe life into historic structures. Fueled by a state tax credit passed in 2013 and tax subsidies from El Paso, others invested in a mix of historic and new projects.

According to El Paso, Inc., Lane Gaddy – president of W Silver Recycling – acquired the Martin Building, at the corner of Stanton and Mills and reopened it late in 2015 as a 42-unit apartment building. Gaddy and his partners opened the Aloft Hotel El Paso Downtown, in the summer of 2018 in the O.T. Bassett Tower, dating to 1930. Foster’s group has recently acquired half a dozen historic buildings, and has plans to renovate the Plaza Hotel, built by Conrad Hilton in 1930, but standing vacant on San Jacinto Plaza, kitty-corner to Foster’s Mills Building.

El Paso has its share of people who cherish the city’s architectural history – in some cases, even more than their predecessors. “When I took over, it was a very, very modern front desk,” said Joe Nebhan, who took over the Gardner Hotel from his father in 1981. The Gardner, mind you, opened in 1922. Nebhar removed carpet, uncovered windows and exposed Tiger Oak walls. His daughter, Stephanie, exposed the original hardwood floors. The Gardner’s lobby is a time machine, home to the oldest phone booth in El Paso, a 1930s-era phone switchboard, and a curio cabinet graced with aging typewriters, documents – even a revolver, alongside a photo of John Dillinger, who stayed there in 1934. The Gardner has never closed it’s doors, making it the longest constantly-running hotel in El Paso.

Nebhan served for five years the El Paso County Historical Commission, alongside his good friend Bernie Sargent and professor Max Grossman. According to the El Paso Times, Sargent and Grossman were not reappointed to the board by county commissioners because of allegations that they violated the Texas Open Meetings Act. Grossman and Nebhan say the decision had more to do with removing the most ardent preservationists. “We were so successful in fighting to preserve Duranguito (a historic, predominantly minority community), that’s where everything came in.”

Some advocates for preservation say they’ve paid a price at the hands of city leaders who don’t share their passion for restoration. City leaders have awarded tax subsidies for projects which refurbished historical buildings – about $150 million in incentives in recent years, according to an article in El Paso, Inc. Not everyone is a fan of that strategy.

“This is our tax dollars, our tax dollars, going to feed the richest citizens of this community,” said Nebhar, who points out that dozens – not thousands – of permanent jobs come from projects like hotel and apartment projects. Also, some folks who have lived downtown say there’s incremental progress, but that we aren’t there yet. “To me, I see downtown as, like, it’s called the center for a reason and I think everything should be centralized,” said Rodrigo Ostos, an accountant at El Paso Electric. “All my needs as a resident downtown should be met, otherwise I’m not going to live here. The point is to not use my car.”

Courtney O’Loughlin, a New York native who stayed in El Paso after his Army service, is excited about the new development and optimistic about the future. “Right now it looks like a hot mess but if we’re patient enough, we could be a Dallas or Houston or Austin,” he said.

“This is a canvas, right here,” said O’Loughlin. “We just need to let artist do [their] work… hopefully, we’ll be able to have a Picasso.”