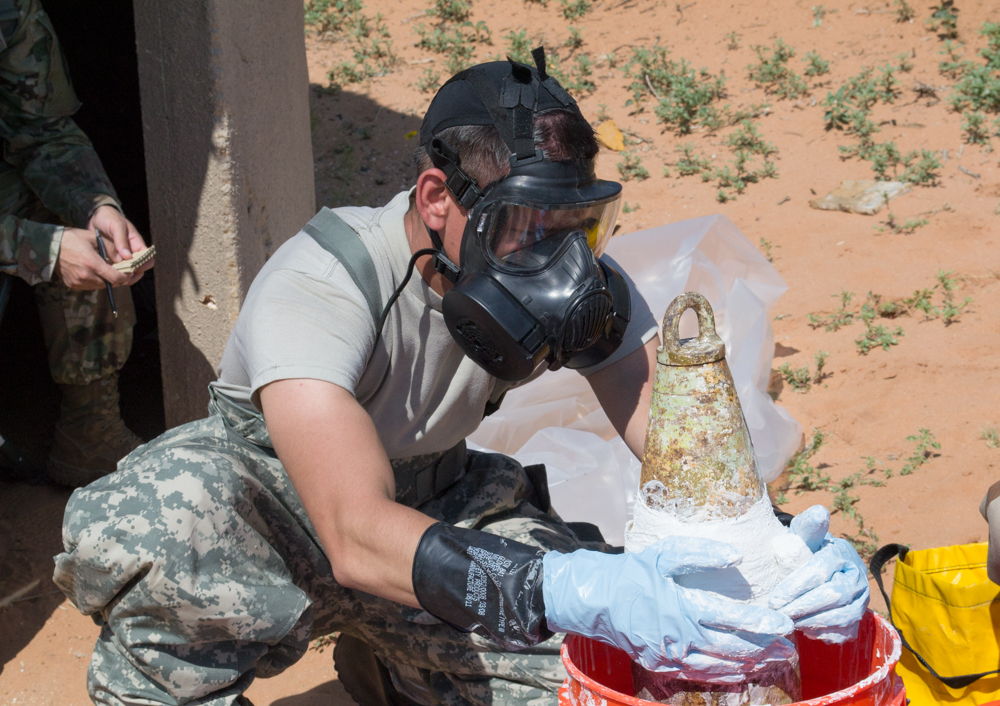 FORT BLISS, TEXAS – An elite team of soldiers in the 22nd Chemical Battalion, specialize in defending the country against chemical, biological, radiological and nuclear weapons threatening our safety, normally called a CBRN threat.

Members of this Battalion risk their lives daily, something they do with great honor in an effort to defend the country they love, they said.

Team members now normally train in a special training field called “Biggs Field,” which is a training facility located along the Texas and New Mexico border.

These soldiers training tends to focus on how to disable threats coming from chemical, biological, radiological and nuclear weapons, threats they could possibly face during deployment. A normal CBRN defense consists of protection of both the team and the civilians, and avoidance of lethal contamination and how to collect evidence.

“The training includes not only learning how to disable bombs, but how to communicate with civilians, take them to safety and other key elements like learning to categorize threats and the enemy,” said Chief Warrant Officer John Losey.

Soldiers from this battalion serve and protect in a slightly different manner, given that their equipment and uniform is different, although their goal is the same. Among the equipment, gas masks are to be worn at all times, gloves, special rubber boots and a yellow suit. A helmet might be also used occasionally, depending on the situation.

“We always want to be prepared in case it happens,” Losey said.

Training conditions tend to be as realistic as possible so the soldiers know what it is like to be on a combat environment. For this reason, fields are normally built based on real-life villages from the Middle East to help soldiers properly adjust once deployed.

These villages feature specific sites used for controlled explosions, villagers played by hired actors, deteriorated buildings and cars that can be used by the soldiers as a shield.

While their training focuses on how to deal with these weapons, soldiers also need to learn how to recollect evidence and how to bag it, keeping in mind that all of this has to be done in under thirty seconds for safety reasons.

Time frames are extremely important not only for the U.S. Army, but for the battalion as well, since everything they work with might explode in the blink of an eye. This is why it is very important for the chemical response team to act fast and maintain safeness for them and for the civilians around them.

“We, in the chemical core, try to ensure that our soldiers are flexible, that they can adapt to any kind of environment. So whether it’s doing their basic soldiering skills, reacting to contact, being in some sort of combat situation or enduring a long deployment, you have to be mentally prepared and find that motivation within yourselves,” Losey said.

Deployment isn’t something easy to cope with, especially for soldiers who have recently enlisted. Regardless, it is essential they do their job effectively to avoid any type of danger once in combat.

One advantage for soldiers is that they grow very close to each other, considering themselves as family. They take care of each other and help each other overcome any obstacle they face, both in training and during deployment. All for the one reason of being the best at what they do.

It is known that soldiers move from time to time, training in different military bases around the country. Some even fly overseas, allowing them to adapt to different scenarios they come across with. Whether it is a desert, the mountains, big amounts of snow, a forest, or a jungle, soldiers gain enough experience to overcome any real-life situation.

“I like to train my soldiers based on all the training I have, my personal experience and everything I have seen in combat just to get them ready for the actual big event,” said Major Shea Asis.

Asis began his military career in Hawaii. He has served as a peace keeper in Africa, the Middle East, and in Europe. After a very long career in the military, Asis was promoted to major.

He participated in trainings and deployments in Europe when he first joined the Army, working as a field artillery man. After only six months in, he was sent as a peace keeper to the Confederation of South African Workers’ Union located in central Macedonia.

“When I was a field artillery man my job was to put steel on the target,” Asis said.

After two deployments to the Middle East, one for 13 months and the second one for 15 months, Asis served in Macedonia and then moved to Africa. This is why he can easily describe how similar the training received in the Army is to being in combat.

“There are enough similarities that no matter what kind of training you do, whether its at press camp or in the field artillery, the are some commonalities across the border,” Asis said.

Asis recollection on how different his job used to be when serving on the field artillery department, has molded him into the person he is today. He recalls being called “a lethal multiplier on the battlefield”, something he described as interesting.

Regardless of the past Asis has serving the country as part of the U.S. Army, he now said his job has taken a drastic change. Leaving the field artillery in the past. Asis is now in charge of the press camp from Fort Bliss.

His job description shifted from training soldiers on how to fight in combat, to training the press camp on how to deal with handling the media aspect of the army lifestyle.

His last task, along with the entire press camp, was flying to North Carolina to assist on the Bergdahl’s case. Where himself and his unit were in charge of all the media outlets attending the controversial trial.