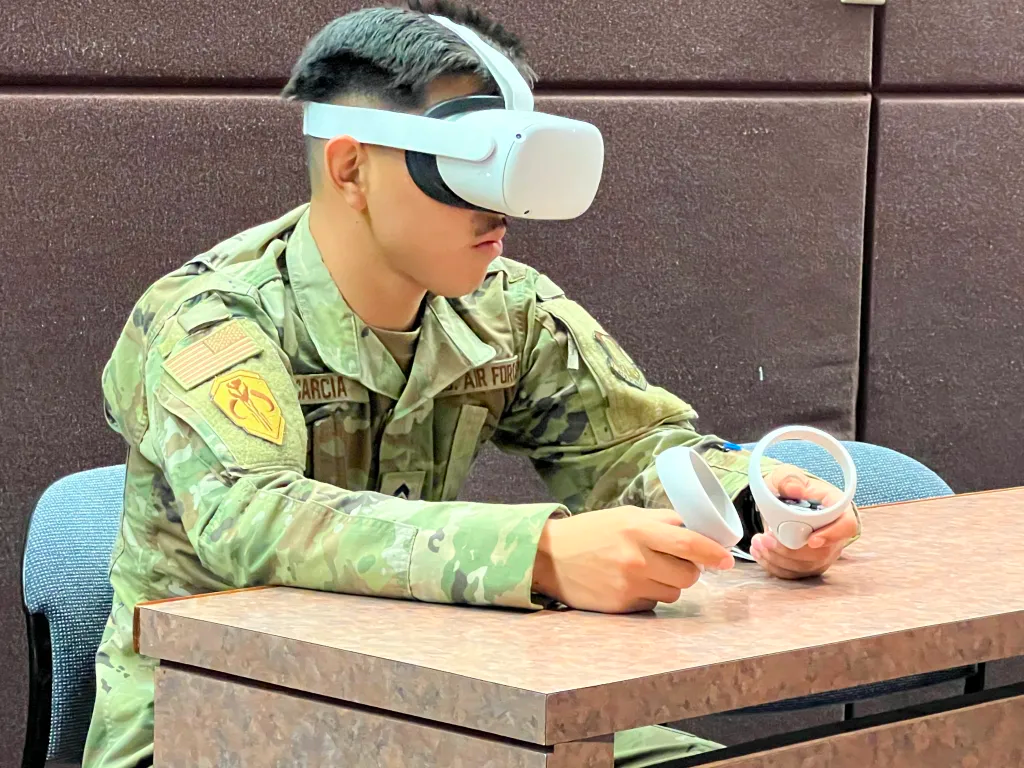 An Air Force ROTC cadet at the University of Texas at El Paso wears goggles while engaging in a voice-activated conversation with someone in crisis during a virtual reality training module. (Angela Kocherga/KTEP News)

On a sunny spring morning, Air Force cadets gathered in a dimly lit auditorium at the University of Texas at El Paso to hear a 20-year Army officer with 11 combat tours talk about suicides in the military.

Retired Lt. Col. J.C. Glick began his discussion, via Zoom, with a brief description of his military experience, mostly in special operations.

What he said next stunned many of the cadets.

“About 18 months after my 11th combat tour — was my first of four suicide attempts,” he said.

Unlike most, Glick is comfortable talking about suicide — a leading killer of service members. He is now on a mission to get others to talk about suicide, too. He is partnering with Moth + Flame, a virtual reality company and leader in immersive learning in an effort to reduce suicides in the military.

“It’s about ‘are you thinking about hurting yourself?’ which everybody says, ‘that’s so hard to say.’ It’s not. You just have to practice saying it. And we’ve got the thing that will help you practice saying it,” Glick said.

The U.S. Department of Defense required annual report tracking suicides in 2018 to “increase transparency and accountability for DOD efforts toward the prevention of suicide,” according to an executive summary in the most recent report.

The 2021 report is being finalized but the quarterly reports combined offer a look at last year. In 2021, there were 328 suicides among active-duty personnel in the Army, Marine Corps, Navy and Air Force. The reserves lost 190 members to suicide, and 116 National Guard troops took their own lives this past year.

The Moth + Flame virtual reality modules train fellow service members, team leaders and commanders to have conversations with someone considering taking their own life with the goal of ensuring that the person gets the help they need. There’s also a module for spouses. The conversation is voice-activated by the user who has to say things out loud and engage with a person in distress.

The virtual reality training could be a tool in the overall effort to prevent suicides. The Air Force is currently testing the modules. Cadets had the opportunity to try the training in El Paso after a question-and-answer session at the end of Glick’s talk.

“You put the goggles on. There’s a little introduction and you’re put right into the scenario of confronting an airman or a guardian, you know, someone in the Space Force, who is having suicidal thoughts,” Bochte said.

As a squadron commander, she has seen the virtual scenario play out in real life.

“Quite a few times, both as a friend to peers who were really struggling” and with her teammates who “were crewed together for an entire month in Afghanistan,” she said.

Bochte has also seen others come forward seeking help, “either self-identified who came to me and said that they were having trouble, or were brought in by coworkers and friends.”

Suicide affects every branch of the military. But the largest, the Army, had the highest number of suicides last year with 176 active-duty, 45 reserve and 101 National Guard troops according to the most recent quarterly report for 2021. There are 480,000 active-duty personnel in the Army.

Fort Bliss does not release the number of suicides among its soldiers “as a matter of policy,” according to a statement in response to a request for data.

“Regarding our Fort Bliss service members who succumb to suicide, each incident is a tragic loss that affects the service member’s family and teammates as well as the larger Fort Bliss family,” according to the statement.

At Fort Bliss, suicide prevention is a command-level priority.

There are a range of resources for Fort Bliss’ 18,193 military personnel, including military family life counselors, chaplains placed in each battalion at the squadron level and higher, outpatient behavioral health clinicians and programs; and more recently an “evidence-based” group therapy program.

“That is the goal of behavioral health services in the military — to make you better, stronger, so we have a stronger military and we’re stronger as a country and a nation for it,” Lyons said.

Lyons said his own struggles as a young person inspired him to enter the behavioral health field. He describes his role as a “travel guide” rather than a “tourist” for soldiers who seek mental health help.

Some soldiers, he said, can be at particular risk because of a combination of factors. Soldiers who had difficult childhoods, are currently experiencing problems with intimate partners and are young and often more impulsive need special attention if they are in crisis, Lyons said.

However, the newer generation of young soldiers is also often more willing to talk about mental health, he said.

“I think they’re leading the way as far as the societal change of being open and able to talk about mental, psychological and emotional issues in order to resolve our issues and be stronger as human beings as a result,” he said.

Dispelling myths about who is at risk of suicide, to include those with successful military careers, is also critical.

“Those people who are ‘hard chargers’ as we call them in the military, who are really on their game, getting things done, sometimes, often have high expectations of themselves. That can actually be a risk factor,” Lyons said.

The Fort Bliss Suicide Prevention Program provides training and education to create awareness at all levels. The mandatory training focuses on the ACE suicide intervention model which stands for “Ask, Care, Escort.”

During a half-hour session at William Beaumont Army Medical Center in March, the trainer emphasized ACE and led a discussion with soldiers about the barriers to seeking mental health help including the perceived stigma.

“The more that we’re talking about it, educating ourselves and learning about it, the more I feel we’ll get away from the stigma,” he said. “And it shows we’re people and hurt like anyone else, and when we need help it’s ok to ask for help.”

These days more military leaders are openly discussing their own mental health struggles. Glick is blunt about being treated for anxiety, post-traumatic stress disorder and depression after multiple deployments.

“My first wife caught me with a gun in my mouth and she never talked to me about it after that,” he said. “And this is a very good human being, a spectacular woman, definitely a good military wife and a good mom.”

Years after they were divorced, he asked her why she didn’t ask about it. He said his ex-wife told him she didn’t want to upset him more.

“When you have somebody who’s a really good person feel like they can’t talk about it because they’re not equipped, that speaks to me. That means she’s not alone,” he said.

Teaching people to have those life-saving conversations has become his new mission.

Glick is in recovery. He found the help he needed and has remarried. He wants those in crisis to know things will get better.

“My life is wonderful every single moment,” he said. “And I think that there’s hope.”