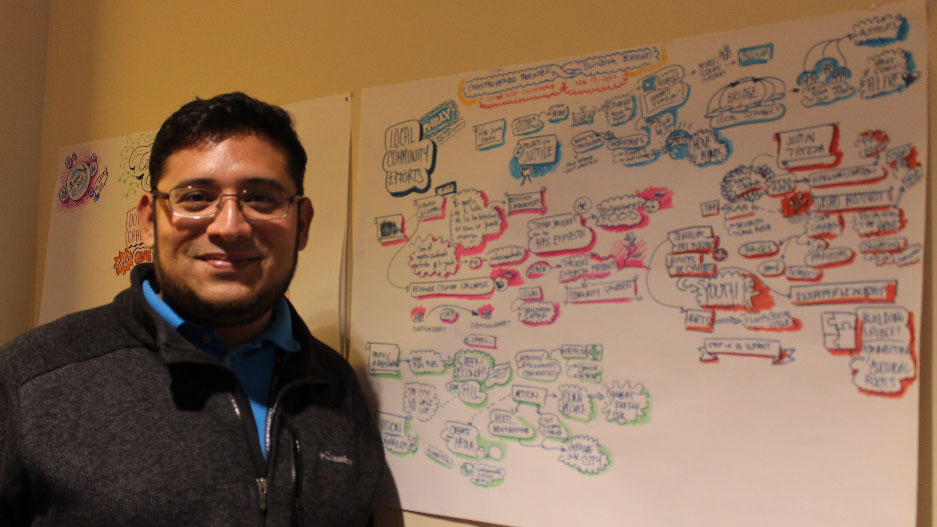 Omar Sosa-Tzec, PhD candidate in Informatics at Indiana University Bloomington, sketched out ideas from the NCA discussion on environmental justice and shared them with attendees.

PHILADELPHIA — Environmental justice in poor and minority communities, such as the U.S.-Mexico Border region and the city of Philadelphia, took center stage at sessions during the 2016 annual convention of The National Communication Association (NCA) early November.

Kathleen de Onis, a doctoral student at Indiana University, said she was motivated to organize the environmental sessions at NCA, because, “it is really important for us to have an engaged community where members can bring in their experience and their knowledge to share their struggles and their successes.”

Students from several universities, including speech and multimedia journalism majors from the University of Texas El Paso, provided presentations at the Building Bridges/Construyendo Puentes sessions on how some underrepresented communities face a variety of environmental justice challenges, from air contamination to soil toxicity and damage from floods.

In addition to the UTEP undergraduate students, several doctoral students from the The University of Colorado at Boulder (UCB) and Indiana University (IU) also participated.

A lighter moment during a session break was a musical presentation by Brian Ratcliffe and Rachel Camp, members of the organization Philly Thrive, as attendees tasted pan dulce, pastries, and snacks from a local Latino-owned bakery.

The motto for the session was: “Se ve, se siente, la gente está presente; se ve, se escucha, la gente está en lucha,” meaning, “We see it, We feel it, We hear it. People let us stand together and fight for our rights.”

During this presentation, members of the audience and the presenters sat in a circle like at a family gathering and engaged in conversation about environmental justice for minority communities. In the back of the room, Omar Sosa-Tzec (IU) sketched the ideas that came from the discussion and shared them with the attendees.

One local organization represented at the workshop was the Scribe Video Center, which was founded in 1982 in Philadelphia and works with community members to create and produce videos and other types of multimedia to raise awareness on environmental justice and other topics. Hye-Jung Park, associate director of Scribe Video Center, explained how its work contributes to providing opportunities to people of color and others in need. Park said that the Scribe Video Center was created as a response to how corporate media and government do not serve the needs of the disenfranchised. “A lot of community people just don’t have access to create their own media; they don’t have access to means of production,” Park said.

According to Park, Scribe Video Center provides minorities with the opportunity of expressing themselves through video, and also holds filmmaking workshops for residents who who don’t have the opportunity to attend film school.

“Since 2002 we have been working with different community groups, some are authors of their stories and do street movies. People can see issues related to their life and their community, and during the summer we have community screenings,” Park said.

The Farm Workers’ Support Committee, know as CATA, was also part of the second panel. It was founded by migrant farmworkers in 1979 in New Jersey. José Manuel Guzmán, a member of the organization, said its main purpose is to help workers learn and understand their rights.

“We have different locations, New Jersey, Pennsylvania, (and in Salisbury, Maryland) our membership is based in places like Mexico, Guatemala, Honduras, Puerto Rico and Dominican Republic. The majority of our members are people that are not documented. CATA’s mission is to empower workers so if they encounter a situation in the work force we help them with the best information to help them make the best decision…,” said Guzmán.

Justine Trezza, executive director of the Norris Square Neighborhood Project, said his organization is, “a place where we work collectively to promote safe spaces, inspire creativity, and position our youth to be leaders in their our lives and their communities,” said Trezza in a handout.

Philly Thrive, another local volunteer organization, said the group fights for the rights of Philadelphia residents to breathe fresh and clean air. Patrick Ammerman, who represents Philly Thrive, said: “There are huge environmental justice issues in the City of Philadelphia; we (have) especially focused in the last year and half on the South Philadelphia oil refinery,” said Ammerman.

About a year ago, de Onis began began planning and making phone calls to organize the conference sessions. “It was amazing to have everyone come together. It was a real conversation; it wasn’t fake and people were genuinely moved,” de Onis said.

“I encourage people, at this time when it is really easy to feel disillusioned, that you can do anything,” de Onis said. She also encouraged individuals to, “find those networks and communities that give us strength and to ask: ‘where do we go from here?'”

To learn more about the community organizations that presented at the conference you can visit the following websites, Scribe, C.A.T.A, Philly Thrive, Norris Square Neighborhood Project.