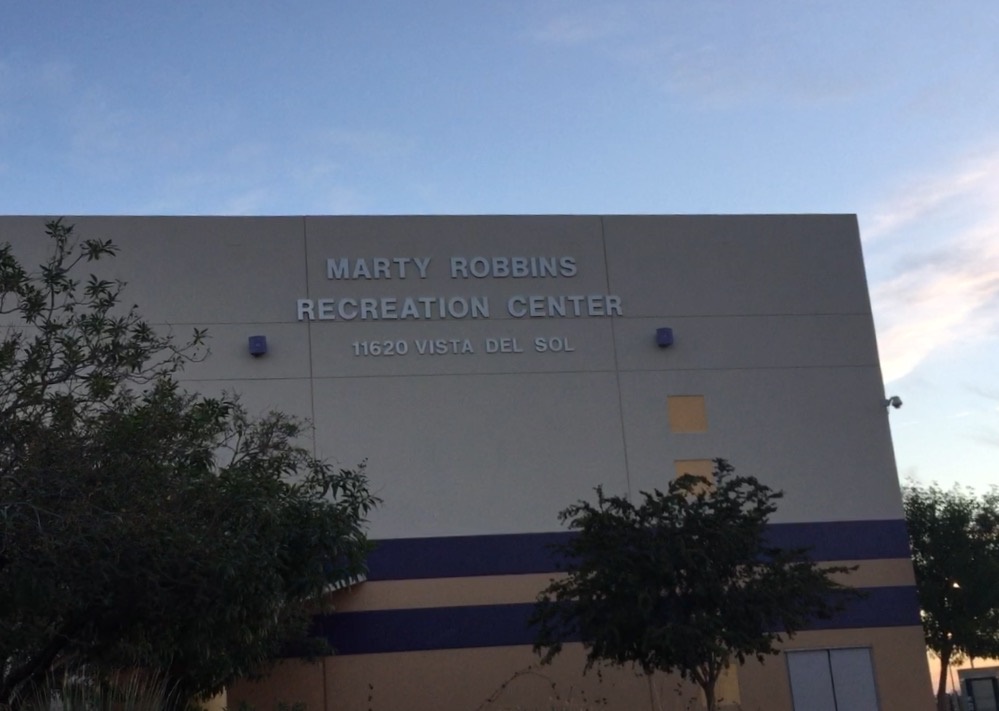 The recreation center at Marty Robbins Park in East El Paso. The park will be receiving a splash pad as part of the city's efforts to spread park amenities across the city.

While research shows that access to local parks is important in childhood development, some parts of El Paso may not be offering the support kids need to thrive in lower income areas of the city.

The recreation center at Marty Robbins Park in East El Paso. The park will be receiving a splash pad as part of the city’s efforts to spread park amenities across the city.[/caption]

“When a low-income family doesn’t have a park, or doesn’t have a school, then they are truly at a disadvantage,” said El Paso District 7 City Rep. Lily Limon.

She said the city needs to support more parks in lower income areas where the neighboring community lacks the funds to maintain it themselves. She points to an example in her East Side district, which ranges roughly from McRae Blvd to Zaragosa Rd. She said E.L. Williams Park, south of I-10, has deteriorated over time.

“I categorized it as a third-world community park with absolutely nothing other than a baseball field on it,” Limon said.

A 2011 report by the nonprofit National Recreation and Parks Association (NRPA) concluded that the proximity and condition of parks had an impact on people’s desire to engage in physical activity, thus improving park facilities can help address chronic public health issues, such as obesity, in underserved communities.

The NRPA considers park access for low-income residents to be a civil rights and environmental justice issue and calls for a policy of equity, rather than equality when it comes to park resources.

“Equity is something different than equality; it means not all citizens will have equal access to parks, but rather those demographic groups who have a greater need should have greater access,” writes Robert Garcia in the NRPA’s August newsletter.

“I want justice, I want equity for our parks,” Limon said in a phone interview. She has been outspoken about parks in her district, which she said were short on amenities like lighted baseball fields and basketball courts, shade structures, picnic tables, benches and playground equipment that are more common in parks located in more affluent areas of El Paso.

“When I came into office, one of the things that I found was that a park south of I-10 had the greatest amenities and seemed to always be getting something done for that park,” she said.

“They were just at the top of the list, getting everything that was available,” she said.

Yucca Park is comprised of 19.82 acres. It has multiple amenities, including a library, a lighted basketball court, a lighted baseball field, a play structure, swings, 10 picnic tables, and two practice fields.

Carreon agrees with Limon that “the more associations, the better” for El Paso.

Lomaland Park and Yucca Park are located within the same ZIP code, 79907, where the median annual household income is $28,946 and 31.1 percent of individuals live below the poverty level, according to the U.S. Census Bureau.

Limon says she is proud of how amenities have been distributed around town, giving examples like a new aquatic center going to Lionel Forti Park, south of I-10, but mentioning a new spray park going to Marty Robbins Park, north of I-10. The average annual household income for the ZIP code the former park is located in is $44,946, compared to $52,088 for the latter.

She said she and other city representatives have access to a list from the Parks and Recreation Department of which parks are most lacking in amenities. The list grades different amenities at parks, like courts, benches, walls, fencing, turf and restrooms, from an A to an F and supplies an estimate for the cost of the repairs. The “D” grade list includes parks located in every district of El Paso, with the most frequent being District 8 in central El Paso, with 18 amenities at 11 parks receiving a “D” grade.

“So when you get a list that goes across the city, you don’t have a problem voting on something even if your district isn’t going to get it, because you know that the next round, one of your parks is going to be up there in that rating. So we’ve been able to better allocate funds,” Limon said.

The Lomaland Neighborhood Association holds small fundraisers such as weekend car washes and candy sales to cover administrative costs for the organization, Carreon said. “The members seem to like what we do. It’s not a lot of money, it’s just a couple hundred dollars, we use that to pay for printing and paper costs.”

Carreon says the newer associations in poorer communities have a better chance to receive neighborhood project funds because more affluent areas already have parks with amenities.

The city recognizes over 80 neighborhood associations that are spread across El Paso. This map shows the location of all registered associations.

Limon explained one criteria the city uses to determine where to allocate park funds is whether children who live in low income neighborhoods are within walking distance of a local park.

“Because if they are not that close, parents are working and children can’t be driven somewhere, then they are truly at a disadvantage.”

Limon said access to parks for low-income families is “critical.” Middle-class families often have more disposable income to provide more recreation options for their children, she said, but for families in “lower socio-economic areas, you look at the park as the primary outlet.”

According to researchers, the disparity between income and access is part of a lingering legacy of racial and ethnic residential segregation fueled by structural inequalities in wealth and income.

Groups like Earthjustice, the nation’s original and largest nonprofit environmental law organization, have asked the Environmental Protection Agency to improve access to parks and recreation as an environmental justice and civil rights issue.

While access to city parks is free to the public, some state and national parks in the Borderland, like the Wyler Scenic Aerial Tramway in the Franklin Mountains State Park, charge access use fees. A visit to the Wyler Tramway for a family of four costs about $50, something many low-income families can’t afford.

Other parks, like the Chamizal National Memorial, part of the National Park System, provide free access to the public. Visitors can make use of the grounds during daylight hours, and learn more about the memorial at the visitor center.

There are some programs available to help low-income families access parks for free or at reduced fees.

The Every Kid in a Park program, started for the National Park Service Centennial, is in its second year. It offers fourth graders and their families free access to national park sites like White Sands National Monument, Carlsbad National Park and Guadalupe National Park for the 2016-2017 school year.

“The Every Kid in the Park initiative connects kids to their local parks, and has been so successful in making sure kids take advantage of all that our outdoors have to offer,” said Jo-Ellen Darcy, Assistant Secretary of the Army Civil Works.