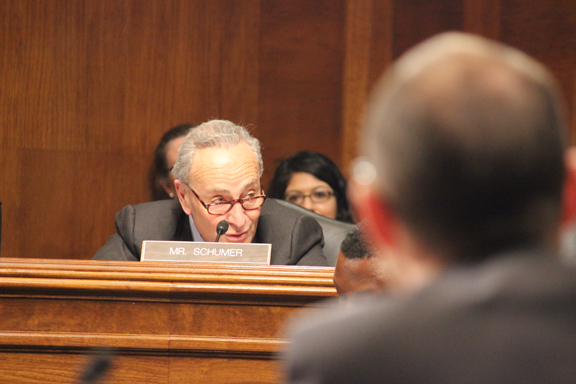 Sen. Chuck Schumer, D-N.Y., questions witnesses Thursday about the economic impact of the H-1B program that has brought foreign workers to the U.S. to replace American workers. SHFWire photo by Luke Torrance

WASHINGTON – In November 2014, the Walt Disney Company reported record $48.8 billion in sales. It was the fourth straight year of record profits.

The theme parks – Walt Disney Land, Walt Disney World — generated $2.7 billion in profits, a 20 percent increase. It was a small piece of Disney’s enormous pie, but these profits alone will be more than “Star Wars: The Force Awakens” will gross worldwide.

With such an optimistic financial outlook, Leo Perrero was expecting good things when he was called to a meeting with Disney executives in late 2014. Perrero had worked in IT at Disney for over a decade, handling the billions of dollars spent by park visitors. His supervisors, Perrero said Thursday before the Senate Judiciary Committee, had earlier given him glowing reviews: “This year Leo was instrumental,” “Leo saved the company over $10,000.”

He and more than 100 of his coworkers would be replaced in 90 days by foreign workers, and they were told that they would have to train their replacements or face losing severance pay.

Perrero was one of six witnesses who testified before the Senate Judiciary Committee about the H-1B visa program and how it affects high-skilled workers. It is the second hearing on the visa program held in the past year by the committee.

The Disney employees were replaced by foreign workers brought in through the H-1B program, which allows foreign workers to stay in the United State for three years. Most of these visas are snatched up by outsourcing firms, most based in India. These firms contract with companies like Disney or IBM to provide tech services.

As Perrero spoke to the senators, he often paused and swallowed hard.

“My coworkers and I felt extremely betrayed by Disney,” he said, his voice shaking. “They were simply going to cast us aside for their financial benefit.”

Perrero almost broke into tears when he recalled having to tell his children he could not buy them pumpkins because he was losing his job. He spent the last few months of 2014 training his replacement, a process he called “disgraceful and demoralizing.”

“I have been contacted by numerous American workers at many companies who are currently training their replacements,” Professor Ron Hira of Howard University said. The public policy expert said  companies abusing the H-1B, such as Disney, New York Life and Toys R Us, were “only the proverbial tip of the iceberg.”

“The use of foreign workers has directly contributed to the health of my company, and to our ability to offer additional jobs to Americans,” O’Neill said.

But Sen. Jeff Sessions, R-Ala., said the foreign workers using the H-1B visas are not truly emigrating to the United States. They can only stay for three years if the visa is not renewed, a decision made by the foreigner’s employer.

Hira and Salzman argued that the program was bad for foreigners and Americans. Hira said the replacement workers’ wages were “$40,000 lower” annually when they took IT jobs at energy company Southern California Edison.

Additionally, companies do not have to pay for health insurance or retirement benefits. If these foreign workers are fired or quit their jobs, they must leave the country, which makes it very difficult for them to negotiate salary or find other jobs.

The few senators that attended the hearing agreed that the current system was not working. Sen. Chuck Schumer, D-N.Y., said that the Border Security, Economic Opportunity, and Immigration Modernization Act of 2013, which he helped write, would fix issues with H-1B.

“If our bill had passed, you wouldn’t be in the pickle you’re in,” Schumer said to Perrero. The bill was written by Schumer and a bipartisan group of senators known as the “Gang of Eight.” The Senate passed the bill, but the House killed it.

Sessions asked Hira and Hal Salzman of Rutgers University if Schumer’s bill would have saved Perrero’s job. They both said no.

“It would have been much worse for the American workers than the status quo,” Hira said.

Perrero described technology as his dream career. After speaking out publicly against Disney, he claimed that he was blacklisted by other tech companies. He now works for his father-in-law’s real estate business.

Reach reporter Luke Torrance at luke.torrance@scripps.com or 202-408-1494. SHFWire stories are free to any news organization that gives the reporter a byline and credits the SHFWire.