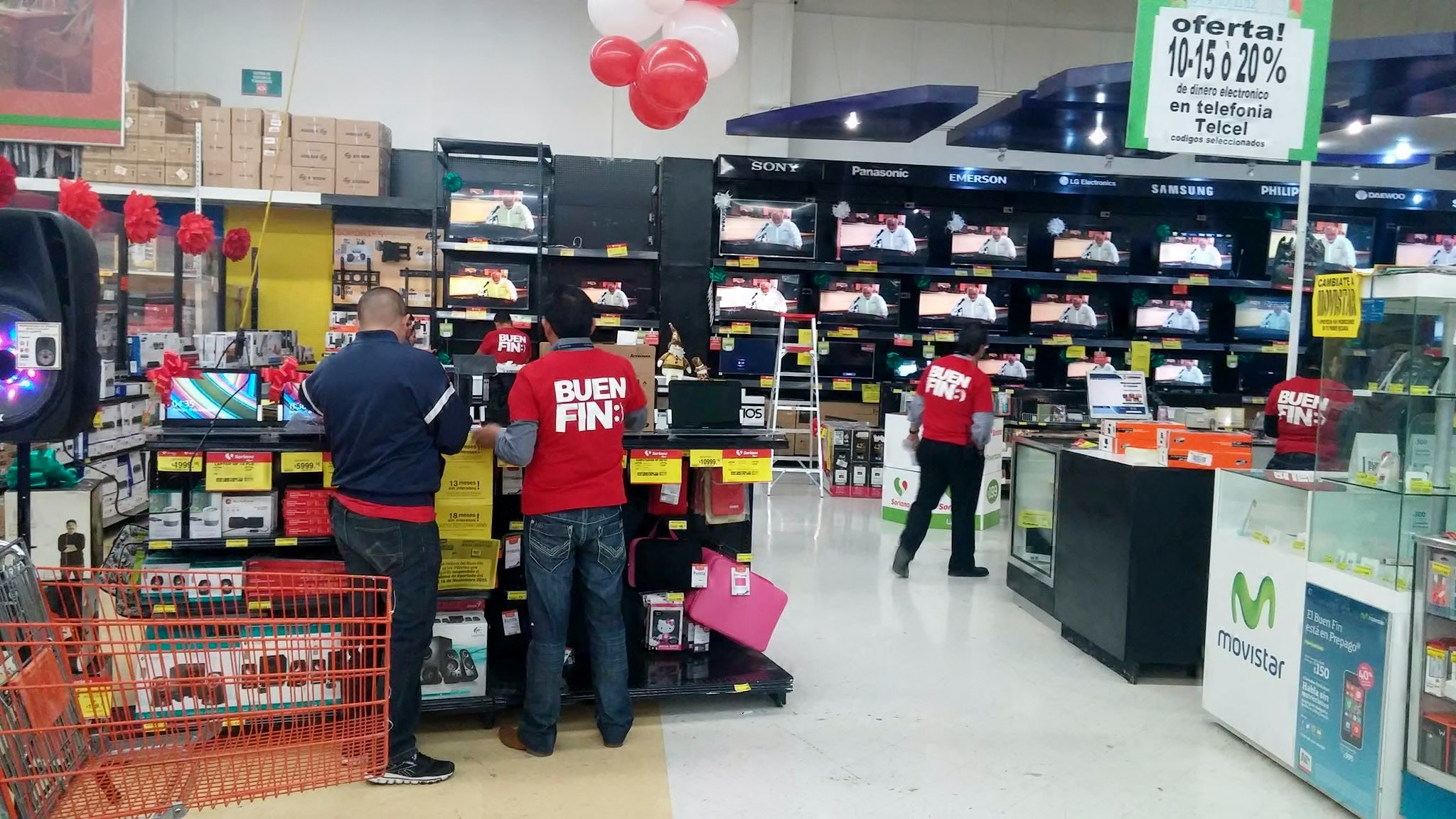 CD. JUAREZ– People gather in the electronics section of Walmart two weeks before Black Friday with their shopping carts still empty, going in circles among the store’s sales staff, who today wear red T-shirts announcing “the cheapest weekend of the year.”

As they tell shoppers that the price for the 60-inch flat-screen TV in front of them is the lowest they will ever see, someone with a microphone urges shoppers not to wait until Black Friday to do their Christmas shopping: “Forget about the long lines, ‘the good weekend’ is here.”

El Buen Fin, dubbed the Mexican Black Friday, took place from November 13 to November 16 this year. In past years, El Buen Fin has rung up to 197 billion pesos in sales, according to the Confederation of National Chambers of Commerce (Conacaco), This year was expected to bring in between four to eight percent more.

While El Buen Fin has been successful in most parts in México since its inception in 2011, it hasn’t had the same success in border cities such as Cd. Juárez where shoppers have access to U.S. Black Friday sales. Some Juárez consumers find those offers to be much more attractive than the deals offered in El Buen Fin. On Black Friday items in the U.S. can be discounted by 50 percent or more. El Buen Fin regularly offers discounts of up to 20 percent.

“They do a lot of advertising but these are not really discounts,” said Verónica Cordero, who last year bought a new kitchen during El Buen Fin. “What they offer is interest-free monthly payments. One goes into debt all year trying to pay for something that wasn’t cheap after all.” But this year the Mexican peso has weakened significantly in value against the U.S. dollar. The most recent exchange rate is almost 17 Mexican pesos to the dollar, while during last year’s El Buen Fin it was 13.61. For this reason, many consumers on both sides of the border considered doing their Christmas shopping in Mexico during El Buen Fin where they could get more for their money.

“I had never shopped [in Juárez] but since the dollar is very expensive right now, I came to see if there was something good,” said Arturo López, a shopper from El Paso.

He said he found a living room set which, despite being lowered only 15 percent from its original price, was still a bargain.

“It ended up costing me less than $700. It wouldn’t have been possible to find it that cheap in El Paso. Not a good [living room set] like this one.”

But some Juárez shoppers were not as excited with the deals offered. Despite the “expensive dollar,” many juarences decided that their money was better spent during the Black Friday sales across the border:

“ I still think that it is more convenient to buy [in El Paso],” said Maura Jiménez, who has been going to Black Friday sales since she moved to this border 23 years ago. “The taxes are high but they give those back to you if you are Mexican, so I think it is still better to buy there.”

“There’s a lot more people than last year but they are not buying a lot,” she said.”People want to see if it is better for them to buy here, but I don’t think so. They are not taking a lot of things.” Even though the disappointment was great for many Juárez shoppers, people like Susana Morales were not surprised at the lack of deals.

“I didn’t even go to see the TVs and all that because I know those are not really reduced.” she said. “I only bought shoes. They were cheap. Only the little stuff (are good deals), like shoes and sometimes clothes, but that’s it.”

Others like Rosario Quiñonez don’t have the option of going to Black Friday sales and hope to find some good deals during El Buen Fin.

“I don’t have a visa to cross to El Paso, so I have to shop here. I’m still paying debts from last year, but one has to do this year’s shopping anyway,” she said.

Quiñonez also said that the fact that Christmas bonuses were distributed earlier helped her decision to shop this year’s Buen Fin.

Tthat was a good thing. Last year I got everything on credit but now I can pay in cash.”

When given the choice, Yesenia Medina said she’ll continue to choose Black Friday over El Buen Fin, even if it isn’t as convenient crossing the bridge with the holiday crowd.

“I prefer to spend hours in the line than staying here, waiting for deals that will never be like the ones in El Paso.”

Medina also says she is not afraid of the chaos in the stores during the Black Friday sales.

“It is only one time a year, anyway. Like people say ‘once a year cannot hurt’” she said, citing a famous Spanish proverb.