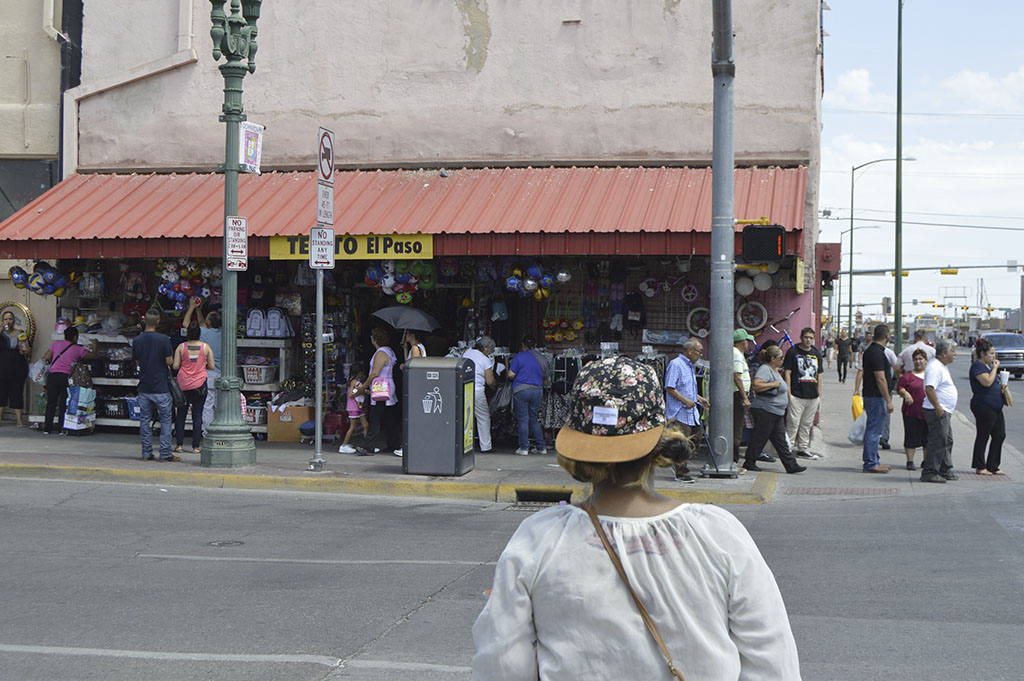 EL PASO – Six months after the downward slide of the peso in Mexico began squeezing the pocketbooks of Juarez residents, El Paso is starting to feel the sharp impact of less goods being sold on this side of the border, officials say.

“I mainly come to El Paso to buy clothes for my son, the jeans and shirts he likes are cheaper here,” said Dona Maria Guadalupe Pacheco, a resident from Ciudad Juarez, who comes to El Paso to buy the items she needs. “I cross the bridge twice a week, I shop here in downtown El Paso. Due to the high price of the dollar, I cannot spend as much money as I used to spend before, I remember spending 50 dollars, now I only spend 20 dollars.”

The value of the dollar in the last year has increased about 27.33 percent against the Mexican peso, according to the United States Federal Reserve Bank. The conversion rate of the dollar one year ago was 13.12 pesos per dollar; now it is 16.54 pesos to the dollar. Just like Guadalupe, thousands of people cross the border from Juarez to El Paso every day to visit family, shop, work and go school. But the weaker peso has brought down their purchasing power, threatening many small business owners in El Paso.

“Most of our customers come from Juarez. Once the price of the dollar went up some of the regular customers stopped coming,” said Luz Mendoza, who has worked for several years at Tepito-El Paso, a general goods store at El Paso and Paisano in downtown El Paso. “I can honestly say our sales have gone down about 80 percent.”

According to Dr. Tom Fullerton, an economics professor at the University of Texas at El Paso, “econometric research conducted at the border Region Modeling Project indicates that every 10 percent decline in the inflation-adjusted value of the peso leads to a 4 percent increase in retail sales in Ciudad Juarez.”

“Although data on aggregate retail sales are not published for Ciudad Juárez, indirect calculations indicate that roughly $9 million (US) in commercial transactions may have failed to cross the border into El Paso as a consequence of the currency woes in Mexico in 2015,” Fullerton said.

The drop of the Mexican peso is due to several factors.

In August, MetAnalisis Consultant Gerardo Copca, told the Associated Press that the causes of the drop of the Mexican peso are the “pressure from falling oil prices and an anticipated interest rate hike in the U.S.” MetAnalisis is a Mexican company that provides advisory services on financial markets. Also in August, Bank of Mexico Gov. Agustin Carstens told the newspaper Diario Reforma the causes for the record drop are global and external to Mexico.

Mendoza, a manager at Tepito-El Paso, said that sales were steady until the start of summer. “Starting June our sales started to go down little by little,” she said. Her store carries a variety of goods, from clothes to toys, and sodas to candies. The normally busy shop was practically empty one recent September afternoon. Several sales clerks kept busy stocking merchandise and organizing shelves.

Mendoza said that after sales began to decline, “my boss cut my hours. I am scared of ending up without a job.”

According to estimates in a 2014 Texas A&M University study, 10 percent to 12 percent of retail sales in El Paso are made by Mexican shoppers, which translates to more than $1.3 billion annually.

In August, Fullerton told the El Paso Times that lack of economic reform and corruption issues plaguing the Mexican government are also playing a role in the peso’s devaluation. “The ongoing uncertainties within Mexico dealing with policies and the political scandals facing the (Mexico President Enrique) Peña Nieto administration have played a role in this,” Fullerton said.

While sales activity from Mexican shoppers on the U.S. side of the border has decreased this year, a flip side is that it has contributed to increased sales activity at stores and shopping centers in Mexico, benefiting the Mexican economy. According to a recent study by ANTAD (Asociacion Nacional de Tiendas de Autoservicio y Departamentales) in Mexico, stores that have been operating for more than one year have registered an increment of 7.8 percent in their sales.

Alex (who did not wish to give his last name) has been working at Holland’s Department Store for almost ten years. “In all the time I have worked here, I have never seen the store this empty,” he said.

He lives in El Paso, but he goes to Ciudad Juarez every week to shop for groceries, “I like going to Juarez because I can buy more stuff with less money; some items are cheaper over there.” He said that the high value of the dollar in Mexico helps him spend wisely and save money.

According to some experts, the declining value of the peso could help Mexico in the long run. Jamie Moraga, President and CEO of intelliSolutions, a San Diego-based company that provides technical and operational services to businesses, “the decline of the peso may help boost Mexican tourism and exports, including Mexico’s large auto manufacturing industry.”

Although experts are reluctant to predict what will happen to the peso and Mexico’s overall economy in coming months, some are banking on the idea that the peso will make a comeback.

According to projections in a recent report by Merrill Lynch Bank of America, the value of the peso could reach 15.25 pesos to the dollar at the end of 2015. According to the Merrill Lynch analysts: “We expect a strengthening in both American and Mexican economies.”

Sergio is a multimedia journalism major at UTEP