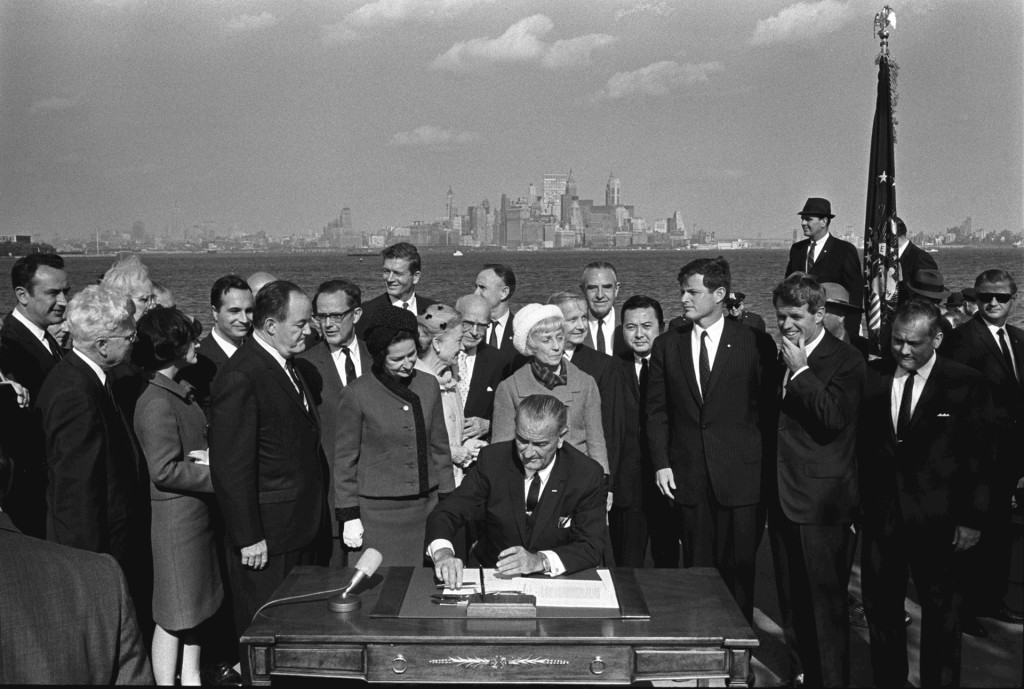 President Lyndon B. Johnson signs the Immigration and Nationality Act of 1965 on Oct. 3, 1965. This act abolished the national quota system and changed the demographic makeup of the United States. Photo by Yoichi Okamoto via Wikimedia Commons

WASHINGTON – The United States has long thought of itself as a melting pot, mixing cultures and customs from countries around the world. But it has often resisted adding more ingredients to the stew.

The history of immigration laws dates to the first in 1790 that allowed free white immigrants to become citizens after two years of living in the U.S. With comprehensive immigration reform still a matter of political and social debates, an important turning point in the history of how the United States arrived to its current deadlock can be found a half century ago.

Oct. 3 marked the 50th anniversary of the Hart-Celler Immigration Act of 1965, the historic law that changed the cultural makeup of the United States.

With the 2016 presidential campaign already underway, and House Speaker John Boehner leaving office once his replacement is chosen, advocates’ high hopes of a congressional vote on an immigration bill have dimmed in recent weeks.

It is said that history often repeats itself. Here is how the U.S. got to this point in the debate.

50 years and no quotas

President Lyndon Baines Johnson signed the Hart-Celler Act  in 1965, which sought to correct the 1924 Johnson-Reed Act.

That 41-year-old law established a quota system based on national origins. The system favored Northern Europeans, who accounted for 70 percent of the immigration slots.

This left people from everywhere else with a slim chance to immigrate to the U.S.

The 1965 law abolished the quota system and set a high priority on family reunification and those with skills to contribute in the labor force. It allowed U.S. citizens to sponsor the immigration of their immediate family members.

Most thought the bill wouldn’t affect the number of immigrants, but the so-called chain migration rules dramatically increased immigration.

A Pew Research Center study released in September found that 59 million immigrants have arrived in the U.S. since the Hart-Celler Act was signed.

Jerry Kammer, a senior research fellow at the Center for Immigration Studies, said the 1965 law opened the immigration flood gates.

“A U.S. green card is the world’s most coveted document. I think there are tens of millions of people in the world who would love a chance to come here with green cards that give them status of permanent residence and a path to citizenship, and it is the job of immigration policy to decide who gets those green cards,” Kammer said.

The question that remains is that 50 years after Hart-Celler, will there be change to the current U.S. immigration policy?

In 2013 the Senate passed the “Border Security, Economic Opportunity and Immigration Modernization Act” (S.744) which then was failed to be picked up by the House.

With Boehner’s time in office limited, this brings added pressure on him from some to bring up comprehensive immigration reform.

Rep. Beto O’Rourke, a Democrat from El Paso, Texas, knows the topic of immigration well. El Paso sits across the Rio Grande from Mexico and is known for its vast demographic of Latin American migrants.

O’Rourke said that he does not expect to see an immigration bill in this Congress. If anything is to happen, it will be after the 2016 elections.

“I would love it if in Speaker Boehner’s swan song we see a compromise immigration bill that is amenable to enough moderate Republicans and probably to every member of the Democratic caucus of the House, but I think that is a very tall order,” O’Rourke said.

He said that, 50 years after the Hart-Celler Act, it is time for a significant change in U.S. immigration law that will better reflect today’s reality.

When looking at the surge in population growth over the past 50 years it is important to ask what the  country will look like in another 50 years.

“As we look ahead to the next 50 years … it is important that we have a bit of modesty about our ability to project that far into the future. Projections that are dealing with current or recent circumstances and imagining that they will continue into the future,” he said.

O’Rourke said it is important to realize that there are issues that must be fixed.

They include offering immigrants a path to citizenship that they in turn would adhere to if immigration reform is passed.

“There is a deliberate but fair path to ultimately apply for citizenship and recognize the fact that they in many cases have been contributing members of our communities for decades,” O’Rourke said.

Reporter Amanda Guillen is a Fall 2015 reporter for the SHFWire from the University of Texas at El Paso. Reach her at amanda.guillen@scripps.com