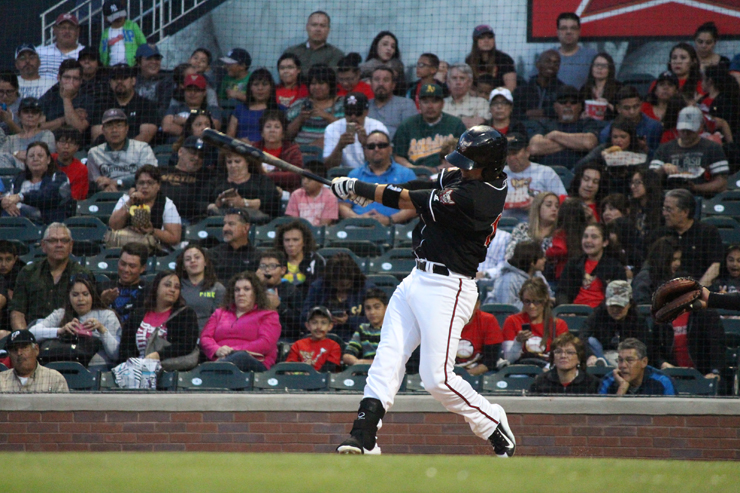 EL PASO – There are nine Mexican-born baseball players currently on a major league roster. Ramiro Peña, El Paso Chihuahuas shortstop, is looking to increase that number and return to the majors taking a route uncommon for him. At 29 years old Peña went into this year’s spring training without the security of a guaranteed contract, all he had was a minor league one.

“It was a little different (spring training) because I had already had various years with a guaranteed spot in the major leagues,” said Peña, who has played with the New York Yankees and the Atlanta Braves. “But here we are working hard to return to the major leagues.”

Northern Mexico is known for being the country’s biggest proponent of baseball, but, even there, Mexico is still predominantly a soccer nation. Tigres and Rayados—both teams of the Liga MX soccer league—dominate the headlines in the city of Monterrey. “The truth is soccer never interested me,” Peña said. “I was happy with glove and a ball, always hitting it against the wall.”

Following in the footsteps of his father, who never played professionally but did pass on his love for the game and the importance of hard work, Peña developed his skills and quickly started to see results.

The fact that Peña, naturally right-handed, can bat on both sides of the plate is a testament to the kind of work he has always put into his craft. Ever since he was able to carry a bat, he would alternate at bats — first on the right and then on the left.

Now he has an extra advantage every time he faces a pitcher.

After a couple of years playing in the Mexican baseball league with Sultanes of Monterrey, Peña and his talent were noticed by scouts from the New York Yankees and in 2005 he signed with one of the most important franchises in all of sports.

At 19 Peña did not go straight in to the Yankee Stadium clubhouse. He had to wait four years, while he went through the various minor league affiliates, before he could dawn the legendary pinstripes.

During those four years in the minors Peña continued to showcase his abilities and standout. In 2008, while playing for the Double-A Trenton Thunder, he was recognized as one of the young players with most promising future when he was selected to play in the All-Star Futures Game.

“It was a beautiful experience to have been able to play in the old Yankee Stadium,” Peña said. “I enjoyed it very much.”

It wasn’t long after his appearance at the old Yankee Stadium before he was back, this time at the new Yankee Stadium and as a member of the Bronx Bombers.

That first year could not have played out much better.

Peña made his major league debut on April 6, 2009 as a pinch runner, and three days later he got his first hit against the Baltimore Orioles. That season Peña was called upon by manager Joe Girardi on 69 occasions, scoring 17 runs, getting 33 hits and one home run.

In a team full of stars like Derek Jeter, Alex Rodriguez, Mark Texeira, just to name a few, the opportunities for the Mexican rookie were scarce. Still, he was able to experience every baseball player’s dream.

Peña and the Yankees made that year’s World Series and lifted baseball’s most coveted trophy after beating the Philadelphia Phillies in six games.

“It was an unbelievable experience, just being part of that organization,” Peña said. “Imagine, my first year in the major leagues and winning the championship was a blessing. It was a great experience and I will never forget it.”

His numbers improved slightly the following year but the opportunities remained minimal. After the 2012 season, in which he saw action in just three major league games, Peña became a free agent and left the Big Apple to sign with the Atlanta Braves.

A shoulder injury limited his participation with Atlanta, and after playing just 50 games in 2013 and 81 in 2014, the Braves released him.

That’s how he ended up in the border, playing close to his home country.

Peña signed a minor league contract with the San Diego Padres and, after failing to make the Friars’ 40-man roster, he was assigned to their Triple-A affiliate in El Paso.

“The truth is it’s very nice having the country where you born and raised so close,” Peña said. “That Mexican warmth is always present here.”

Still, and despite his enjoyment of playing in the border, his goal of returning to the major leagues remains unchanged.

In a team like the Chihuahuas, which is young and inexperienced, Peña’s character and experience have placed him as one of the leaders inside the clubhouse. Those characteristics might be the key for him to soon be on our televisions playing for another border city, San Diego.