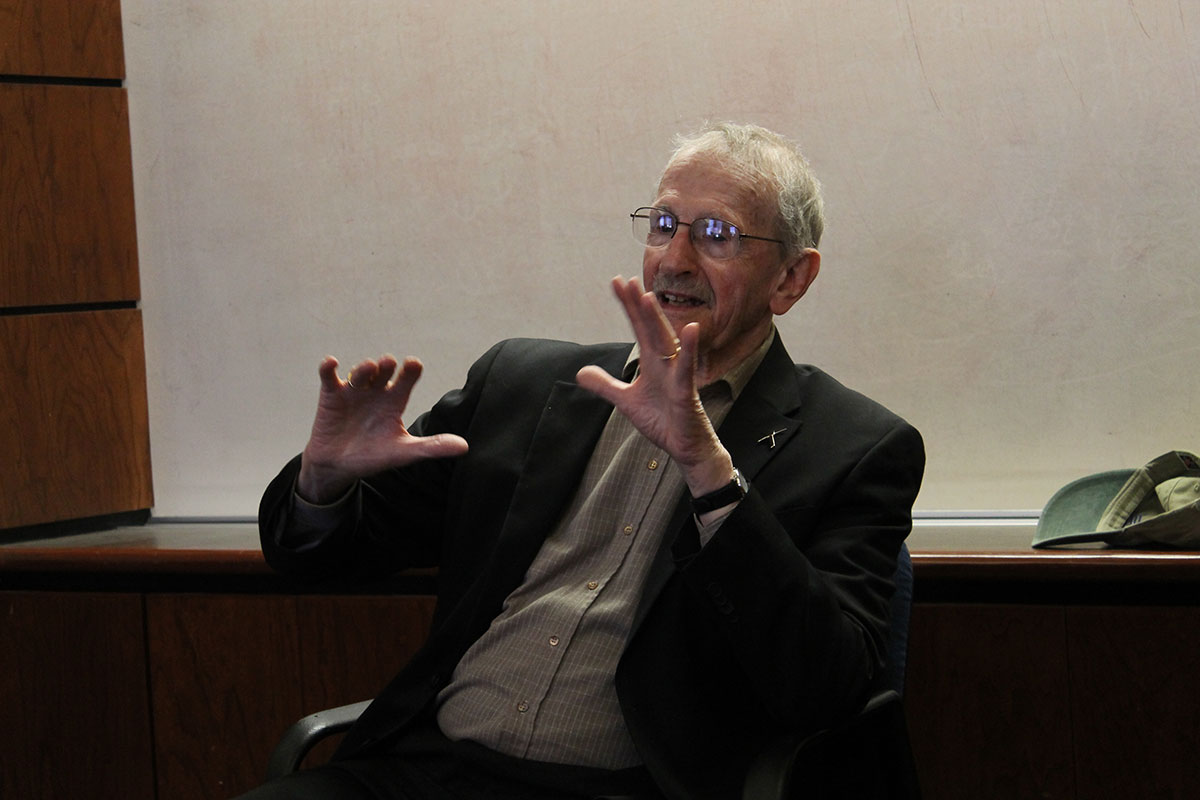 Editor’s note: U.S. Poet Laureate Philip Levine died Feb. 14 in Fresno, Calif. at age 87. In 2013, the poet known for giving “a voice to the voiceless” spoke at UT El Paso and spent time visiting classes and talking with students and faculty. Here is Borderzine’s story of that visit, originally published March 29, 2013.

EL PASO – Poet Laureate Philip Levine, still as fit and funny at age 85 as he was as a young man working the night shift at a car factory, shared his special brand of earthy, poignant and insightful poetry – and a sizable measure of good humored repartee ­– with over 1000 fans at UTEP recently.

The poet of the working class, who was born in Detroit to poor Russian Jewish immigrant parents, began writing professionally in the early 1950’s and has been giving “a voice to the voiceless” ever since. His message and poetry resonated with his El Paso audience in a city that is predominately Hispanic and working class. Asked by Sociologist Gina Nuñez what he thinks of the billions spent by the U.S. government erecting walls along the 2000-mile border, Levine responded: “The worst walls are the ones we can’t see because we are erecting interior walls. You say they’re dividing families. They’re also dividing ethnic groups. They’re dividing us from ourselves by creating aspects of ourselves we can’t welcome into the total soul of ourselves.”

Equating the border fence to the Berlin Wall, he added: “It will fall. It will fall, and we will see. We will reflect later on. By we, I mean the people who care and people who study, and eminent historians, of what a fiasco it was.”

During an evening lecture to a packed campus lecture hall, the poet demonstrated his empathy toward the immigrant experience and the political hardship caused by divided borders. “We have a long way to go to become the country we say we are,” he quipped. “Will we do it? Don’t ask me, kid. I sure hope so, but I know it’s not going to happen in my lifetime. But that’s not saying much. I’m 85. Who knows how long it’s going to go.”

“[His poetry] demands in an incisive and thundering voice that we listen to… the voices of those who without Levine’s throat would not otherwise been given a voice,” said Pimentel, who helped organize Levine’s visit to UTEP and is a well-regarded published poet in her own right. A former Philip Levine fellow, Pimentel said she treasures Levine’s “utter compassion” to write about “people we ourselves in El Paso know and understand. About men in overalls and a woman in a black smock at the polishing wheel, about feet and rubber boots, and children, their heads bowed low in a classroom in Fourth grade. We could recognize our mothers and our brothers in the work of Philip Levine.”

The crowd cheered inside the UGLC auditorium when the 2011-12 Poet Laureate walked to the podium and began to speak about the different chapters of his life, his early decision to become a writer and his dedication to giving voice to the lives and concerns of everyday Americans.

One moving poem, “My Father with Cigarette Twelve Years Before the Nazis Could Break His Heart,” dealt with Hitler era Germany, and ended with these lines:

that the villages were gone. The truth is—
if there is a truth— I remember the room,
I remember the flame, the blue smoke,
how bright and slippery were the secret coins,
how David Copperfield doubted his own name,
how sweet the stars seemed, peeping and blinking,
how close the moon, how utterly silent the piano.

After the reading, Communication Professor Andrew Kennis asked him about the differences and similarities between journalism, poetry, and fiction.

Without missing a beat the poet responded that much of journalism today is fiction. “The problem is it isn’t written as well,” he said to laughs from the audience. “As for poetry, it’s a different discipline. Of course it draws from the same source: events, objects and people in the actual world, but it uses them in different ways. It is not journalistic because it feels no obligation to the facts.”

He also had some words of advice for aspiring writers: “Do the best you can, and be patient…because it doesn’t happen overnight.” The 18th U.S. Poet Laureate said he was once asked what advice he had for a 25-year-old wannabe writer. “I thought about it a long time and the answer was very simple: take better care of your teeth.”

Earlier in the day, Levine spoke to a group of 20 Liberal Arts Honors students in a classroom.  The students are enrolled in a special honors class, taught by Nuñez and journalist Zita Arocha, which combines ethnography and journalism to study issues of social class on the U.S. Mexico border.

When one student asked his views about Anarchism during the Spanish Civil war, Levine addressed reactions to unjust political structures and discussed his own political frustrations.

“I am in part a contributing member to the American Society, which I recognize has many very ugly aspects about which I can do almost nothing.” In his youth, Levine said, he thought he could “do things.”

During his one-year appointment as Poet Laureate he said he had a chance to voice his concerns and speak out about government policies and decisions he disagreed with.

“I would get a call from the Library of Congress asking if I would just tone it down a bit. And every Monday I said I’ll do my best to tone it down,” he said. “And I did, which was that I did nothing. I said what I wanted to say. I was only going to have this position for a short while so why not get out there and insult people.”

When he responded to questions from the class, Levine’s sharply honed extemporaneous wit made everyone laugh several times. When Arocha used an iPad to snap his picture a relaxed Levine chimed: “Are you trying to take my picture?

“You haven’t gotten my permission.”

“I’m a journalist; we don’t need permission,” said Arocha, smiling. “I’m actually tweeting some of what you’re saying. You know what that is right?”

The room exploded in laughter at the quintessentially comic Levine response.

One student asked what made him leave his night shift job at the Gear and Axle automobile factory and use his savings to go to college and study creative writing at age 25 at the University of Iowa.

“To answer in all honesty, I would say my divorce.”

He noted that during his second semester at Iowa he ran out of money and couldn’t register for classes but sat in anyway on a class taught by renowned poet John Barryman. “He was the greatest teacher I ever had. I never needed another teacher,” Levine said.

“You can be anything and be a great poet. It’s not politically correct. That is the wisdom of an old man,” concluded the energized Levine, donning a green baseball cap to avoid “looking like the head of a corporation,” as students and teachers gathered around him for a picture.

As Pimentel began snapping pictures, she said: “Okay, everyone squeeze in. After the conversation about sex, you guys shouldn’t be shy.”

Before departing, the ever-humble Levine offered one last quip: “I would love to thank all of those who were responsible for bringing me here… They’ve worked me like mad, but it’s all right.”

Philip Levine shared with the audience different chapters of his life and his early decision to become a writer. (David A. Reyes/Borderzine.com)

Levine signed copies of his books after a presentation to over a thousand people at UTEP. (David A. Reyes/Borderzine.com)

U.S. Poet Laureate, Philip Levine, at a recent visit to the University of Texas at El Paso.