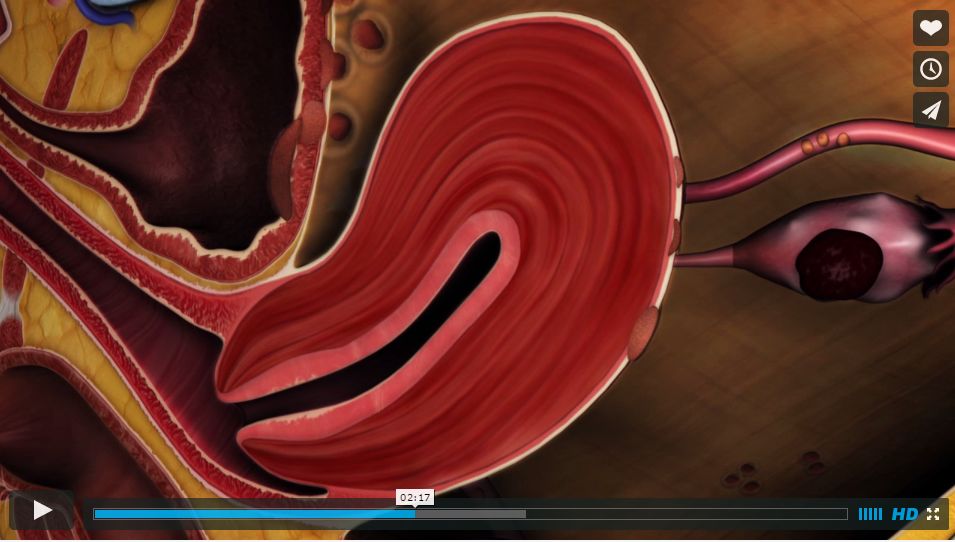 With endometriosis the lining of the uterus grows outside the uterus.Video image capture courtesy Endometriosis.org.

EL PASO — Melissa Ronquillo, was a teenager when she first experienced some painful and bewildering pelvic cramps and pain that radiated down her legs. The mystery discomfort continued for years until at age 24 it was diagnosed as endometriosis With endometriosis the lining of the uterus grows outside the uterus.Video image capture courtesy Endometriosis.org.

“I have painful cramps, pelvic pain, heavy bleeding, nausea, and back pain not only during my cycle but in between, as well as when I exercise.”said Ronquillo,33.

Melissa Ronquillo, 33, first began having symptoms of endometriosis as a teenager.

The Mayo Clinic describes endometriosis,which affects 176 million women and girls worldwide, as a painful disorder in which the tissue that normally lines the inside of a woman’s uterus, referred to as the endometrium, grows outside.

The symptoms include nausea, abdominal pain, fatigue and in more severe cases infertility. Although there is no known definitive cause for the disorder, there are many treatments available to make life with endometriosis easier.

Although the tissue begins to grow outside of the endometrium it continues to act as it normally would – it thickens, breaks down and bleeds with each menstrual cycle giving it no way to expel from the body. The tissues eventually accumulate on the bladder, bowel, ovaries, cul-de-sac, and other nearby organs which lead to the development of adhesions and scarring.

Diagnosing endometriosis can only be done through a laparoscopy – a surgical procedure in which a fiber-optic instrument is inserted through the abdominal wall to view the organs in the abdomen. A surgical biopsy must be done in order to confirm endometriosis.

Sarah Garcia, 24 began experiencing endometriosis when she was 17, but wasn’t diagnosed until she was 19.

Sarah Garcia, 24, who is currently in the mid stages of endometriosis says, “I was first diagnosed at 19 years of age after complaining of severe pain in my right lower quadrant for about two years. During those two years, ultrasounds were done, however it wasn’t until my friend’s father, a gynecologist, suggested endometriosis as a cause for the pain. I went to my OB and he performed a laparoscopy confirming the diagnosis.”

The Endometriosis Foundation of America identified other disorders that are commonly mistaken for endometriosis including:

Due to lack of awareness about endometriosis, most women and girls suffering from the disorder are told to deal with their pain through contraceptive-based hormones and painkillers.

The Endometriosis Foundation of America is attempting to reach out to these women to let them know that there is a way to treat endometriosis without a hysterectomy and this is through laparoscopic excision surgery which is identified as the “gold standard of endometriosis treatment.”

Laparoscopic excision surgery removes all forms of endometriosis by cutting it out, and restores normal organ placement and function as well as treating pelvic pain and infertility. After surgery, symptoms are said to disappear or highly diminish. Only a small number of advanced gynecologic surgeons perform the surgery.

Ronquillo urges women to educate themselves about the disease and be their own advocates.

“For so long I didn’t know that my symptoms were not normal. I thought my symptoms were normal PMS symptoms. It wasn’t until a doctor felt very strongly that my symptoms resembled endometriosis that I learned that for a long time I had been suffering from something that actually had a name. I was even told before that it was all in my head. Women need to know it’s not okay to suffer that way.”

Women also have access to many endometriosis support groups. The Endometriosis Foundation of America is an organization located in New York that not only strives to bring awareness of the disease but also acts as a support group for those diagnosed with the disorder. Information: http://www.endofound.org/