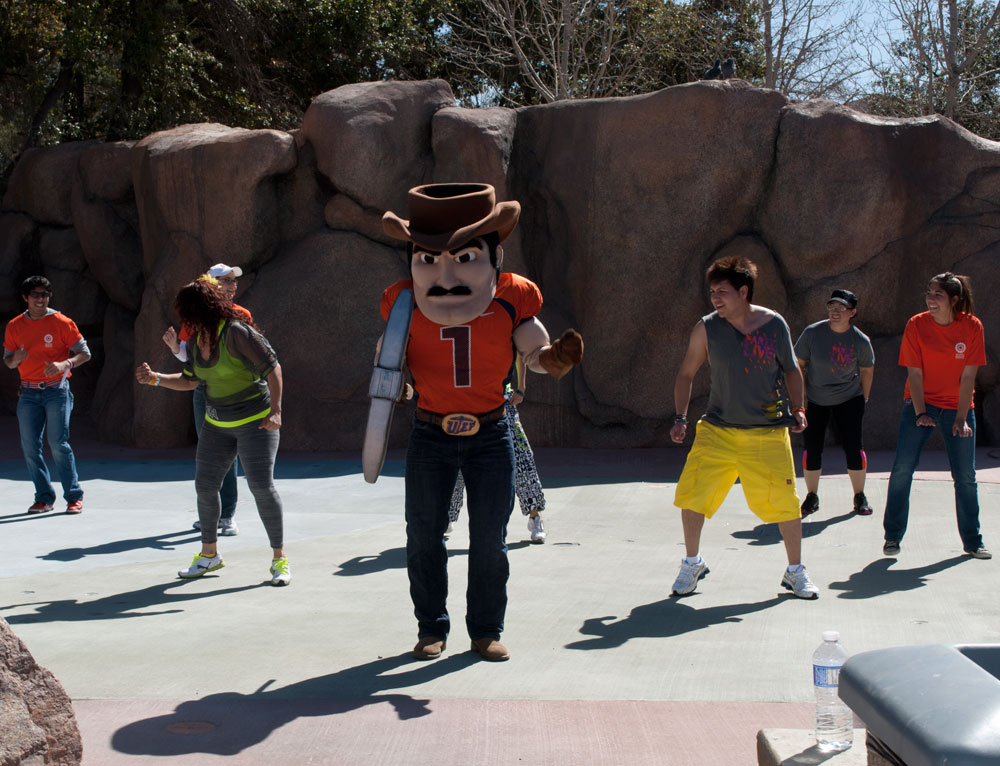 EL PASO – A different species of animal invaded the El Paso Zoo recently as some 20 community health agencies gathered there with the wildlife to focus the need human beings have for healthy living habits.

The El Paso Zoo and the Woman’s Health Initiative (WHI) program at the University of Texas at El Paso came together on Saturday the 26th of February to broadcast a message about diabetes, HIV, and ways to improve health in a fun way. The zoo was filled with UTEP students in bright orange school colors and members of the community.

“You can have fun and be healthy at the same time,” Arely Hernandez, member of the WHI, said. She added these types of events allow UTEP students to get their family and friends involved as well.

Ryan Garcia, another member of the WHI explained that having this event at the zoo was a new and fresh idea. He said it was a good opportunity to educate students about their health while they enjoy the zoo. About twenty community agencies were scattered across the zoo, including Rawlings Dental Clinic, LASIK Vision, YWCA, Beckmon’s Martial Arts Academy, and Tobacco Prevention. The most popular were Zumba classes, which encouraged people to dance and exercise and the Excel Learning Center, which offered free checks for sugar and glucose levels, and blood pressure.

With diabetes at epidemic levels here, where it is estimated that 25 percent of the population suffers from the disease or its precursor, many individuals still do not recognize the basic symptoms or know how to prevent or control the disease.  Alliance of Border Collaboratives also attended this event, delivering handouts with crucial information about the disease.

According to the Alliance, “about 1.2 million people or nearly 16 percent of the 8 million residents living along the U.S-Mexico border are reported to have diabetes.” Diabetes affects Hispanics disproportionately and El Paso is 80 percent Hispanic.

The handouts included contact information, addresses, and the date for World Diabetes Day, which is, November 14th and blue is the supporting color. Students of Beckmon's Martial Arts Academy give a demostration to the UTEP community. (Cassandra Morrill/Borderzine.com)

The Woman’s Health Initiative program received a $300,000 grant to promote HIV, and STD awareness. HIV also has a great impact amongst people in the border region.

“This is a great opportunity to reach out to a lot of people at once, because many people don’t know we give free HIV testing,” said Joanna Arriola, member of the HIV Prevention program.

In 2011 there were about 70 new HIV cases in El Paso according to El Paso Department of Public Health. Teenagers who are sexually active are at risk because of lack of knowledge about resources and protection.  There are many clinics here offering free testing, and many other resources to inform about HIV, STDs, and other sexually transmitted diseases.

“This was a great experience for me personally. I had a great time, showed school spirit, and learned so much about my personal health with all the tests I took and how I can improve,” UTEP student Armando Morales said.