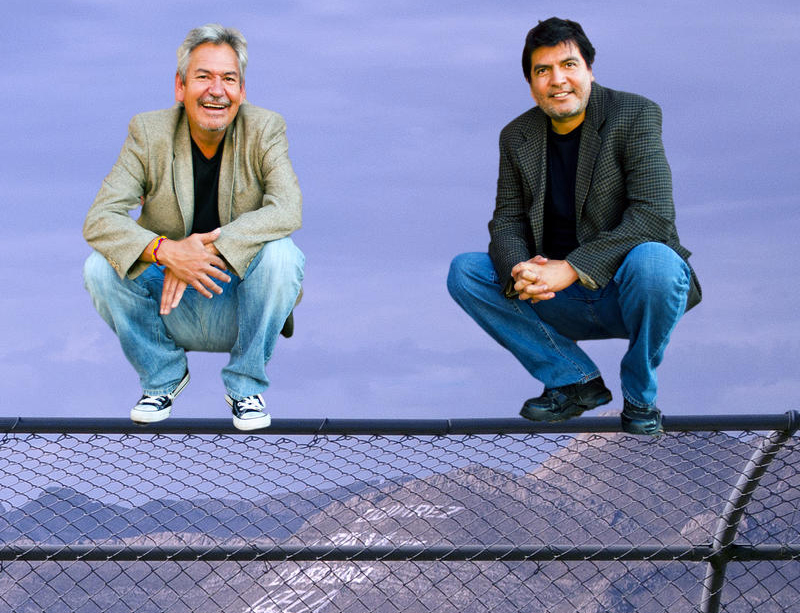 EL PASO – A little stubble on his face, a fedora hanging on an empty microphone to his right, Daniel Chacon is ready to record Words on a Wire, a KTEP-FM weekly radio show that showcases some of the best in creative writing.

The show, in its fourth year, is attracting listeners throughout the borderlands and beyond. That’s no surprise to the creator of the show, Chacon, a University of Texas at El Paso associate professor of creating writing and novelist who has a reputation around campus as being somewhat eccentric. A lover of reading and books since childhood (his favorite book as a child was “Danny and the Dinosaur”), several years ago Chacon began thinking about doing thought-provoking radio interviews with accomplished writers. With his fedora hanging on an empty microphone, writer Daniel Chacon is ready to record his Words on a Wire radio show on KTEP-FM.

After discussing the idea with then chair of the UTEP creative writing department, Benjamin Alire Saenz, they agreed to approach El Paso’s public radio station KTEP-FMA with the idea. They liked it. The first Words on a Wire show aired October 1, 2011, kicking off with an interview of Juan Felipe Herrera, California’s Poet Laureate.

Related: Chacon’s 10 books to read before you die

Saenz is an internationally acclaimed poet, novelist and children’s book author who won the PEN/Faulkner Award for Fiction in 2013. Together, he and Chacon showcase some of today’s best creative writing through book reviews and interviews with writers.

Along with humor and fun chatting with each other, Chacon and Saenz analyze books and interview writers. Not limited to local writers, the duo have interviewed writers nationwide. They have done more than 122 shows.

“We are the only literary show quite like this,” Chacon said. “What makes us different is that we are writers talking about books.”

The writer and the performer

Chacon is from Fresno, California. He earned his bachelor’s degree in political science from California State University at Fresno and his M.F. A in creative writing from the University of Oregon. Chacon began writing and editing for the Fresno State newspaper called La Voz de Aztan. He had an opinion column in the University paper, The Collegian, that dealt with campus politics and current issues. His earliest published work was a story called “Spring Break.”

With his humorous style, Words on a Wire brings out the best of both worlds for Chacon, the writer and the performer.

Words on Wire has established not only a local following in El Paso, but also a national following through podcasts and its Facebook page, which has 513 likes. According to KTEP’s latest Nielsen reports, the show, which airs at 12 p.m. on Sunday, has more than 2,400 listeners each week in the El Paso area. All the shows have been archived and can be heard at podomatic.com.

According to Chacon, the show has become so successful that they are now being approached by writers who want exposure to talk about their latest work.

A relationship with the written word

As a writer, Chacon said he has a lot of favorite authors he leans towards Latin American writers.

Of his own work, his favorite is always the one he is currently working on.

“It’s like a relationship, you don’t want to go back to old relationships, but be completely absorbed in the one you’re in,” he said.

As for Word on a Wire, Chacon said he’d always wanted to create a literary show with a mix of entertainment, education and in depth discussions of writing. The quality of the program is reflected in the variety of guests they attract.

The show recently featured recent work by Sergio Troncoso, winner of the Southwest Book Award and the International Latino Book Award for Our Lost Border: Essays on Life amid the Narco-Violence. Another recent guest was Lucha Corpi, poet laureate at Indiana University Northwest.

Dylan Landis was on the show for her latest book debut, Rainey Royal, a story Landis says is about “a girl growing up in the decadence of 1970’s New York whose mother abandoned the family.”

Landis was impressed with the show and the expertise of its hosts.

“Daniel asked complex questions with real discussion,” Landis said. “He had not only read the book but thought about the underlying issues of the character.”

Landis lives in New York, and studies psychology at Barnard College. In addition to writing fiction, she has also covered interior design for the Chicago Tribune and has published six books on decorating. She prepared for her appearance on Words on a Wire by listening to recent podcasts of the program.

“It seems that half the shows feature writers of color, that make it inherently diverse and a point of pride,” she said.

Reading as a way of life

Words on a Wire’s producer, Norma Martinez, is in charge of booking and finding guests for the show, as well as managing the social media for the program.

An avid reader, Martinez, says when she was younger she always had a book in her hand.

“I would read a 300 page book every week or two weeks,” she said. Martinez, who has worked at KTEP since 1989, said she enjoys the rapport on the show.

Always returning to the importance of literature, Chacon likes to end the program by saying, “and remember, the last book you read could save your life.”