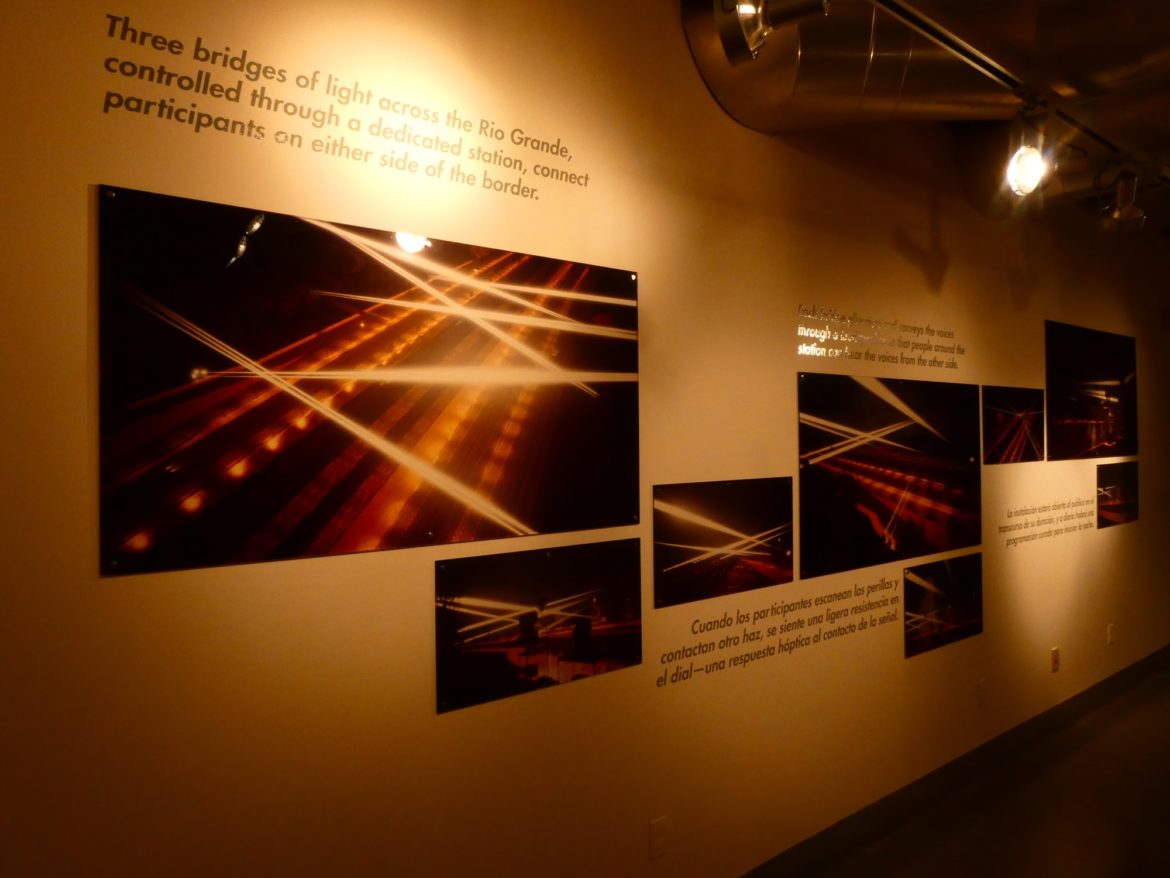 During 12 days in November, residents of El Paso and Ciudad Juarez had a chance to bridge the border divide with search lights and sound technology for two-way conversation in an innovative, illuminated art installation called Border Tuner.

The technology inspired art show is the brainchild of internationally known, Mexican-born artist Rafael Lozano-Hemmer, who has combined his artistic sensibilities with advanced digital technology to create and showcase other light and sound art installations in cities around the world, including Washington D.C., Boston, Mexico City, Santiago, Chile, as well as cities in Poland, Austria and Germany.

“The idea is to highlight the very diverse connections that already exist in these two sister cities,” said Lozano-Hemmer at a recent meet-and-greet with local news media and staff at the Stanlee and Gerald Rubin Center for the Visual Arts on the UTEP campus, which is coordinating the project with partners in Ciudad Juarez.

The twin cities, he explained, “are connected historically, fraternally, economically, environmentally; so what we want to do is to make sure that this is a platform for people to talk and tell a different story than what we normally hear in the media about the borderlands.”

And, to demonstrate how communication technologies can be used to bridge political, geographic and national boundaries, he said, “the conversations are going to be livestreamed across the globe at bordertuner.net, and the bottom line is to listen to each other. That’s the spirit of this project.”

Border Tuner went live Nov. 13–24 in both cities – at Bowie High School in El Paso and El Chamizal Park in Ciudad Juarez. The program started nightly at sunset and continueD until 11 p.m. and showcased the work of community organizations, an educational resource center, and other artworks.

Lozano-Hemmer, who lives in Montreal, explained how local residents can participate: “The idea is to create bridges of light using powerful searchlights… that actually send the voice of people across the US-Mexico border. When you arrive, you’ll have a microphone, a speaker, and you’ll have a little tuning dial. When you turn the tuning dial, the searchlights scan the horizon of the other country.”

“When my light and your light intersect in midair, the computer knows it and automatically opens a direct channel of communication so that now you can hear me and I can hear you,” he said.

At the start of the evening, before handing the instruments and mic to the public, there were short curated conversations on topics like slam poetry, indigenous communities, music, feminism, environmentalism, and binational/borderland history.

“The idea of tuning, of listening to others, is exactly what we need at this time: politically and culturally. The symbolism of using the technology of light to transmit voices is such that you as an individual are being seen and heard. Your voice is a bridge to connect the two countries.” 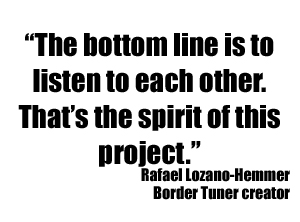 Kerri Doyle, director of the Stanlee and Gerald Rubin Center for the Visual Arts, worked with curators at the Universidad Autónoma de Ciudad Juarez to bring the project to the borderland. She said the process of coordinating, planning, curating, fundraising and finding partners for the project took a long time and lots of work.

“There’s a lot of under-the-radar work that went into this installation,” Doyle said. “We’ve actually spent most of the past year getting permits, making sure we have all of the technology in place, as well as getting both cities involved.”

Funding for the project in the U.S. came from the Mellon Foundation, VIA Art Fund and Bloomberg, and in Mexico from Arte Abierto and Novamex, with local in-kind support from Transtelco. Doyle said Lozano-Hemmer waived his fees and donated in-kind design and fabrication from his studio Antimodular Studio.

His previous art projects also make use of searchlights and other powerful electronics and include The Trace (1995), Vectorial Elevation (1999), Amodal Suspension & 1000 Platitudes (2003), and Pulse Corniche (2015).

The artist began thinking 10 years ago about creating a unique art installation for the border.

“I’ve wanted to make a piece that would connect Ciudad Juarez and El Paso, but I had an idea originally that was totally bad,” he laughed.

“My idea was to originally put on a light show like the ones I’ve done for the Olympics and for cities around the world,” he said. After giving it more thought, he decided the border art installation “should not be a spectacle. It’s about intimacy… it should also not be (about) controlling the lights but that we’re allowing our communities to control them and somehow listen to conversations.”

As a native of Mexico City, he said, the border divide has always intrigued him.

“For me what this project is about is trying to tell different stories of El Paso and Ciudad Juarez’s relationship. And of the United States and Mexico’s relationship. Not the narrative of a border [wall], and not drugs, rapists, or all these things, but rather another world; a world of coexistence, interdependence, and a world where community brings together people in a way that is really a beautiful example for the rest of the world.”

How to join in

Amanda Pracht is a multimedia journalism major at UT El Paso with a minor in theater arts. She plans to graduate December 2019.