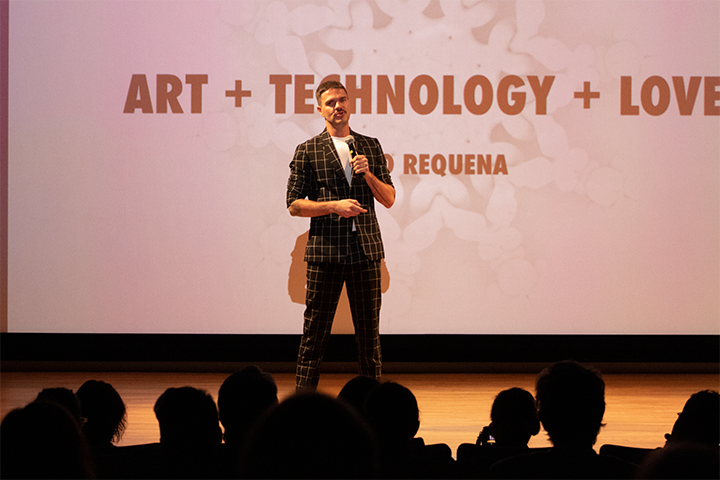 El Paso recently became the second site in the nation for an innovative, international event called CODAsummit focused on showcasing the intersection of art and technology.

The three-day event, produced by CODAworx at the El Paso Museum of Art downtown, drew hundreds of local and out-of-town artists, technologists, innovators, museum directors and others to share innovative ideas and brainstorm ways to combine art and technology in public installations making them immersive and interactive.

The first CODAworx event was held in Santa Fe in September 2018, the second in El Paso in October, and a third summit is expected to take place in Denver in the future.

Related: Border Tuner to create bridges of light across El Paso-Juarez sky so residents of both sides can listen to each other

Ben Fyffe, assistant director of the city’s Museums and Cultural Affairs Department, said there is a sense of urgency to bring events like CODAsummit to the borderland.

“I would argue that there are few places that are as misunderstood, continually recontextualized, argued over, fought over as borders. El Paso is at the literal and figurative heart of the U.S.-Mexico border,” he said.

The current politicization and militarization of the border, Fyffe said, makes the region “really fertile ground for artistic and intellectual exploration.”

Among the presenters at the event were internationally recognized artist and architect Guto Requena, who has won several awards, lectured and exhibited in more than 20 countries, and Mexican-born artist Rafael Lozano-Hemmer, who will unveil in November a cross-border light and sound project Border Tuner in El Paso and Ciudad Juarez,

Brian McKutchen, owner of Ignition Arts, a custom-fabrication company based in Indianapolis that specializes in large scale public art projects and digitally-designed architecture, said he traveled to the El Paso summit “as a fabricator… to support the artists’ conceptual designs and help them make it in the real world.”

A year ago, McKutchen’s company fabricated a public art installation called Marquise at a west side natatorium in El Paso, is currently completing three more art installations in Texas and has two more on the drawing board.

“Texas seems like a state that is really pushing public art in the community, which is awesome,” he said.

Tracey Jerome, director of El Paso Museums & Cultural Affairs Department (MCAD), invited Sikes to hold the summit in the city after attending the first one in Santa Fe.

“We are in overdrive because there’s an understanding in this community of how important public art is. It’s place making. It’s about identity. It’s about making sure that we have pride in our community,” Jerome said.

“When I spoke to Guto… he told me he wanted to speak on art, technology, and love. Being the good mid-Westerner that I am, I went, ‘Love?’ Given everything that has happened this past year, I think it is a topic we should all be talking about.”

Requena, who lives in São Paulo, Brazil, said that when he looks at everyday objects like benches, bus stops, or even trash cans, he wonders, “why can it not be more than this? What if we can add digital technologies to provoke people to talk and smile?”

Requena’s previous project, “Can you tell me a secret?”, in São Paulo, did just that. The installation consisted of five wooden benches in the middle of the Coronel Fernando Prestes Square, in the Bom Retiro neighborhood, an area with a substantial immigrant population.

According to Requena’s website, the installation “invites passers-by to come in and share their stories, which are then recorded and played back randomly inside the furniture via speakers.”

The shape and color of the furniture, he explained, “came from the hybridization of the ten biggest countries that are living in that area. There is a private chamber where you are invited to narrate secrets about yourself. Then you sit on the bench and you hear random secrets.”

Requena was not shy about sharing his positive energy with many attendees who approached to discuss and express admiration for his work.

“In our life, we all have sad moments, but it’s on us to make the decision of not going to the dark and… sad space but instead looking to the sun and going to the beautiful side of life.”

In another Requena project, Light Creature, that appeared on a São Paulo hotel wall, the artist used audio sensors along with color-changing lights to measure air quality and volume in the city. A phone app allowed people to interact by voice or by drawing patterns.

An unintended result of the project, Requena said, was that during a political demonstration in São Paulo students used the app to change the colors of the building back and forth between the political party colors.

Lozano-Hemmer, who was born in Mexico and now lives in Canada, plans to return to the border region in November to unveil his art installation “Border Tuner,” a project that consists of spotlights placed at six locations in El Paso and Ciudad Juarez.

When the light beams (he calls them “bridges of light”) intersect in the sky above people will be able to talk to each other.

“At a time of intense adversarial nationalism, of racism, we need to create a system that allows us to hear each other,” he said.