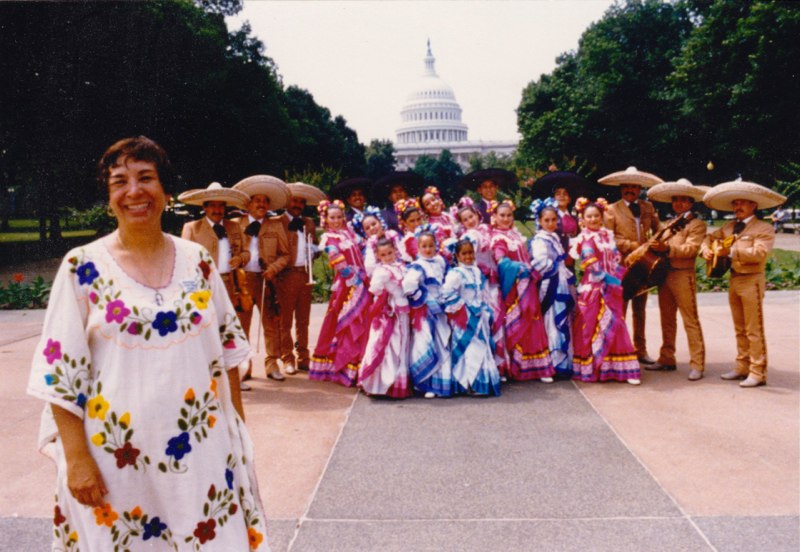 Rosa Guerrero traveling with her Folklorico group. Image from http://rosaguerrero.org/

EL PASO – Dressed in a bright orange jacket adorned with a necklace and a crucifix pendant, Rosa Guerrero flashes a warm smile, projecting the trademark youthful spirit and upbeat stamina that belie her approaching 80th birthday. Rosa Guerrero wearing a cross to display her faith. Image from http://rosaguerrero.org/

“Age is just a matter of the mind,” Guerrero said as she sipped her cranberry and orange juice drink, a mix she concocted herself. “If you don’t mind, then it doesn’t matter.”

Guerrero’s long resume in the professional dance world has not weighed her down. An avid dancer in all types of genres, a dance teacher of students that range in age from two-year- olds to 100-year-olds, and an ambassador for Mexican folkloric dance, her love for dance is evident in the rhythm of her hand gestures and expressive nature.

“I started dancing in my mother’s womb,” Guerrero exclaimed as she sculpted a simple dance move with her hands. Born and raised in El Paso, Guerrero has always been a dedicated individual who never settles for the bare minimum. Growing up without a car, Guerrero said she would walk to dance practice downtown from her central El Paso home.

“We did without a car,” Guerrero said. “It’s not a sin to be poor but it is a sin to be lazy,” she said, proud of her humble origins.

Frank Lopez, a friend of Guerrero for more than 10 years, first saw her in her dance element at a nonprofit performance. Lopez is an executive director of Ngage, a Las Cruces,New Mexico, nonprofit educational organization.

Lopez said Guerrero’s kind nature makes her unique. “She’s very down to earth,” Lopez said. “She gives as much of herself to her community.”

A Roman Catholic, Guerrero said her strong sense of faith has guided her. She describes herself as ecumenical — someone who has a love and respect for other religions, beliefs, and faiths.

“To me there is only one God and he is our father and our maker,” Guerrero said. “I believe that all religions are based on that creator.”

Lopez said that Guerrero takes deep subjects of culture and race that are usually difficult for others to be open about, and makes them poignant subjects.

Guerrero became immersed in other religions and cultures through dance. She is responsible for spreading Folklorico dance style throughout the United States after becoming the founder and artistic director of the Rosa Guerrero International Folklorico Dance Group. Guerrero said all individuals are unique and together make one giant tapestry, the title of a documentary she made that stresses this concept. Rosa Guerrero traveling with her Folklorico group. Image from http://rosaguerrero.org/

Guerrero’s nonprofit was the first Mexican folkloric dance group in the nation to dance at the Kennedy Center in 1991. They were also the first to dance for the CIA in 1992. Former secretary of defense, Robert Gates, was the CIA director at the time.

“He gave us a tour and he was very friendly to me,” Guerrero said.

Describing the performance for the CIA, Guerrero said the environment was very professional. Never letting go of her cheerful personality, Guerrero presented a gift consisting of El Paso Saddleblanket and Chile Company souvenirs to Gates on stage in front of the large conservative crowd. Guerrero said she jokingly told Gates that she is president of the CIA in El Paso, which filled the auditorium with laughter.

“All I did was break the barrier,” Guerrero said.

Dennis Bixler-Márquez, director of the Chicano Studies Program at UT El Paso, has known Guerrero since 1971 when he was a member of Teacher Corps. He said that Guerrero captures and represents what El Paso is about in an artistic sense through music and dance.

“What makes her inspirational is that she is a cultural ambassador for the city on both sides of the border,” Bixler-Márquez said. ​

Exposure of culture is important to Guerrero. Receiving bachelor’s degree from Texas Western College, now the University of Texas at El Paso, in elementary and high school education in 1957, Guerrero has worked at numerous public schools throughout El Paso to spread that idea. She hopes to spend the rest of her life writing.

“One written word is worth one thousand spoken ones,” Guerrero said.

Guerrero’s husband of 60 years, Sergio, three children and five grandchildren are strong figures in her life. She said everything she has wanted is to make her family proud. She is grateful for her parents and said she is thankful for anyone who has been a part of her life.

“God put you here and your parents give you your life,” Guerrero said. “The rest is up to you.”