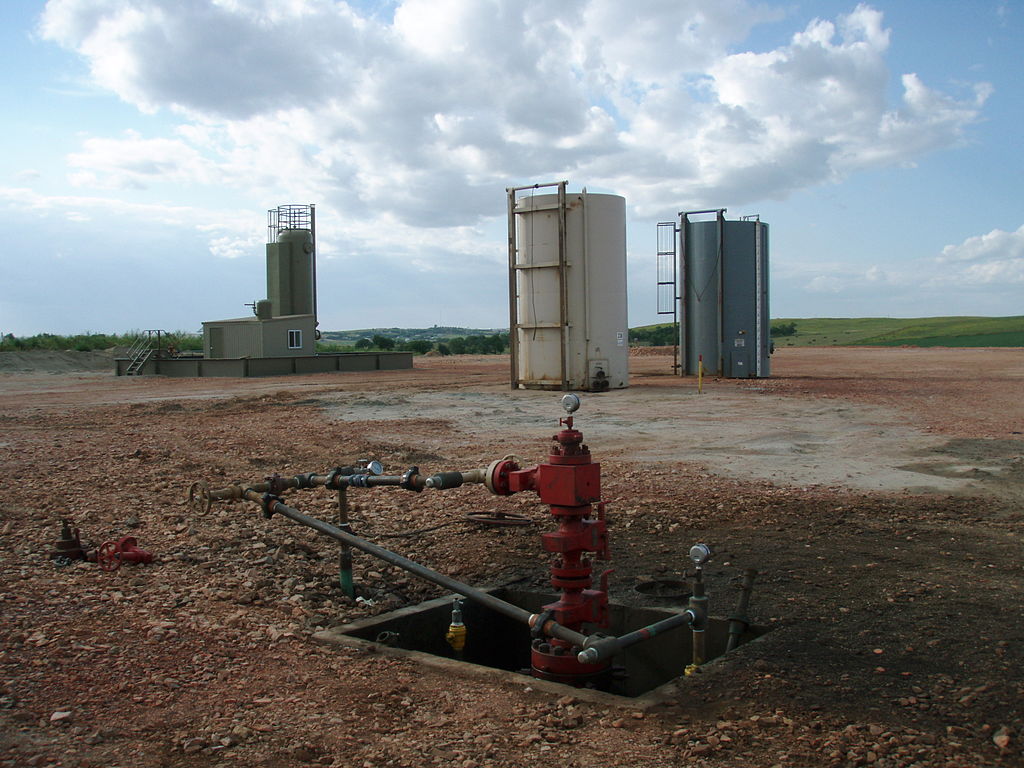 Well head after all the Fracking equipment has been taken off location. Photo by Joshua Doubek via Wikimedia Commons

EL PASO — Arnold Escobar leaves his apartment under the hot sun of Odessa, Texas, a desert region abundant in oil nicknamed the Texas Petroplex, drives past oil derricks and pumpjacks, to a remote well site where heavy machinery whirs loudly.

He slowly walks along the plant to get to the two-ton blender he operates and starts his work day, a long shift that can last 48 hours.

Escobar is a Senior Equipment Operator for Archer, an oilfield service company that specializes in drilling and well services. One of those services is the process known as hydraulic fracturing, “fracking” for short. Well head after all the Fracking equipment has been taken off location. Photo by Joshua Doubek via Wikimedia Commons

What Escobar does day in and day out he described as “using a big blender machine to pump a blend mix of water, sand, and chemicals down an underground well to help stimulate the well to extract gas or oil from that area.”

Hydraulic fracturing is the process of using fluids and materials to create fractures in the ground to stimulate (both existing and new) natural gas and oil productions. This is a significant enterprise the energy industry uses to try to extract natural gas in an effort to try to provide clean energy.

However, now some states are considering banning the practice citing environmental concerns that the groundwater is in danger of becoming polluted.

Even though the “fracking” process is heavily regulated by the oilfield service companies as well as the states where these businesses frack, there have been claims from citizens that some of the chemicals that they use in the fracking process have leaked into water reservoirs.

Many environmentalists, as well as residents of the areas that are prime for fracking, argue that this process is unsafe since chemicals that are pumped into the ground are leaking into existing ground and surface water. Another argument they pose is that the air around the area is also susceptible to contamination from the chemicals.

The EPA has conducted research on five new well sites from Pennsylvania, Colorado, Texas, and North Dakota, testing the waters around them. EPA investigators have already gathered preliminary results and findings from the wells and are set to gather more information and eventually release a final report later this year.

The preliminary results they have gathered have contradicted environmentalists as in the Pennsylvania case where they deemed the chemicals in the water did not exceed federal standard. In the Wyoming case, they made the state responsible for investigating the site.

Environmentalists argue that these outcomes stem from pressure by big oil and gas companies as well as the government, making the EPA unable to properly report findings on how fracking might affect water resources. There are no federal regulations on fracking at well sites. Instead, the responsibility belongs to the states, and in some cases it is left to the rigging companies themselves. A study done by hydrogeologist Tom Myers, a Nevada consultant who used computer modeling of how fracking fluids that are trapped in the Marcellus Shale would move over time, predicted that the chemicals used in fracking could move even faster to the surface and cause contamination.

The EPA also has been trying to write a federal law obligating all companies to disclose to the public all the chemicals that they use in frack sites, as most do already but some companies like to keep that information confidential.

With all the controversy that surrounds hydraulic fracturing, Stanford geophysicist Mark Zoback has defended the use of it, but he warns that the companies must do it with caution. He feels that most states aren’t doing it right and that the federal government should intervene just to make sure that standards are up to par.

“We know exactly what to do. It’s just a matter of making sure industry follows best practices, that we have good regulations in place, and those regulations are enforced,” Zoback told the Los Angeles Times.

Experts in the energy field say that the benefits of hydraulic fracturing are considerable as it provides essential gas and oil for everyday usage but it comes with the risk of polluting the water that we all consume. So the fact that it is on the verge of being banned in some states is alarming, especially for the workers that do the work.

Workers like Escobar, know that there are some environmental hazards that come with the profession, but he feels that is a necessary risk that they take with this process as long as they know how to do it right and follow regulations.

He posed a question, “What if production of oil or gas stopped for a week? Transportation, plastics, production, and most everything would come to a standstill. There are pros and cons to everything and we might take the risk with fracturing, but oil runs everything. Oil runs the world.”

One thought on “Fracking squeezes more natural gas from the desert, but it may also inject new pollutants”