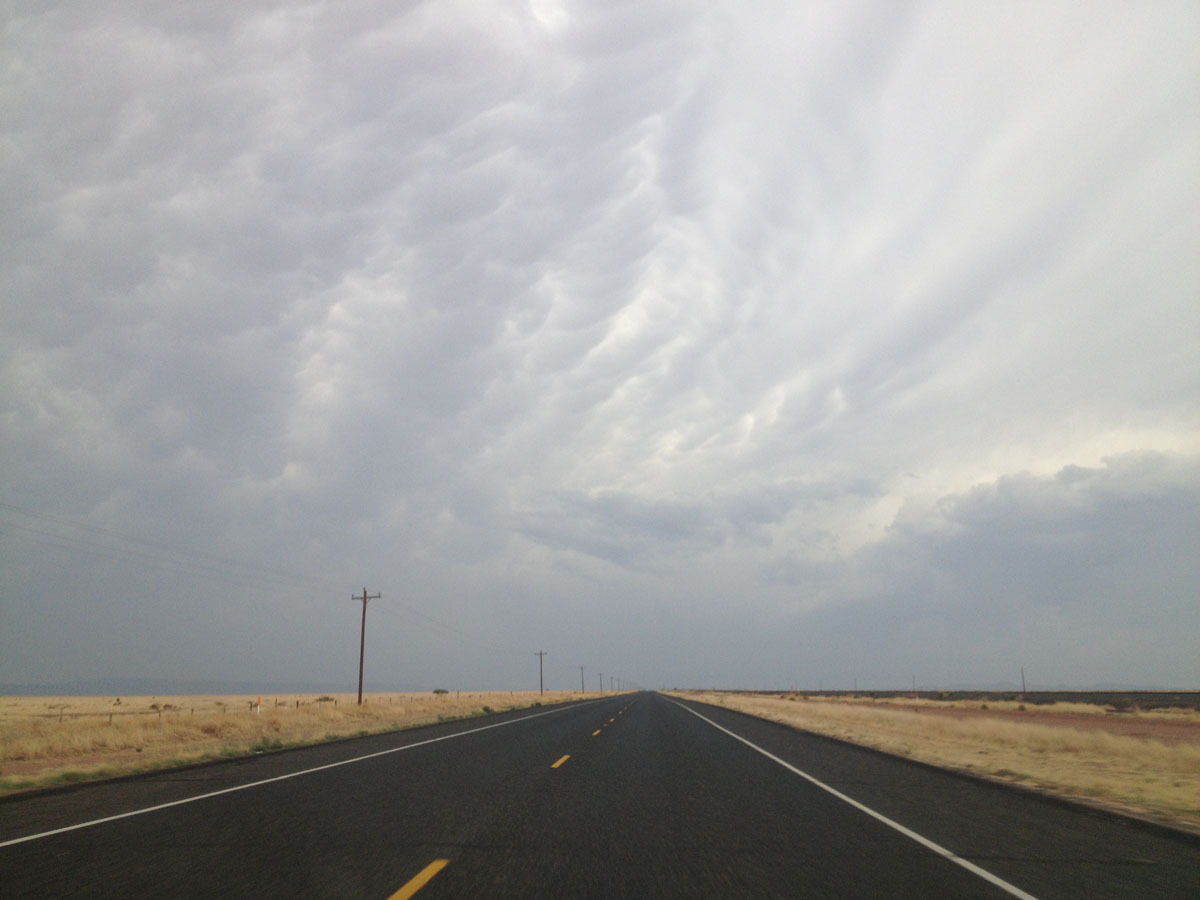 Storm clouds rolled in from the mountains and then over Highway 90. (Sergio Chapa/Borderzine.com)

After several days on the road, Lupita and I realized that we had fewer days ahead of us than behind us.

It was more than 100 degrees when we left the Rio Grande River plain in Presidio.

But it was a steady climb into the mountains as we headed north on U.S. Highway 67 back to Marfa. Storm clouds rolled in from the mountains and then over Highway 90. (Sergio Chapa/Borderzine.com)

In the rear view mirror, storm clouds could be seen coming in over the mountains of Mexico.

The wind was picking up and the higher the elevation, the cooler the temperature.

The brown and golden hills were only broken up by the ghost town of Shafter.

Although the former silver mining town has an official population of 11 people, we didn’t see anybody.

We drove past the bleach-white church and just north of town, we spotted Elephant Rock.

The unique rock formation is curiously shaped like a pachyderm.

But we drove on and ended back in Marfa where we made a pit stop to stretch and get a nice, cold drink on a hot day. Lupita and I were eager to get back on the road because the storm clouds we had seen earlier were catching up to us.

We headed west on U.S. Highway 90, which took us past an Air Force base where a blimp is stationed and used for border security patrols.

The storm clouds overtook us just before we reached the town of Valentine.

The blacktop of the road seemed to merge with the golden grass and blue-grey sky.

We ended up at Marfa’s “Prada Store,” a roadside art exhibit stocked with the company’s latest shoes and purses.

After snapping some photos, I left behind my business card for good luck and we continued west.

Lupita and I wanted to reach El Paso by nightfall but we also wanted to keep ahead of the storm.

Keeping ahead of the storm didn’t work out. A thunderstorm rolled in off the mountain and before we knew it, the wind started to pick up and we caught in a sand storm.

We pressed on but the sand storm turned into heavy rain.

Unphased by the weather, a train rolled alongside us until the road went under the railroad tracks.

Within a few seconds, the train vanished and we ended up in the Van Horn, the county seat of Culberson County.

Right when we got to town, something was wrong.

None of the traffic lights were working and none of the businesses had their lights on.

The storm had knocked out power to the entire town.

Purple lightning lit up the sky while heavy rain soaked the desert and the temperature fell. We splashed through puddles along the frontage road but made it to Interstate 10.

Traffic was slow but we started making our way to El Paso.

Just west of Van Horn is Hudspeth County, which is home to Fort Hancock and its international bridge.

Visitors passing through the area can exit Interstate 10 and take State Highway 20 through pine trees and farms. Not much water in the Rio Grande River at Fort Hancock International Bridge. (Sergio Chapa/Borderzine.com)

The Fort Hancock International Bridge is just a few minutes away from Interstate 10.

It was one of the loneliest border crossings we had seen on our trip.

We parked our car in the visitor’s parking at the U.S. Border Patrol station and walked across the nearby bridge.

There were very few cars headed into the dusty border town of El Porvenir, Chihuahua but Lupita and I were shocked by something else.

The mighty Rio Grande River was only moving as a trickle.

Water from the reservoirs of the Rio Conchos River flows into the Rio Grande in Presidio but upstream the river is reliant on snowmelt from the Rocky Mountains.

The Rio Grande is slowly drained passing through farms and dammed by the Elephant Butte Reservoir in New Mexico before reaching El Paso and the West Texas desert.

Although there is water in irrigation canals on both side of the border, there’s not much left for the river itself. The Tornillo International Bridge is the newest crossing along the border. (Sergio Chapa/Borderzine.com)

Located across from the town of Guadalupe Bravos, Chihuahua, the project seems like a bridge to nowhere.

There is little but modest homes, small-scale farming and a highway on the Mexican side of the border.

As for water, there was even less of it at the Fabens bridge than at the Fort Hancock bridge.

But that’s only looking at things on surface.

Throughout our trip, we have seen big public works projects and infrastructure improvements.

The groundwork is being laid out for the future of the border and the Tornillo bridge is no exception.

As maquiladoras and other industries expand in Ciudad Juarez, it becomes advantageous to send eastbound 18-wheeler loaded with goods away from the congested bridges of El Paso.

Like the Donna-Rio Bravo International Bridge in Hidalgo County, the Tornillo bridge is a bridge being built for the future. The border fence at the Fabens International Bridge. (Sergio Chapa/Borderzine.com)

Officials plan to close the Fabens bridge once the Tornillo bridge is complete but there’s just one problem.

At the time of our visit in June, construction had gone halfway across the Rio Grande River on the American side but hadn’t even started on the Mexican side of the border.

The bridge is supposed to open in December but that looks like it may be in jeopardy.

Lupita and I wondered if the money from the public works project on the Mexican side had been embezzled or if the project had simply been mismanaged.

One man on the American side of the bridge told us, “Don’t worry, they can do it pretty quickly on the Mexican side. They work pretty fast and don’t have to worry about environmental laws like we do.”