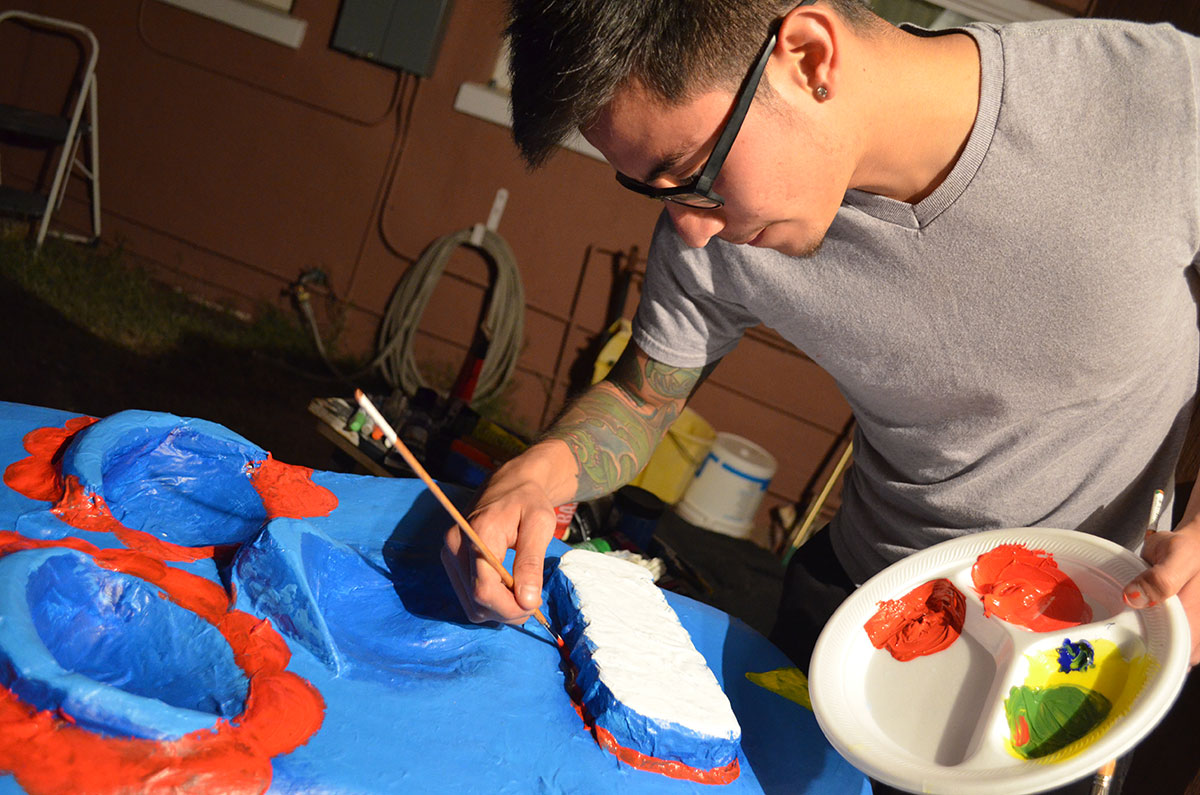 EL PASO – As Diego Garcia, driven by inspiration and the waves crashing on the shore, was on the very last stroke of his painting on the seawall at Venice Beach, next to mural-master Sano’s famous masterpiece, the beach patrol arrived and ordered him to stop painting and leave.

“I found a wall and I started to paint. I took one section that was all messed up,” says Garcia, 21, recalling one of his most memorable pieces from two summers ago when he visited Venice Beach, California. “I remembered Sano’s piece from a movie I had seen on Netflix filmed in 1992. I thought it was insane that I could be painting next to his piece.”

From drawing Ninja Turtles and Dragonball Z characters when he was a first grader to working on his art education at The University of Texas at El Paso, Garcia’s talent shines. While he had the option to go down a different path, he has decided to stick with art. Now he does paintings, graffiti, body art, street art, stickers and has even painted on shoes and caps. Garcia explains that drawing or sketching can get very difficult sometimes. (Valeria Hernandez/Borderzine.com)

“I’ve always had people tell me that I was good at it, so I took that into consideration, but I’ve seen people that blow me out of the water quickly,” said Garcia explaining how he got really serious about drawing and painting. “I feel like there are people that are better than me and I need to keep going.”

Garcia recalls entering many art contests in high school and winning second place more than once, until he finally placed first at one of Ysleta Independent’s regional art contests. The piece is a sketch of a beagle and Garcia says he picked that breed to draw because he owns one.

Growing up, Garcia would see graffiti on the walls of the local area and this deeply influenced him to draw more. Once he reached middle school, the people around him made him realize that the tagging around the area actually was gang related. He also became aware of the potentially good things that could come out of street art and graffiti.

“I would see writing on walls but I didn’t know what it was or what it meant,” said Garcia, son of Mexican immigrants from Zacatecas, “As I grew older, I began tagging. When I got into high school I realized what it really was and I saw there was more potential.”

Even though society is driven largely by profit, Garcia believes that his love of art is not about the money and fame. One of the reasons why he is an art major at UTEP and wants to become an art teacher is to influence kids who might go down the wrong path and inspire them to become something better.

Garcia knows that the arts are usually the first programs to be cut in school districts, but he said these programs, including dance, band, orchestra and art, keep kids busier and out of trouble. He aspires to make a difference in society and the lives of people through art education.

“I just want people to remember to become one and stop classism and racism. It’s something that would be difficult to change but I can try.”

Balancing the time to go to school and work two jobs and still find time to do art has proven to be a difficult task for Garcia, but he is inspired by his environment everywhere he goes, “It’s kind of like a second nature now, anywhere and everywhere you can think of.” Currently, he works for Domino’s pizza and teaches art classes at Michael’s art store on the eastside of El Paso. “You get droughts when you just can’t think or just don’t have time to paint or draw or sketch it gets pretty difficult sometimes,” explains Garcia as he works on a “Día de los Muertos” mask for an upcoming gallery opening. “You really have to try – you just can’t expect it to happen.”

Any part of the surroundings can be a potential spark of inspiration for Garcia, including the fellow art students he interacts with, music, the culture of El Paso, hardships and the way he was raised in comparison to his parents’ upbringing in Zacatecas, Mexico.

Garcia is an inspiring artist who has participated in local art events such as last year’s Chalk The Block and three Last Thursdays, an art event every last Thursday of the month featuring local artists.

Currently, he is preparing for an opening exhibition for a gallery presented by HeART of the Community where he will be featured along with other local artists. The opening exhibition “Primera Celebración (Día De Los Muertos)” will be held this coming November 1from 2-8 p.m. and November 2 from 12-6 p.m. at 3109 Alameda. The exhibition will be open throughout November.

“Art in the city has some support and I hope it grows more,” Garcia said. “Even by going and taking your friends you’re making a difference.”