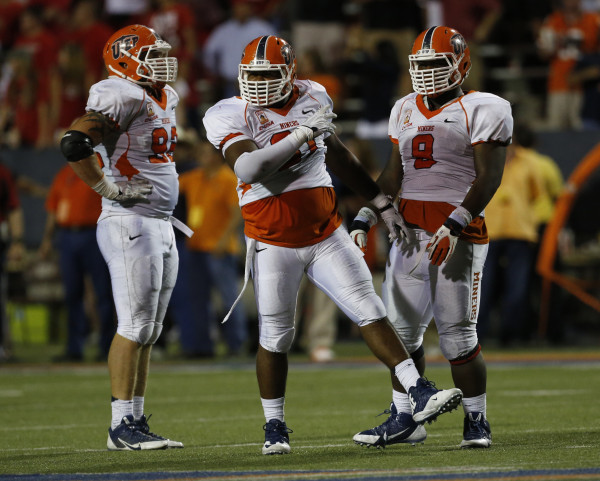 EL PASO – I look to the sideline at my position coach to get the call, a series of quick hand signals repeated three times.

“Over 4 Dagger Right Echo,” I yell out to my teammates so that we all can be on the same page.

Now, I look at the Tulane University lineup formation and recall what plays they run out of the 10 personal formations. The first number is for how many backs are in and the second number tells how many tight ends. In this formation the quarterback is usually aligned in shotgun with the back either to his left or right. I notify my teammates that the back is lined up away from me, meaning that most times the ball is run toward me, but to be aware that it is a passing formation.

I have my checks down and now it’s time to play. I put my hand in the dirt and focus on the ball and the man in front of me to key when to attack.

The ball is snapped and just as I predicted from the film study, the quarterback gives the ball to the running back and it’s heading my way. When the center snaps the ball I attack the offensive lineman with my body at low pad level. I use great footwork to beat my man to the punch and shoot both of my hands at the offensive lineman at his chest to gain control over him.

The adrenalin thrill of the game is what I love, but throwing my body into harm’s way has repercussions.

In my nine years of playing high school and college football, I’ve been cut, bruised, suffered strained muscles, had the ACL in my knees stretched, and endured sprains to my ankles, both elbows, both shoulders and my AC joint.

Players never leave a game without being injured and if you are hurt, your coach believes that playing through injuries make you tougher and a player they want on their team.

I’ve also had concussions on two separate occasions, once during practice and the second one during a game against Southern Methodist University in Dallas two years ago.

Most of the time I was unaware of my injuries while playing football because of the adrenalin rush. Fortunately, I never needed surgery and, although the second concussion was serious, after two weeks of treatment I was able to return to the field. According to national football rules, if I suffer a third concussion I’d have to resign from the game. Now I realize that any play could be my last one.

Even though I love the game of football with everything I have, it may not be the best long-term activity for me, but I have to make a smart decision about whether to continue.

I intend to try to make it to the NFL, but because of my size it’s going to be harder. But that never stopped me before.  I’ve never been a quitter in anything that I do because of the competitive drive that I carry. I jump through two offensive linemen to hit the quarterback at a game against Tulsa. (Ivan Pierre Aguirre, courtesy of UTEP Athletics)

The odds are stacked against me because of my size as a defensive lineman. Most NFL defensive linemen are 6 foot 3 inches tall to 6 foot 6 with an average weight of 300 to 340 pounds. I’m 6 foot one and 285 pounds so I do have obstacles to overcome.

People should know that when playing the game of football you learn to appreciate and understand things that you wouldn’t know if you didn’t play.

As a player you are taught to give back to community either helping with different projects or going to schools to talk to younger students.  My favorite is going to schools and talking to the kids about the lessons learned through the game of football, for example, overcoming adversity, getting back up when knocked down, work really hard to achieve your goals.

These disciplines are things that will help you in the real world outside of football.  The thing is people should understand that you will be an ex player as long as you are a player so, the lessons and experiences that come with it are a precious part of your life.