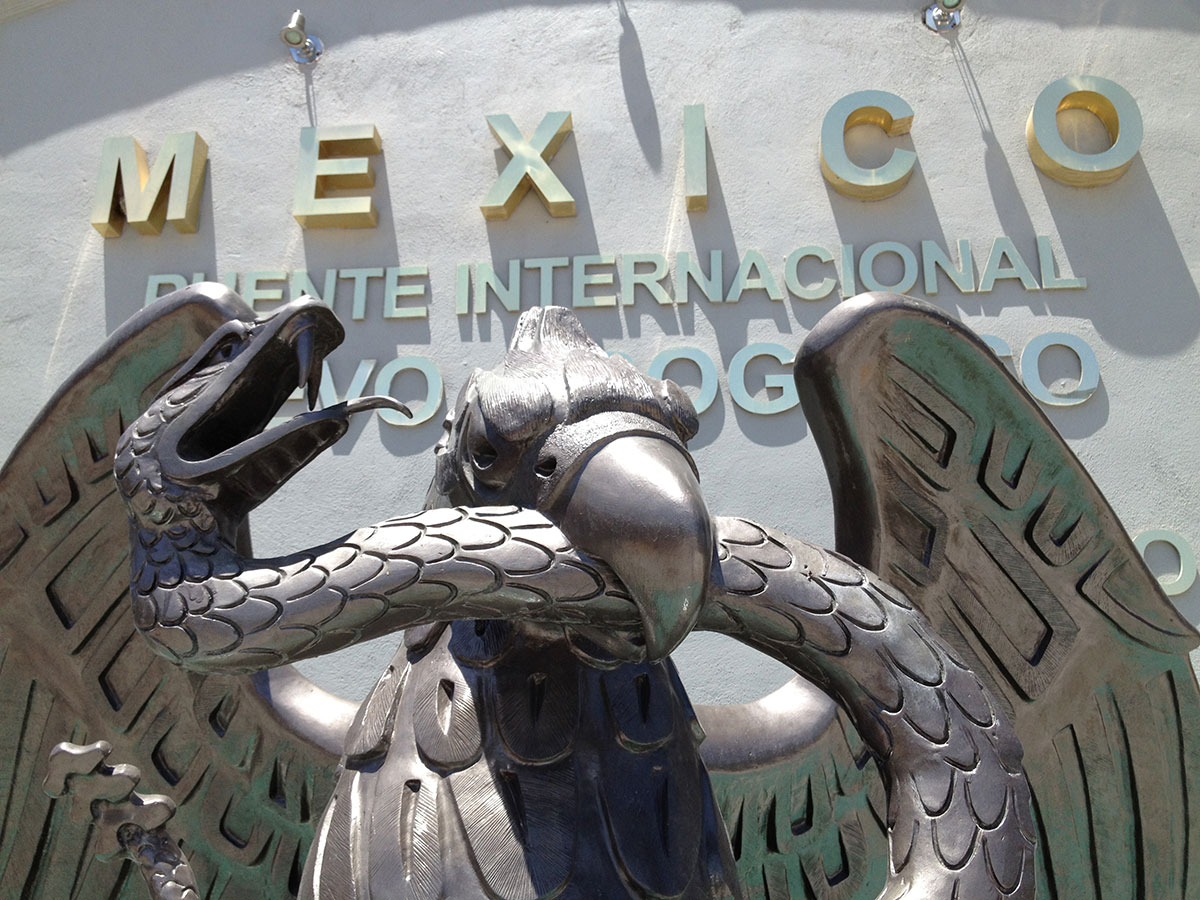 Our journey across the Texas border continued in Hidalgo County.

With close to 800,000 inhabitants, Hidalgo County is one of the most populous along the border and can be split up into three zones: northern, central and southern.

The northern zone is sparsely populated with vast ranches dotted by oil, gas well and even a chain of salt lakes.

Northern Hidalgo County is also a springboard for illegal immigrants from south of the border and through the unforgiving brush of South Texas.

The central zone, which is cut in half by the newly named Interstate 2, is densely populated.

Where one palm-tree lined city ends, the next one’s shopping centers begin.

These shopping centers are one of the Valley’s biggest economic generators with many customers coming from Mexico. Rich farmland for sugar cane, cabbage, onions and cotton are the only things between the rural communities of Relámpago and Río Rico.

The next stop on our trip across the U.S.-Mexico border was Progreso, Texas.

The town of 5,600 people recently made headlines for the bribery scandal arrest of its mayor, his school board president brother and their father.

Corruption weighs heavily on both sides of the border but Progreso is one of the last bastions of traditional tourism along the Rio Grande River.

Just south of Progreso is the peaceful border town of Progreso Lakes. The town of 248 residents was built along the Rio Grande and between two resacas, which are oxbow lakes formed in the ice age where a river once ran.

Nestled just north of the border wall, this community of large and beautiful homes and is one of the most crime free in the Valley.

Just down the street is the Progreso International Bridge, which links Texas to Tamaulipas.

The drug war has taken its toll on tourism but Nuevo Progreso’s shops, restaurants, dentists, doctors, optometrists and veterinarians continue to attract a fair number of U.S. visitors.

Visitors can eat at fine restaurants or buy “lonches” and tacos from street vendors guzzling them down with Mexican Coca-Colas, cold beer, margaritas or micheladas, a popular concoction of beer, lemon juice, ice and salt; call it a poor man’s margarita.

Tourists buy Mexican souvenirs from street vendors or casually browse through colorful and multi-story department stores. Many restaurants and bars offer live music where couples dance the afternoon away.

Although Nuevo Progreso was once a popular nightspot with crowded dancehalls, strip clubs and wild bars with mechanical bulls, most visitors now leave by the time the sun sets.

Half built buildings, closed bars and a closed casino in the town’s Southside are reminders that the drug war and its corruption are ever present in Mexico.

The next community along Military Highway is Runn, home to one of the oldest elementary schools in the Valley.

Next to the school runs the Alliance International Bridge, which is more commonly known at the Donna-Rio Bravo Bridge.

At a time when the border wall was being built (2008-2009, with the bridge opening in December 2013) the sister cities of Donna, Texas and Rio Bravo, Tamaulipas built a border crossing.

Donna, with a population of 16,200, is a farming town of carrots, cilantro, onions cabbage and sugar cane but is located eight miles away from the Rio Grande.

Rio Bravo, named after what Mexicans call the Rio Grande, is a town of 100,000 people located about seven miles south of the river.

Although the bridge was built to spur trade and development, it hasn’t arrived as quickly as many had hoped.

Both the neighboring City of Weslaco and Cameron County have expressed interest in buying Donna’s share.

The next few miles down Military Highway are filled with sugar cane fields and vegetable farms interrupted by the Santa Ana National Wildlife Refuge.

The wildlife refuge is home to the last sighting of wild jaguars, which once roamed Texas but were mercilessly hunted and exterminated.

The land on both sides of the refuge is also a well-known smuggling corridor for both illegal drugs and illegal immigrants.

But thousands of visitors flock to the refuge each year to see species of birds that are from Mexico but are found only in the Rio Grande Valley of the U.S.

Although the refuge is currently closed due to the federal government shutdown, it’s hoped that it will be reopened for the busy winter tourist season.

Just a few miles past the refuge is Pharr International Bridge, which was built in 1994. Downtown Pharr is located eight miles away from the bridge but the bridge was built to boost the city’s economy and it seems to have worked.

Although the bridge was built primarily for 18-wheeler and commercial traffic, a large number passenger cars and other traffic cross there to reach maquiladoras and the airport on Reynosa’s booming eastside.

Built in 1749 the City of Hidalgo is one of the Valley’s oldest as evidenced by the town’s historic center.

Along the banks of the Rio Grande River is the Old Pumphouse, which once pumped water from the Rio Grande to canals that crisscrossed thirsty farmland in the Valley.

The Old Pumphouse is now home to a park, a running trail and free movies on weekends.

The town of 11,200 people is also home to Norteño star Ramón Ayala, who holds annual festivals here every year.

Buses, vans and taxis take pedestrians from Mexico to the glistening and immaculate shopping centers of McAllen just a few miles north.

With nearly 750,000 people, the sprawling City of Reynosa is the largest in the State of Tamaulipas. Sadly, the war between the Gulf Cartel and their former enforcers, the Zetas, tore the city apart in 2010.

Residents turned to the social media network Twitter to report the violence, which was not being reported in the local media and underreported by the government.

American tourism has almost disappeared in Reynosa with many businesses and nightclubs in the downtown area now closed.

But the spirit of the people of Reynosa cannot be defeated.

Public works projects include a new highway loop, a soccer stadium and even wind farms to generate green energy.

Although Lupita and I have been to Reynosa several times, this time we bypassed the teeming city to continue along Military Highway heading west.

Our trip took us through the McAllen Free Zone where maquiladoras have been built on a smaller scale than those in Mexico.

Immaculate factories with ample parking are well landscaped with palm trees, fountains and manmade lakes. The area was created shortly after the signing of the North American Free Trade Agreement, or NAFTA in December 1992.

That hasn’t happened yet but just around the corner from the free trade zone is Granjeño, one of the Valley’s oldest and smallest cities.

Founded in 1767, Granjeño was one of the communities that most strongly rallied against the border wall. The federal government seized land which had been in families for generations. They preferred more patrols and not an obstructive fence.

The wall was erected based on a compromise, which built a “levee-fence” to control flooding, which was problematic in the area.

One of the most interesting spots in Granjeño is Crazy Joe’s Bar, which sits in the shadow of the Anzalduas International Bridge.

Built in 2009, the Anzalduas International Bridge is the newest border crossing in the Rio Grande Valley.

The bridge was built to allow tourists from the wealthy city of Monterrey, Nuevo Leon to bypass traffic in Reynosa and have quicker access to the Valley’s shopping centers.

The strategy has worked with Texas officials turning FM 396 into a non-stop highway in order to make the trip from the bridge to Interstate 2 much quicker.

Just down Military Highway from the bridge are sugar cane fields and orchards. The famed Ruby Red Grapefruit was first cultivated in mass in Mission.

Orchards surrounding Mission are the heart of the Valley’s citrus industry, which ships grapefruit and oranges to meet the demand up north.

But along the border highway is Anzalduas Park, Texas built next to a small dam along the Rio Grande River.

Americans stay on their side but across the river in Reynosa crowds gather on the weekend and others rent jet skis or take tour boats from Boca Toma and the La Playita amusement park.

After Anzalduas Park is the Juan Diego Academy and the historic Saint Peter’s Novitiate at La Lomita Ranch. The historic church burned down in 2009 but the La Lomita Chapel, which was built in 1865, remains standing along the banks of the Rio Grande River.

Residents used to swarm to the Pepe’s On The River Bar along the Rio Grande until Hurricane Alex ended the party in 2010. But the neighboring Riverside Club still offers live music, dancing, food and drinks to visitors.

Next to the club is the Chimney Park RV Resort, a small community along the Rio Grande that is home to retirees and Winter Texans.
The smokestack at Chimney Park is the only remnant of an old pump house that moved water from the river to the Valley’s vast canal network.

Just down Military Highway from Chimney Park is the National Butterfly Center, a park and education center, built along one North America’s major migratory butterfly routes.

After the National Butterfly Center, is Bentsen-Rio Grande Valley State Park, one of the most popular in the Lone Star State.

The park is named after the family of Lloyd Bentsen, a Mission native who served for several terms as a U.S. Senator and even ran for Vice President with Michael Dukakis in 1988.

Next week La Joya, and other small towns, of Hidalgo County.