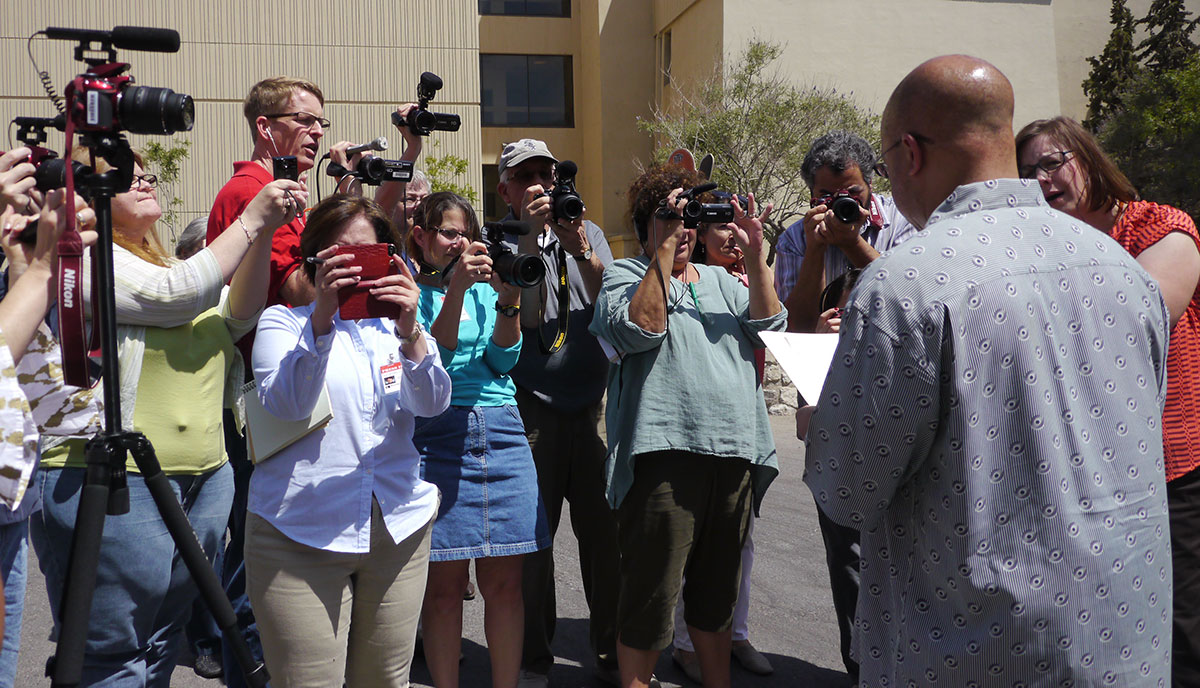 Independent, citizen, and blog dwelling journalists of today could lose protection because of the Free Flow of Information Act 2013. (©Borderzine.com)

EL PASO – Recently Senator Dianne Goldman Berman Feinstein (D-CA), a well-known career politician, thought it would be appropriate to apply new definitions to what is required to practice journalism in America. She did this in her amendments to the Free Flow of Information Act 2013 (FFIA), which consists of the shield laws journalists would use to protect their sources. The proposed law passed through the Senate judiciary committee on September 12. Independent, citizen, and blog dwelling journalists –and theirs sources– could lose protection because of the Free Flow of Information Act 2013. (©Borderzine.com)

Feinstein has always found herself on the opposing side of issues regarding freedom. Voting to extend the feared Foreign Intelligence Surveillance Act (FISA) and the loathed Patriot Act. She co-sponsored the Protect IP Act (PIPA), another hot topic issue regarding Internet piracy. In 1994 she introduced the Federal Assault Weapon Ban and introduced a similar bill regarding firearms in 2013. Most recently she has taken to redefining words.

The amendment was slipped into Senator Charles Schumer’s (D-NY) bill known as S. 987 or FFIA. Although the bill still protects journalist and their sources; it only protects a certain class of journalist. Now in order to be considered a journalist one “obtains the information sought while working as a salaried employee of, or independent contractor for, an entity.” This verifies to the government that the person is indeed a real journalist.

What that means is that in order to be considered a journalist by the law one must be consistently in the employment of a news agency. This removes the protections from the non-aligned journalists who represent the new brave frontier of digital journalism.

In the past, media dominance was driven by access to the format and resources needed, which has traditionally been limited. Now in this age we have the Internet, which limits the amount of resources required to transmit a message to the most minimal in history. That means that the independent, citizen, and blog dwelling journalists of today can bypass the traditional means and requirements of spreading news.

These new journalists represent something entirely new and different in the media jungle.  They are essentially modern-day literary Ronin beholden to no master. What’s even more amazing is that it is non inclusive; anyone is capable of uploading a video to Youtube or Liveleak and one can start up a blog on any number of websites. Most importantly, that anyone can be you.

This kind of journalistic activity could be dangerous to any government prone to corrupt actions. That is why it is jeopardous that the pool of journalists becomes limited by government mandate. Many of biggest names in journalism today, at least the mainstream, lack the required educational credentials to be a journalist. Many college dropouts and non-journalism degrees dominate today’s media market, yet we willingly accept them as journalists. If America can cut a break for these people it can certainly open up to the idea that some journalist don’t require brand name recognition to propagate their material.

This wouldn’t be the first time that the government has attempted to interfere with the journalistic community. The CIA attempted to influence the media in the 1950’s during Operation Mockingbird. With the recent lift on the propaganda ban it appears the same fetid tide is rising upon the shores of liberty once more.

Throughout history the world was ruled by ideas backed by actions. However in the last century that pattern changed. Now ideas can and are applied with such force by the modern media system that active coercion is no longer required to enact dramatic change in societies.

The cornerstone of a free society is the journalist. They are entrusted with one simple cause, the truth. While the truth may be baneful to some unsavory types, it is the basis for running a healthy society. That is why it is abhorrent to allow arbitrary definitions to dictate who is allowed to disseminate the truth.

One thought on “I am not Feinstein with this”