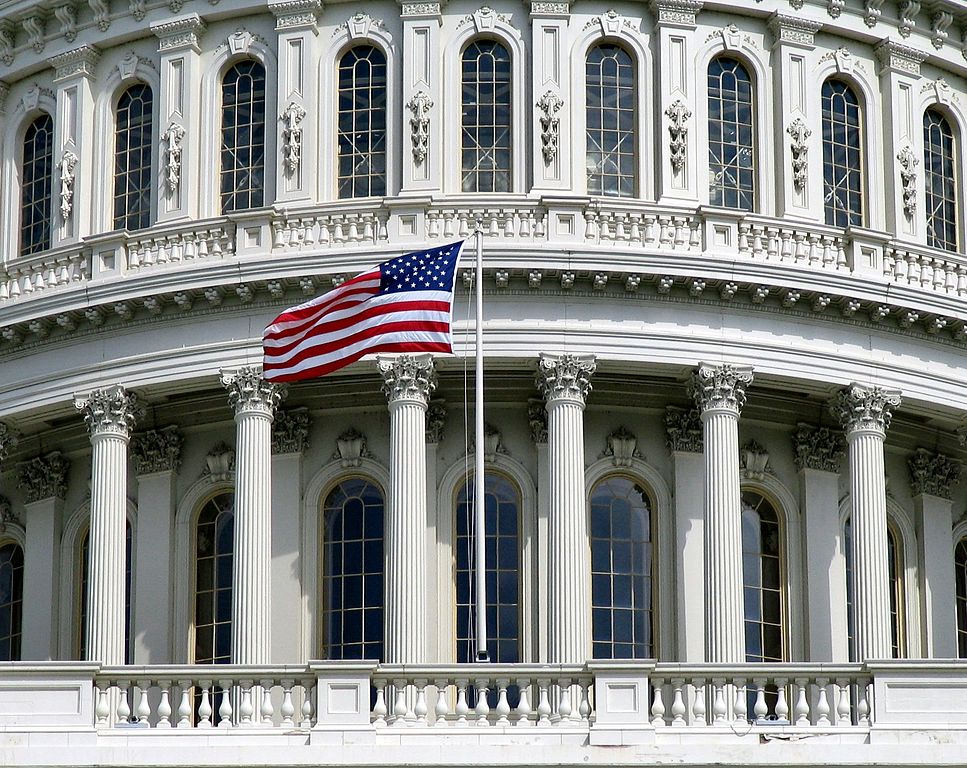 An eleventh hour vote accepting a short-tem agreement ending the government shutdown and raising the debt ceiling finally passed both houses of Congress after a 16-day impasse. (©Bobt54)

LAS CRUCES, NM – The current political extremism in Washington, D.C., reminded me of Yeats’ poem The Second Coming, especially the lines “The best lack all conviction, while the worst/ Are full of passionate intensity.”

Our founders could not have foreseen a time when a small group of right-wing diehards in the U.S. House of Representatives could shut down the government and threaten to damage the American economy because they lost the fight to wreck the hard-fought Affordable Care Act. An eleventh hour vote accepting a short-term agreement ending the government shutdown and raising the debt ceiling finally passed both houses of Congress after a 16-day impasse. (©Bobt54)

They started this skirmish under the Capitol dome to kill the health-care law after more that 40 previous failed attempts to damage the law, which was enacted by Congress, signed by the president and upheld by the Supreme Court.  They even ran against it in the last presidential election and lost.

An eleventh hour vote accepting a short-term agreement ending the government shutdown and raising the debt ceiling finally passed both houses of Congress after a 16-day impasse, but the measure is only temporary. You might as well get used to this political trench warfare, because like zombies, the extremists never stay underground for long. They will continue lunging at Obamacare forever in the same way the right wing has never stopped attacking Social Security.

Remember when George W. Bush tried to privatize Social Security enacted half a century earlier right before the Great Recession crippled financial markets and sliced off half the value of the retirement nest eggs of most middle class Americans?

After Hispanics helped swing the last presidential election over to Democrats, mainstream Republicans realized that their party suffers from a stagnant constituency, while the numbers of minorities, especially Hispanics, continue to grow because of high birth rates and immigration.

We began to see the traditional Republicans start to draft immigration reform legislation and ponder over new ways to attract Hispanics. I see little hope for immigration reform or sensible legislation of any kind now that the Tea Party wing of the House of Representatives has risen from Spiritus Mundi to grip in a chokehold

the very government it swore to protect while wagging a sullen U.S. Congress to hell and back.

How does a minority – some 40 Tea Party Republicans out of 435 Representatives – wag the rest of Congress and the nation by closing the U.S. government and threatening the credit worthiness of the United States of America?

Rules put in place over time by majorities in the Congress and simply by tradition now rule the day. In the Senate the use of the filibuster calls for a super-majority of 60 votes to limit debate allowing legislation to proceed to a vote. In the House, the so-called Hastert rule requires a “majority of the majority” to bring proposed legislation to the floor for a vote. Filibustering is a senatorial privilege and the Hastert rule is a custom started in the mid-90s by then speaker of the house Dennis Hastert to protect his own position.

Speaker John Boehner could easily have ended the impasse two weeks ago but he was afraid to violate the Hastert rule, a move that threatened his position.  Remember that the Speaker is the third politician in the presidential line of succession. Ultimately he had to do it and the right-wing driven assault on the national honor came to a temporary halt.

Time-tested gerrymandering of voting districts in states such as Texas now dominated by Republicans allows GOP representatives to vote with little regard for any electoral opposition with one important exception – they are wary of a primary challenge from the more extreme right wingers if they veer from conservative commandments on taxes, abortion, guns, immigration and the environment.

And even in states where the federal economic footprint is large, they preach the old racist rant of state’s rights and champion the idea of the self-made man battling a spendthrift welfare-driven intrusive central government.

So for now, the gerrymandered red corners of the country carry a lot of weight in the U.S. Congress. And now that the current impasse over the U.S. debt limit and the Affordable Care Act is over, the right-wingers will regroup, much to the dismay of mainline Republicans, for the next budget battle and most likely will combat any attempt at immigration reform.

I find it amazing that any middle class or working class Americans would vote against their own best interests by sending politicians to Washington who oppose laws enacted in their benefit, usually the social safety nets like Social Security, Medicare, Medicaid and now the Affordable Care Act.

But I understand why they do it. The politicians cloud the protections that government provides behind a smoke screen of social issues that are tied to particular religious beliefs and old prejudices such as homophobia and abortion rights and even virtually universal practices such as contraception. They are not afraid of the obvious absurdity that forbidding contraception can lead to abortions.

Ironically, on these issues they are more Catholic than the Pope who recently said that the Roman Catholic Church had become “obsessed” with gays, abortion and contraception at the cost of fulfilling its basic mandate to be the “home for all.”

So they’ll be back undaunted to battle again like a sequel to Night of the Living Dead. Someday they won’t be able to gerrymander effectively any more because they will simply run out of room as the minorities they fear so much edge into the majority. Perhaps then the U.S. Capitol will again be an American home for all.