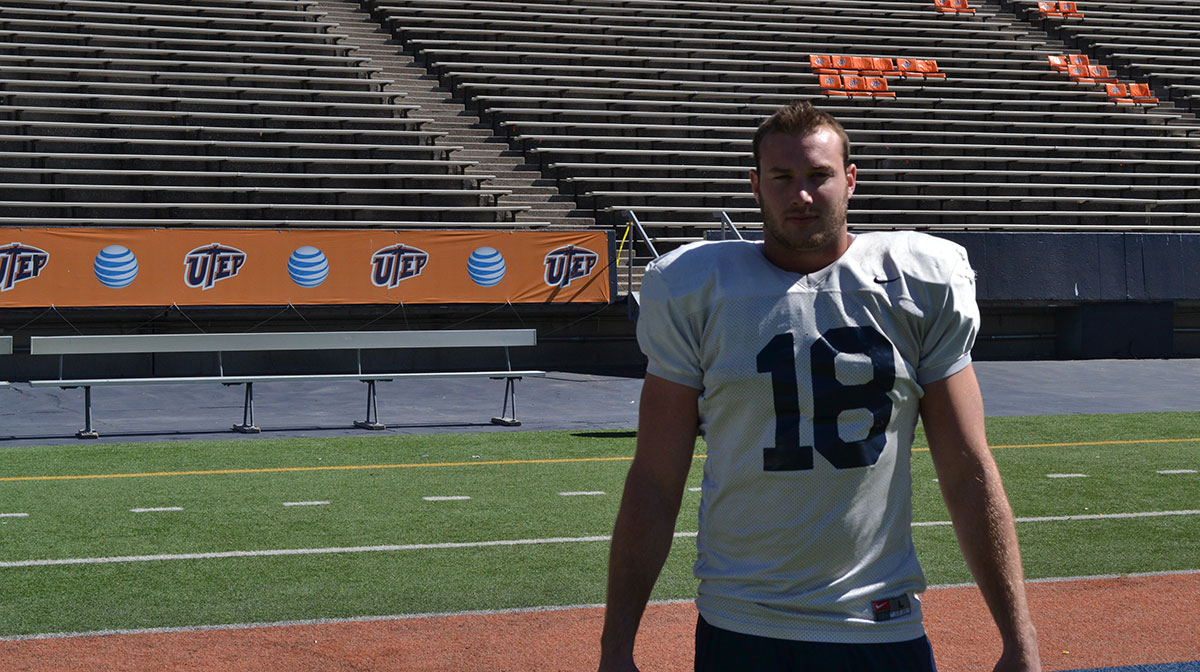 EL PASO – James Davidson started playing football and Tae Kwon Do when he was eight years old but his parents always told him that school was more important than anything else.

Entering his senior year with a major in criminal justice at the University of Texas at El Paso, Davidson, 23, has an important decision ahead of him – what to do after he walks across the graduation stage.

Davidson who is 6’3 and 235 pounds plays defensive end for the UTEP  Miners and is a three-time champ in Tae Kwon Do. He has played every position on defense, starting at safety, linebacker, to defensive end and he even played on special teams returning some kicks and punts.

He was regarded as one of the top 20 defensive backs in high school in Huntsville, Texas, and according to Scout, a sports ranking website, he was the No.128 high school safety in the nation. He was also an honorable mention selection on defense in the 2008 Associated Press 4A All-State team.

He started as a linebacker at UTEP, but a year later he was moved to defensive end. According to his former defensive coordinator, Andre Patterson, “Davidson has a lot of skill sets that can take him to the next level as long as he continues to use them since he’s a smaller guy at his position.” He has improved every year in the stat category earning him a big name on UTEP’s defense, which is watched by NFL scouts. He is very fast and quick off of the football with great hand-eye coordination and a relentless and willing attitude.

Davidson attributes many of these skills to his training in Tae Kwon Do, a form of martial arts specializing in the technique of unarmed combat for self defense in which the skills and techniques included are punching, blocks, dodges, jumping kicks

His football skills benefitted from the Tae Kwon Do parrying actions with hands and feet that involve very little contact if any and from ways of thinking while engaging in sudden movements. Tae Kwon Do requires strict discipline and he has been doing this for as long as he has been in football.

The movements and the training that he uses in Tae Kwon Do helps him gain an edge against his opponents and set him apart from his teammates. The discipline he learned in martial arts has improved Davidson’s ability to focus in the college classroom where he has achieved a 3.5 academic average.

As far as the future is concerned, Davidson is majoring in criminal justice and says he wants to be an FBI agent.  “Hopefully it has something to do with action,” he said.

He loves action, but his family has always emphasized that school is the most important activity in his life. “My mom and dad have instilled in me that education is the key to everything and getting my degree is most important because that’s something that can’t be taken away from me,” he said.

Davidson has been managing the two sports and school and he is coming close to deciding what he wants to do for a career. “I don’t know what I’m going to do when I finish. I mean to get my degree first then if the NFL comes calling then hey I’ll give it a shot but Tae Kwon Do would be another option,” he said.

“I didn’t go to school for nothing. I mean if football and Tae Kwon Do don’t work out I’m definitely going to apply to the FBI, plus I can always tackle, kick and punch guys in there but now it’s for a nice pay check with less bumps and bruises,” he chuckled.