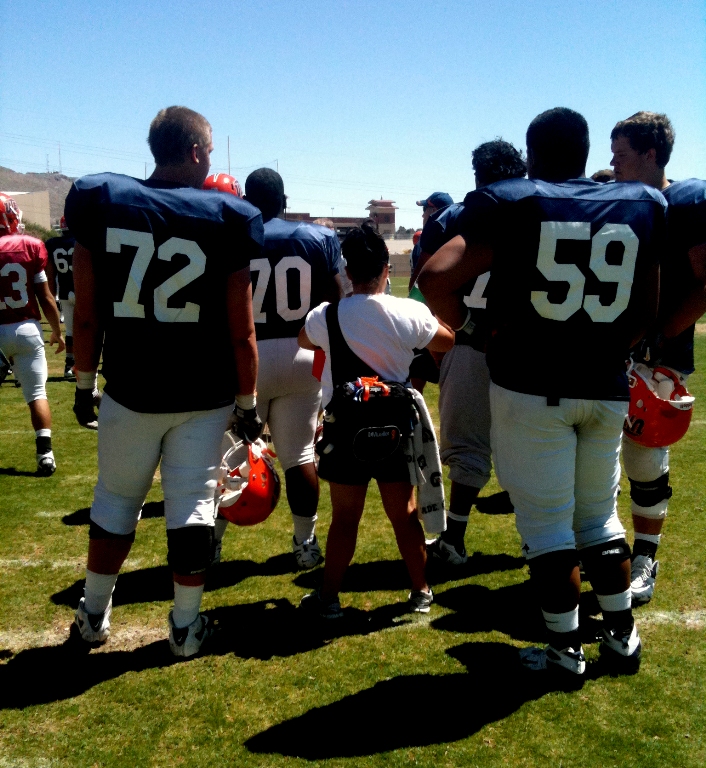 EL PASO – I stand on the sidelines of an XXL world filled with, size-17 shoes, and giants battling for a pigskin ball in a field of blood, sweat, ice and medical tape, one of a few women allowed in the center of the turmoil.

There are very few women involved in the male maelstrom, whether it is college football or in the NFL. Having a passion for the game and also being involved in the media aspect, I have seen that women are undervalued in the world of men’s sports. “Have you ever noticed those female sideline reporters the networks employed for NFL games? And have you ever noticed they’re all a bunch of ignorant bimbos that wouldn’t know a football field from a cornfield without a man pointing them in the right direction ” said comedian Norm McDonald while imitating Andy Rooney.

Most viewers are told that women sports reporters are not as good or as knowledgeable as male reporters. Take for example the scandal around the sexy woman reporter who complained about sexual harassment in the locker rooms. This creates stereotypes that we have to overcome when starting a career. I know I would be able to tell the difference between a roaring stadium and a cricket-filled cornfield blind folded.

“I do think through the years women were judged more harshly,” ESPN Anchor/Reporter Suzy Kolber said about her experience as a sports reporter in an article titled Women in Sports Media- How to Thrive in an Industry Despite Society Doubting Your Credentials by Pamela Modarelli Hegner. Women in sports media world have a bit of a different viewpoint, however,  than those of us who work with the teams.  We become involved at a different level. Seeing the stresses and hard work behind every win or loss makes you see players and coaches in a different way.

Working within the sport has its perks and its downfalls.

Weighing 108 pounds and standing tall at 5 feet, nothing in the football equipment room is going to fit me. It is not stocked in x-smalls. Most women here wear shirts and pants that hang to the floor and it is rare to get any type of sports equipment or gear in the correct size.  Being banned from  areas such as the locker rooms also complicates my job, but the sagging baggy uniforms are my main complaint.

The perks that make me love what I do are watching hard work pay off from the best seat on the field during games, feeling what the players experience and joining in on team activities such as trips and community events.

Being a part of this world is rewarding when you are able to get past the stereotypes. Women are proving themselves to be just as hard working and knowledgeable as any man within this pigskin world. With strong role models such as USA TODAY reporter Christine Brennan, who writes about national and international sports, we will continue to flourish in the mostly male world. For now, we just have to pull up our baggy pants and pave the way for more women.