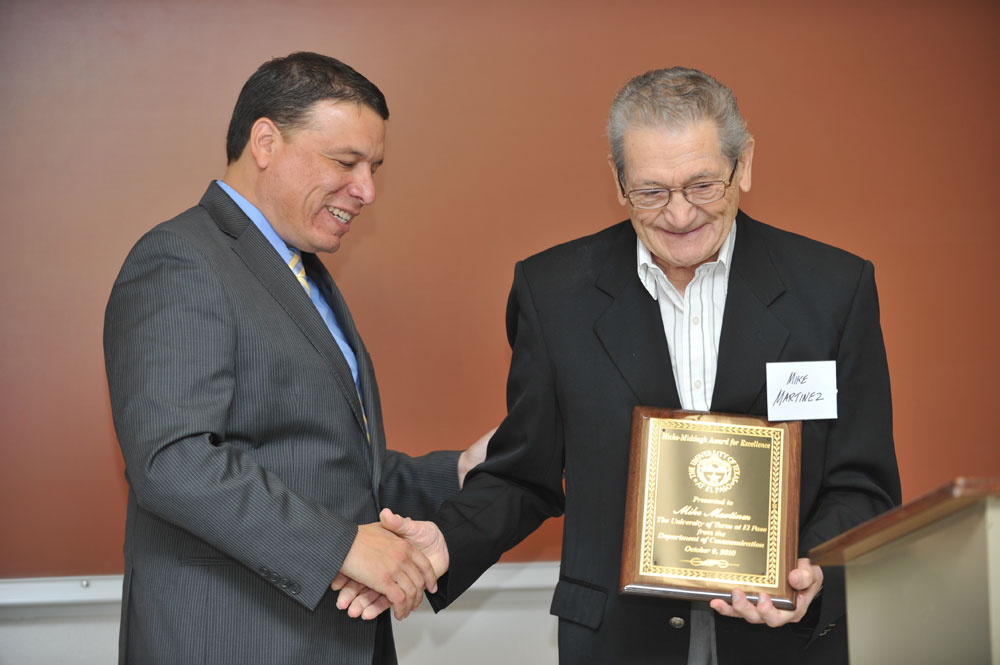 Mike Martinez receives the 2010 Hicks-Middagh Award for Outstanding Alumni in the field of Communication from Dr. Frank Pérez. (Brian Kanof/Courtesy of the UTEP Dept. of Communication)

EL PASO— After five years as chair of UTEP’s Department of Communication, Dr. Frank G. Pérez decided to step down from the administrative position to invest more time in ongoing research projects and in the classroom.

“I think it’s time I let someone else have a shot at running the department,” Pérez said. Dr. Stacey K. Sowards, associate professor of communication, will become the new chair as of August 31, 2013.

Pérez, a self- described Chicano born and raised in El Paso, explains that he never really thought of pursuing a career in administration. His goal always has been to be a college professor and focus on research. Dr. Frank Pérez greets Mike Martinez, recipient of the 2010 Hicks-Middagh Award for Outstanding Alumni in the field of Communication. (Brian Kanof/Courtesy of the UTEP Dept. of Communication)

A first-generation college graduate, Pérez brings a different flare to the classroom – an academic knowledge of communication with a personal awareness of the needs of his community and of the   daily struggles of his students.

“Being a first generation it’s a very special and a very bitter sweet experience because I really think you get to live your life in two different worlds,” Pérez said. “Navigating in those lives can be difficult if you don’t have anyone to guide you.”

After teaching in the department for seven years, the opportunity to become the new chair was offered to him in the fall of 2008. Pérez explained that he felt confident about trying out his luck as Dr. Pat Witherspoon’s successor.

Witherspoon, current dean of The College of Liberal Arts, said although she knew that following a chair that had been in the position for eight years was not going to be easy, Pérez’ ties to El Paso and UTEP made him the perfect candidate.

Pérez graduated from UTEP in 1997 with a master’s degree in communication and continued his education at The University of New Mexico at Albuquerque, where he received his PhD in intercultural communication in 2001.

Pérez was the first professor Witherspoon hired as chair of the department. She remembers seeking him out immediately after he finished his PhD program to bring him back to UTEP. He accepted and returned to his hometown in 2001 as tenure-track assistant professor to later become associate professor in 2007.

His commitment to the department and connection with the students were apparent for Witherspoon, who knew he was ready to take the next step in 2008 and become her successor.

“I think the students had an advantage having him chair, because he was from here. He understood the students from minute one. He had been a very popular and very successful teacher,” Witherspoon said. “He had a lot of credibility when he came in.”

Pérez’ role in the Department of Communication has enforced key aspects of the community such as bilingualism, intercultural communication and border issues, Sowards explained.

In addition to continuing to enforce these ideas, Sowards hopes to increase the development of PhD programs, grants, and research projects as new chair.

When the faculty selected Sowards for the position, Witherspoon said she knew they had made the right decision. She explained that Sowards experience and ideas for growth are just what The Deparment of Communication needs to continue moving forward.

The decision to become the new chair felt natural for Sowards, who after 11 years of teaching at UTEP, felt it was time to take on a new challenge.

“It’s not about yourself and your leadership role, but it is about the kind of service that you provide for students and faculty within the department,” Sowards said.

Sowards received her PhD in communication studies from The University of Kansas in 2001. During her time at UTEP she has led a study abroad program in Germany and several research projects to México, Costa Rica and Indonesia focusing on ecotourism, environmental organizations and conservation.

Pérez said he is confident that Sowards is ready to lead and represent the department. He believes her involvement and leadership in the field of communication and as a professor at UTEP will bring great benefits.

Pérez said that being the face of the department for five years has been a humbling experience that taught him a different side of academia. He said he is happy to now be able devote more time to teaching at the university and to do research for two pending book projects.

“The legacy of Dr. Pérez is that he was one of these students who has become a role model and a mentor to students who want to go on and get a PhD, perhaps come back and be a faculty member,” Witherspoon said. “He is a pioneer in that regard.”