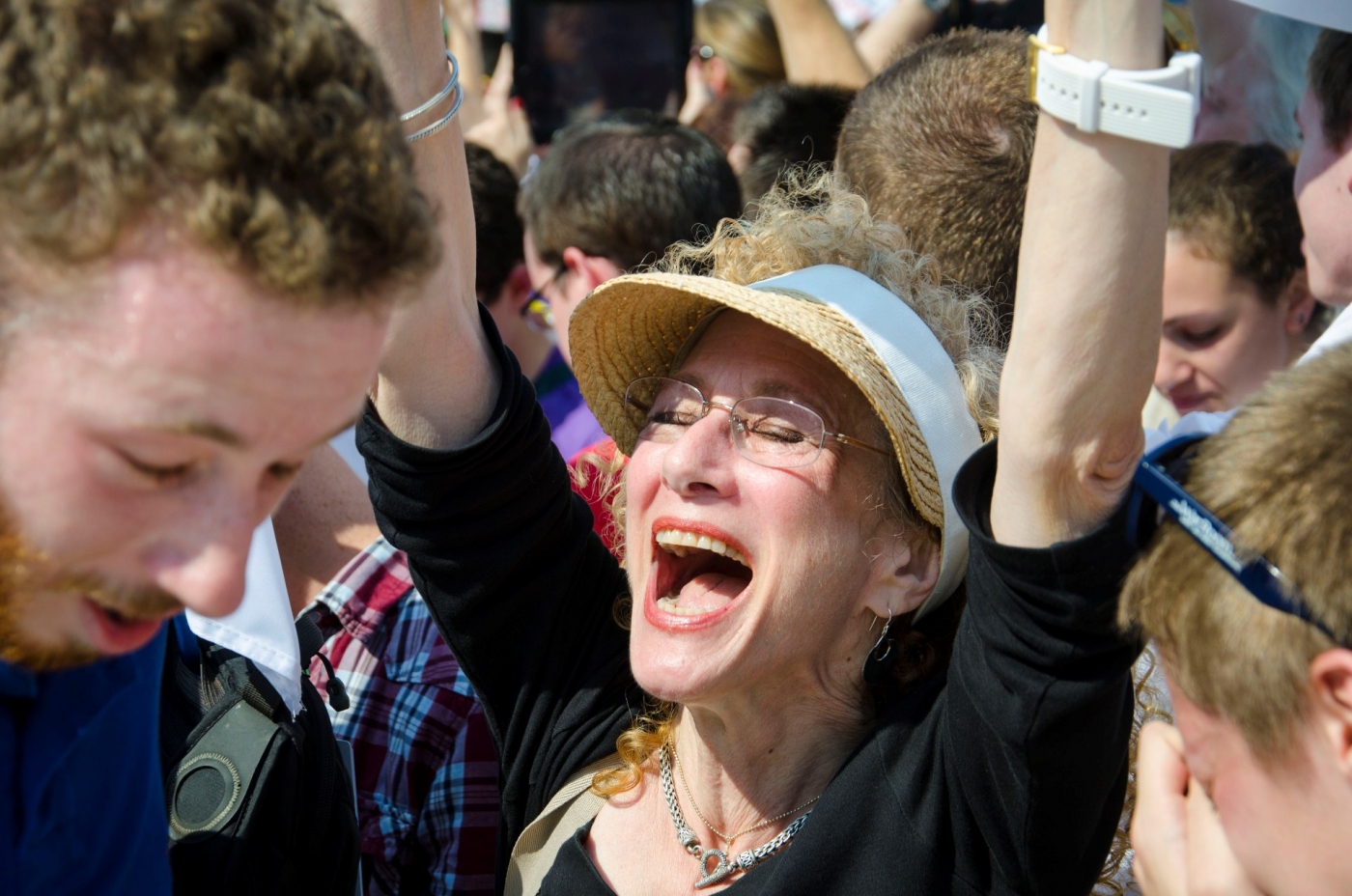 Sharon Solomon, 60, of Los Angeles, cheers outside the Supreme Court on Wednesday as word traveled of the justice's ruling that the Defense of Marriage Act is unconstitutional. "I'm jubilant," she said. "This is the beginning of the next step of a continuing journey." SHFWire photo by Deanna Del Ciello

Sharon Solomon, 60, of Los Angeles, cheers outside the Supreme Court on Wednesday as word traveled of the justice's ruling that the Defense of Marriage Act is unconstitutional. "I'm jubilant," she said. "This is the beginning of the next step of a continuing journey." (Deanna Del Ciello/SHFWire)

WASHINGTON – The Supreme Court handed supporters of gay marriage a pair of victories Wednesday on the final day of its term.

The Supreme Court ruled that the federal Defense of Marriage Act is unconstitutional and determined that it could not rule on California’s Proposition 8. Both decisions were 5-4.

DOMA, enacted in 1996, defines marriage as between one man and one woman. The act affected about 1,000 federal benefits.

In the opinion, Kennedy wrote that the federal government hurt a group of people that the states were trying to protect.

“What the state of New York treats as alike the federal deems unlike by a law designed to injure the same class the state seeks to protect,” Kennedy wrote.

By doing this the government violates basic due process and equal protection principles, Kennedy wrote.

When he read his dissent, Scalia said it was difficult to pin down majority’s basis for unconstitutionality.

In his opinion, he wrote that the majority of the court said supporters of DOMA acted with malice – to injure same sex couples.

“It is hard to admit that one’s political opponents are not monsters, especially in a struggle like this one, and the challenge in the end proves more than today’s court can handle,” Scalia wrote. “Too bad.”

In Hollingsworth v. Perry, the California case, Roberts read the court’s opinion, which said the Supreme Court did not have the authority to decide the case.

In 2008, California voters passed Proposition 8, which defined marriage as between one man and one woman. The state declined to defend the proposition in court, so proponents of the proposition took the state’s place.

For the court to hear the case, the party involved must have standing, which requires that it must show it suffered an injury, Robert’s opinion said.

“For a federal court to have authority under the Constitution to settle a dispute, the party before it must seek a remedy for personal and tangible harm,” Roberts wrote.

As a result, the Supreme Court could not determine the main question of the case: whether the 14th Amendment, through its Equal Protection Clause, prohibits California from defining marriage as between one man and one woman.

“We have never before upheld the standing of a private party to defend the constitutionality of a state statute when state officials have chosen not to,” Roberts wrote. “We decline to do so for the first time here.”

“The laws of our land are catching up to the fundamental truth that millions of Americans hold in our hearts: when all Americans are treated as equal, no matter who they are or whom they love, we are all more free,” he said.

On the steps of the Supreme Court, the Rev. Rob Schenck, chairman of the Evangelical Church Alliance, gave a brief speech and led a prayer after the decisions were announced.

“One thing certain about today’s Supreme Court opinions is that they do not change the biblical definition of marriage as between male and female,” he said.

During a press conference, also on the court steps, Chad Griffin, president of the Human Rights Campaign, set a new goal for supporters of same sex marriage: marriage equality for all 50 states in five years, the same amount of time it took to address Proposition 8.

“Tomorrow is certainly a new day, but the sun will still rise on an unequal country,” he said.

Christine Scalora is a news-editorial journalism major at the University of Nebraska-Lincoln. She will graduate in December. In college, Scalora’s first journalism experience was covering the 2010 Special Olympics USA National Games, where she produced stories about athletes, fans and volunteers. She also worked for the university’s Office of Undergraduate Studies, where she wrote about undergraduate research projects and students who won nationally competitive scholarships. After a semester at the Daily Nebraskan as a reporter, Scalora reported for the Nebraska News Service. The news service is the College of Journalism and Mass Communication’s student-run wire service covering the Nebraska Legislature. She was the only reporter during the semester, so she had the opportunity to cover a variety of issues during the session. Scalora also interviewed all of the candidates in Nebraska’s 2012 Senate race. Last summer, she had a Dow Jones News Fund copy editing internship at The Daily Journal, Kankakee, Ill. In the fall, Scalora was a reporting fellow at the Omaha World-Herald. Scalora is a member of UNL’s chapter of the American Copy Editors Society and has studied at the University of Oxford.