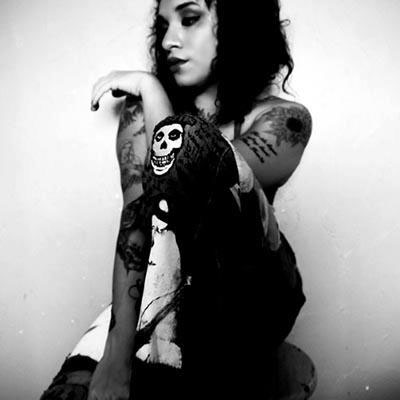 Marcy, 28, is local photographer, artist and writer. (Courtesy of Marcy)

EL PASO— Jenna Talackova, a 32-year-old Canadian model and television personality, was one of Miss Universe Canada 2012’s finalists, but she was disqualified from the competition when it was discovered that the beautiful blonde was born a boy.

The contest organizers said that contestants must be ‘naturally born females’ and since Talackova had undergone surgery to become a woman, she could not compete. Marcy, 28, is local photographer, artist and writer. (Courtesy of Marcy)

This is an example of the problems that transgender individuals face throughout their lives. These individuals also endure discrimination and harassment at school and in the workplace.

Marcy, a 28-year-old woman who says she just happened to be born into a male body, realized from a very young age that she did not relate to the male gender.

“I’ve always been a feminine soul and for the longest time even from childhood I never identified with one gender or the other. I mean, I’m just Marcy,” she said. Marcy believes that “being a woman is a state of mind and a state of being” and does not have to do with sex.

Transgender people often feel like they are trapped in someone else’s body — either a female trapped in a man’s body or vice versa.  In her article Transgender people are born that way, Brianna Austin, co-author of I’d do it again poses the question that if being transgender is a biological trait, like having blue eyes or curly hair, then why should it be held against them.

“Many Americans have a profound lack of understanding of what it means to be transgender. Consequently, transgender people commonly face a wide variety of discriminatory barriers to full equality.  Transgender people sometimes face difficulties meeting their basic needs (getting a job, housing, or health care) or in having their gender identity respected (like in the simple act of going to a public restroom),” states the American Civil Liberties Union (ACLU) in their website.

According to the American Psychological Association, Transgender is an umbrella term for persons whose gender identity, gender expression or behavior does not conform to that typically associated with the sex into which they were born. Transgender is by definition an identity opposite the sex you were assigned at birth.

Marcy says that she feels most accepted at rave events where a diverse group of people comes together through music and dance. “Even though everyone is so different they make everyone feel like they are all the same,” she said and explained that this is something that she longed for.

Marcy said that having become part of the rave scene was the best way she could have coped with years of depression. She felt that that was one place where she was accepted exactly as she was and liked for who she was. "The Ape of the Pearl Earring" by Marcy. (Courtesy of Marcy)

“I feel like I’m forever indebted to the rave scene. The rave scene saved my life!” she said.  “I used to be a really dead person before. I was very depressed and when I went to a rave I felt like I was home. I became alive, like I was born there for the first time. I felt like this is where I need to be.”

Much progress has been made recently. As of November 7, 2012, gay marriage has been legalized in nine states and the District of Columbia. This is a huge accomplishment for the lesbian, gay, bisexual and transgender community, or LGBT, and it seems that progress continues to happen everyday.

Marcy too, believes that things have gotten better for the LGBT community within society. “I feel that people are a lot more open-minded now,” she said. “These days people will approach me as the gender that I associate myself with.”

At the end of the day, Marcy just wants the success and happiness all people long for.  “I do everything a normal girl does,” she said. “I’m just living.”