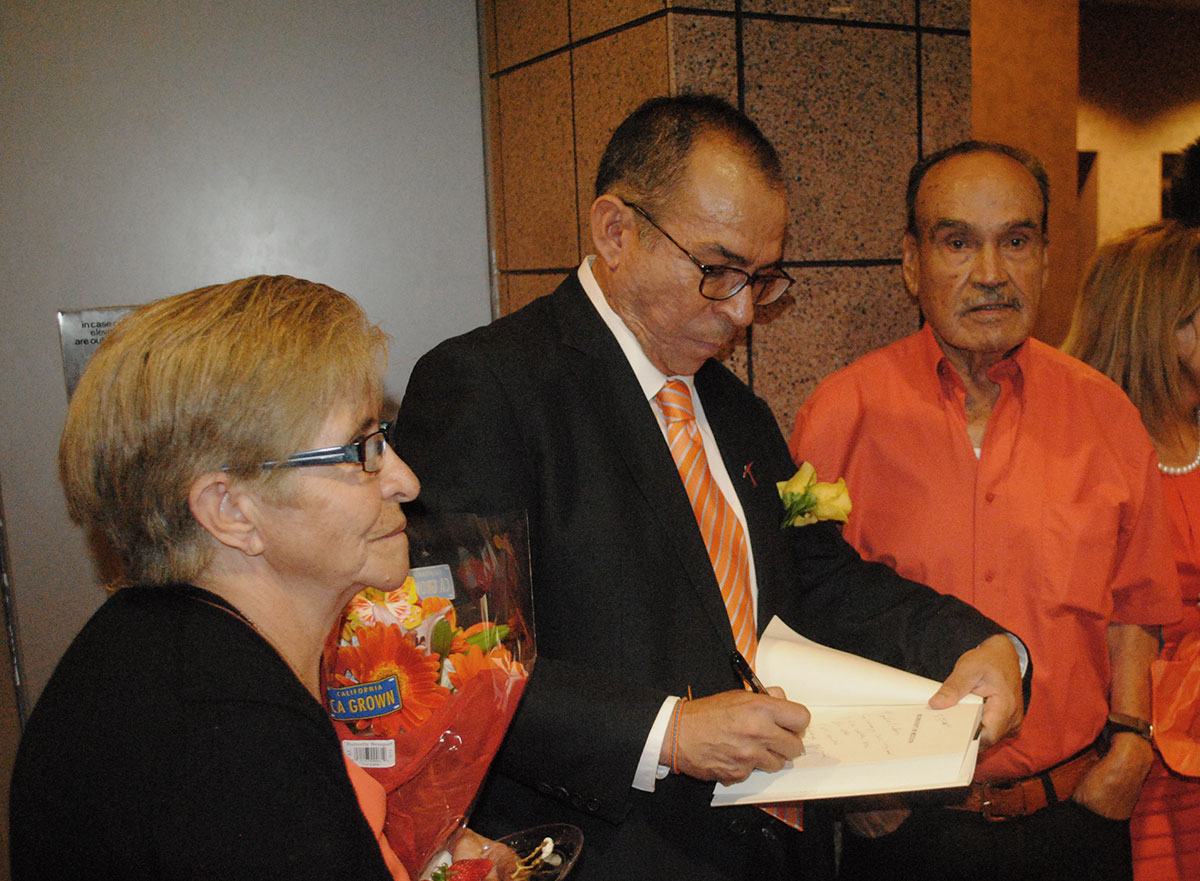 EL PASO – “July, 2007 was the last time I felt safe in Mexico,” said Alfredo Corchado, the Dallas Morning News Mexico Bureau Chief, when he took the podium as he returned to his alma mater to deliver The University of Texas at El Paso’s Centennial Lecture Thursday.

Corchado presented his book Midnight in Mexico – A Reporter’s Journey through a Country’s Descent into Darkness, which will be released at the end of May. He also took the opportunity to do his first ever reading of the book to a full auditorium with his parents sitting in the front row.

A 2009 Nieman Fellow at Harvard and a 2010 Rockefeller Fellow and Woodrow Wilson Scholar, Corchado, native of Durango, Mexico, he won the Maria Moors Cabot award from Columbia Journalism School in 2007 for extraordinary bravery and enterprise. In 2010 he was awarded Colby College’s Elijah Parish Lovejoy Award for courageous journalism.

Borderzine interviewed him at UTEP prior to his presentation.

Borderzine: What kind of hardships did you face growing up in an immigrant family?

Alfredo Corchado:  I think for me it was not knowing why we had to immigrate. I love Mexico and I think we had a great life, but you have all these high expectations of the United States. In the San Joaquin Valley we ended up sharing a trailer with about a dozen men, and you’re thinking “que país tan gacho.”

B: Where did you land your first job as a journalist after graduating from UTEP?

AC: My first job was at The Wall Street Journal in Philadelphia. I did a story on scallop smuggling that became front page. Then I returned to El Paso writing a story on the 1987 proposed immigration reform law, which was also front page.

B: How did you become interested in writing about drug cartels?

AC: I wasn’t interested at all. At first, I was like many other Mexicans who’d rather look away and not face the problem, but at the station we went from a bureau of 13 reporters to one, and I had no other choice but to start covering the topic, unwillingly. It shows how naïve I was because I didn’t know how dangerous it was and didn’t measure the consequences.

B: How many death threats have you received?

AC: I have received four threats. The first one while I was in Juarez. I got a phone call telling me that they knew who I was and where I was. The last threat was in Mexico City in 2007. I had just won the Maria Moors Cabot award. The U.S. ambassador called me and said he had “…information that they were going to kill an American journalist in 24 hours.  “Three names came up and one of them is you, and I think it’s you.” That was the one that just floored me; in some ways that was what led me to write the book. That’s how the title came up, after the threat, it was midnight and I thought ‘my God, I hope things get better by dawn.’”

B: What advantages do you have as an American journalist working in Mexico?

AC: That if they kill you, the American government and your colleagues will make a big deal about it. It is a billion dollar industry so they don’t want to bring that kind of attention. Another advantage I have is that if I get any sense of danger, I have the understanding of my newspaper to go straight to an airport and leave. Which my Mexican colleagues can’t do.

B: What made you write Midnight in Mexico?

AC: When I met with the publisher I thought I was writing a reporter’s journey, but they started seeing it more as a personal journey. It’s a story that not only represents me but thousands of people who cross through the southwest. A growing number of people in the United States who share a similar story still believe there is a better Mexico in the horizon. Those are the reasons why I ended up writing the book.

B: When you went back to Mexico as a journalist did you ever think you would be covering the stories you have so far?

AC: I thought I was going to be covering a much more prosperous Mexico. But people are now laying claim to their land, and not just pointing fingers at the United States saying your guns, your drugs. I think underneath that is a society that really wants to take responsibility for who they are and what they want their country to become.

B: Do you think Mexico has taken a step back by electing Enrique Peña Nieto as president?

AC: I think this is the biggest challenge for Mexico’s civil society. People think that the vote of July 2nd last year was a vote to return to the past. But I have my doubts and think people are just tired of the violence and they didn’t see an answer with the Calderon government. It is fascinating to see the role social media is playing in holding their government accountable.

B: How has Fast & Furious affected the image of the United States in Mexico.

AC: Badly, we saw the results last week with Obama’s visit to Mexico. Peña Nieto said no more to sharing intelligence. They want to centralize things; it’s a feeling of what has cooperation with the U.S. done – the killings are up, and then we have these embarrassing examples of Fast & Furious. Now we have to go back to square one.

B: What advice can you give to UTEP journalism students?

AC: You need to learn and know the new media, provide unique content, know the border and its problems because these problems now have much more relevance and resonance away from the border. I’d advise you to embrace your culture and who you are. Learn the basics and continue to use new technology.