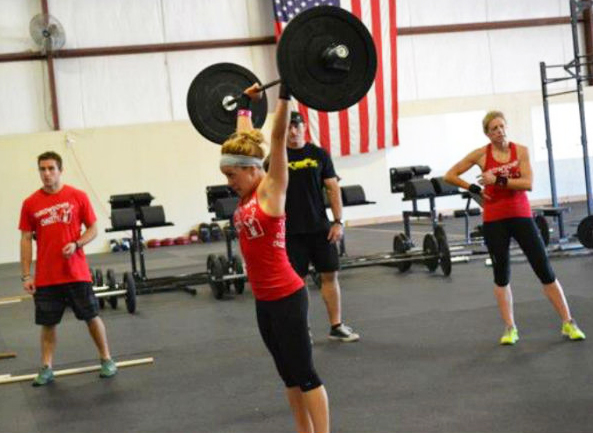 IMPERIAL, Calif.–Brittany Weiderman doesn’t look like a caveman, but she sure eats like one.  This five-foot tall, 115-pound beauty gets her muscle by push-pressing nearly half her weight and following one of the latest popular diets, the Paleo. “Going Paleo helped everything from my mood to my digestive system. I really noticed a difference in how I felt in a matter of days,” the 25-year-old El Centro hair stylist said. “I’ve had less bloating and more energy that lasts throughout the day instead of just spurts of energy.”

Weiderman converted to the Paleo lifestyle, which is gaining popularity like the previous fads such as the Atkins or South Beach diets.  Paleo has become famous all over the map, even in the Imperial Valley.

The Paleolithic diet, also known as the Caveman diet, gets its name from the idea that our bodies are made to digest foods that our hunter-gatherer ancestors consumed.  The paleolithic era was before the agricultural revolution, which proponents claim caused “diseases of civilization,” such as obesity, hypertension, and inflammatory diseases.

Brian Burgun, a 21-year-old trainer at the Cross Fit Imperial Valley gym here, was not always as in shape as he is today.  He admits that he was not especially conscious of how he was fueling his body, and it started to take its toll on him.  That changed when we opted for the Caveman diet. Brian Burgun, a 21-year-old trainer at Cross Fit Imperial Valley, does plyometrics, or box jumps, at his afternoon class in Imperial, Calif. –Photo by Taylor Zinn

“During my workouts, I felt as if I’d taken a magical supplement that gave me endless energy,” Burgun said. “Not only did my cardiovascular and muscular endurance improve, but my body began burning fat at a rapid rate.”

Yaritza Maceira, a registered dietitian at Fresenius Medical Care in El Centro, says that dieters should ease into Paleo, to avoid shocking their systems.

“This diet can be an adjustment for people who are accustomed to eating lots of dairy and grains,” Maceira said.  It can create an imbalance if you cut off those calcium and protein sources overnight.

“However, all of these nutrients can be found in the foods that the Paleo diet permits,” Maceira said.  “I would really recommend people to see a dietitian before they start Paleo, or any diet.”

The Paleo diet was one of the two lowest-ranking diets out of 29 in U.S. News & World Report’s January 2013 review of popular diets. The report notes that few if any scientific studies have been conducted on the Paleo, but “expert reviews” claim the Paleo falls short in long- and short-term weight loss, safety, heart health, and other fundamental dietary concerns.

However, Paleo-dieters like Weiderman would disagree with those results.

“Since I’ve gone Paleo, I’m no longer having stomach issues,” Weiderman said. “By cutting out all the processed foods and things our bodies weren’t really meant to process, it’s turned my health around.”

Any individual can adjust the diet to their body’s specific needs, Burgun said.  “The core of Paleo comes down to quality control. The next part, quantity control, is up to the athlete. You can adjust your meals as you figure out how your body is reacting to the clean eating. That’s the beauty behind it.”

Another important part of the Paleo diet is that it encourages the dieters to eat local foods. “I can get all of my produce and meat down here in the valley,” Weiderman said. “There are a few baking items I grab at Whole Foods when in San Diego, but the diet is based on unprocessed, fresh, and local foods.”

Weiderman said that although the grass-fed, free-range, and organic choices are more expensive, eliminating all the other unnecessary processed foods from her grocery list has kept the check-out prices fairly similar. A “Not So Fast” food truck parks at a farmers market in Pacific Beach, Calif. where hungry customers line up to get Paleo-friendly burgers and Paleyolkd protein bars. –Photo by Taylor Zinn

Philip Ainza, an El Centro native and a Paleolithic diet practitioner, saw the Caveman diet taking off.  He capitalized on it by creating and marketing “Paleyolkd,” a Paleo-friendly protein bar.

“The one thing I’ll say about Paleo is that it can be really inconvenient,” Ainza said.  Since there is no processed food permitted, dieters must carefully prepare all their meals every day. “That’s why I decided to experiment with making my own bars.”

Most protein bars and shakes are made from whey, which is dairy. Ainza thought to use dried egg whites as the source of protein in his Paleyolkd bars.  The ingredients include dates, dehydrated egg whites, pecans, cashews, almonds, walnuts, and coconut. These bars can be used as post-workout refuels, or as a sweet Paleo treat on the go.

“Yeah, I’d recommend the Paleo diet to anyone, not just to athletes or people who live an active lifestyle,” Burgun said. “Nutrition should be the foundation of anyone’s training hierarchy.”

I am a journalism student at Imperial Valley College in California who will be transferring as a communications major to San Diego State University.