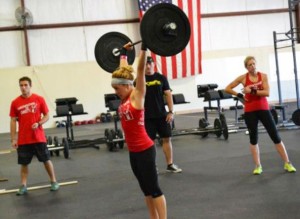 The “Caveman diet” is catching on among health-conscious gym enthusiasts

IMPERIAL, Calif.–Brittany Weiderman doesn’t look like a caveman, but she sure eats like one.  This five-foot tall, 115-pound beauty gets her muscle by push-pressing nearly half her weight and following one of the latest popular diets, the Paleo. “Going Paleo helped everything from my mood to my digestive system. I really noticed a difference in how I felt in a matter of days,” the 25-year-old El Centro hair stylist said. “I’ve had less bloating and more energy that lasts throughout the day instead of just spurts of energy.”

Weiderman converted to the Paleo lifestyle, which is gaining popularity like the previous fads such as the Atkins or South Beach diets.  Paleo has become famous all over the map, even in the Imperial Valley. The Paleolithic diet, also known as the Caveman diet, gets its name from the idea that our bodies are made to digest foods that our hunter-gatherer ancestors consumed.  The paleolithic era was before the agricultural revolution, which proponents claim caused “diseases of civilization,” such as obesity, hypertension, and inflammatory diseases.