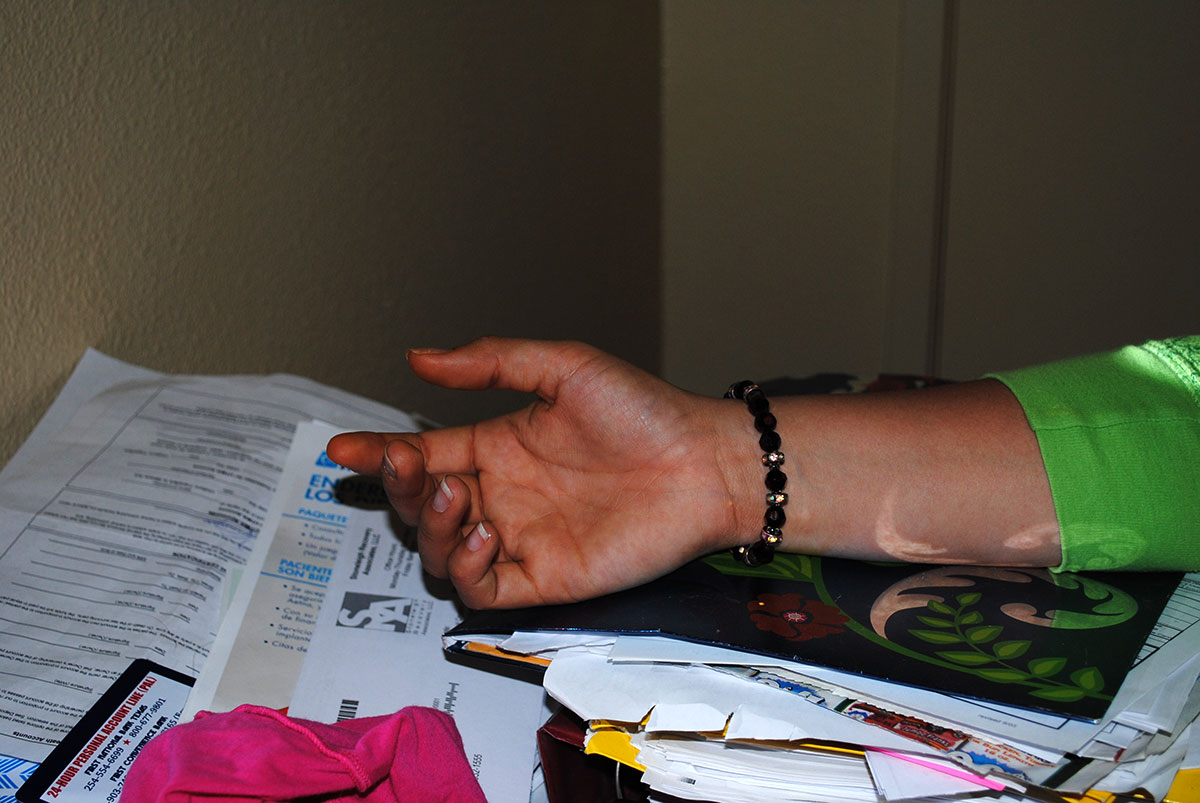 The National Domestic Hotline states that 15 percent of Americans admit to having been in a domestic relationship that included violence. (Azucena Santos/Borderzine.com)

EL PASO – On a regular workday, less than a year ago, Corina Rivera realized her life was in real danger.

She had been the victim of physical and emotional abuse by her ex-boyfriend and now he was calling, wanting to meet with her to apologize for the “incidents” that had occurred in the last two months of their relationship.

Rivera, 25, asked him to meet her in front of Wal-Mart. She thought a public place would be best. She noticed that he drove up in a car that was not his own. Immediately Rivera went on guard, something deep down told her, “something is wrong.”

Once face-to-face with him, she felt a flash of panic. He asked Rivera to leave with him, but she refused. The situation escalated. While grabbing and pushing Rivera’s shoulders toward the car, he said, “If you don’t go with me, I am going to pull out this gun.”  Rivera did not scream even though she clearly felt the metal of the gun. The National Domestic Hotline states that 15 percent of Americans admit to having been in a domestic relationship that included violence. (Azucena Santos/Borderzine.com)

“I just grabbed onto one of the red poles in front of Wal-Mart,” said Rivera. “He tried pulling me away, but I just knew something really bad was going to happen if I let go”.

A shopper was watching the interaction and called the police. Rivera was able to escape and got a court order to keep him away. “I knew if I left (with him), I don’t think I would be here anymore,” reflected Rivera.

A week after the incident, Rivera was informed that her ex-boyfriend confessed to a friend that he had talked about wanting to strip Rivera naked, tie her up, put her in his truck, throw her body into a tire pit and light it on fire.

A few short weeks after the incident, Rivera began to get her life back together. During a lunch with her best friend she was bombarded by text massages and phone calls from friends and family members asking her to check her Facebook page. Her Facebook profile had been hacked and someone posted nude photos and videos of her of a sexual nature.

Rivera knew who was responsible.

According to the federal funded National Domestic Violence Hotline (www.thehotline.org), when situations like this occur there is a link in Facebook (www.facebook.com/help/reportlinks) that removes indecent pictures and or video.

Rivera immediately contacted Facebook to have the pictures and videos removed. Friends and family members were supportive and offered her help, but the damage had been done.

“When we became boyfriend and girlfriend, that’s when it started,” said Rivera recalling the beginning of her abusive relationship.

The National Domestic Hotline states that 15 percent of Americans admit to having been in a domestic relationship that included violence.

According to Cecilia M. Holguin, a licensed clinical social worker here, the abuser is typically controlling, obsessive, belittling, and threatening. If you know someone who is in a domestic violent relationship, the best thing to do is explain what domestic violence is and be supportive, rather than telling the abused, “don’t be with him” said Holguin.  This way the abused individual understands where your concern is coming from because sometimes the abused do not see what is happening around them.

“Friends just wanted me to leave…I didn’t listen at first but in the long run [their advice] was helpful,” said Rivera.

Rivera’s daily life has changed since that meeting with her ex-boyfriend. She now carries a bat, checks her surrounds on a constant basis and constantly changes her daily route to and from work and home.

Even though Rivera is still afraid of what could happen, she believes in having her story told in order to help someone else in a domestic violent relationship. “I’m not embarrassed, everyone makes mistakes. You learn,” said Rivera. Currently she has no contact with the ex-boyfriend, she said, and is waiting on the court date for the charges she has against him.

I am a student at UTEP and will be graduating in December 2013.