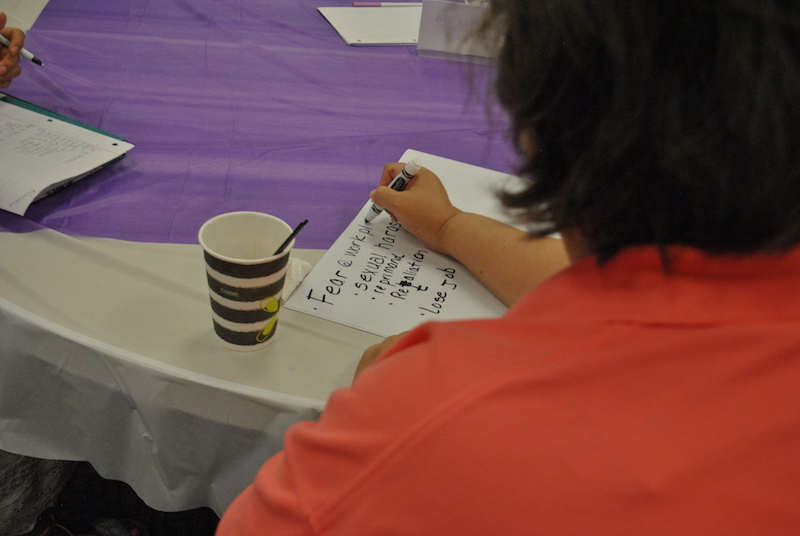 Several El Paso women’s groups are helping victims of domestic abuse by providing them with resources to resume a healthy, productive lives after leaving abusive relationships, speakers at a recent conference said. Univision anchor Karina Yapoor was among the speakers at the Wise Latina summit at El Paso Community College to raise awareness about services available to women.

Among the services provided for domestic violence victims are rental assistance, replacement of damaged property, medical bills, counseling, and protective orders from the County Attorney’s Office are available for victims of violent crimes, but shelter is the most need resource, said Jessica Ugarte, a certified crime victim compensation services provider.

“They’re used to receiving financial support from their abuser, so when they leave they’re not sure where they can go or how can they support themselves,” Ugarte said during the annual summit called “Enough is Enough. Ya Basta” on Oct. 6 at the El Paso Community College.

Abuse “was just something that was accepted and women dealt with. No one in my family has had to use this, everyone just kind of dealt with it, but now, I think it’s awesome that we’re breaking that norm and moving forward,” said Stacy Arrieta, a case manager at El Paso First Health Plans.

“I didn’t even realize how many groups are available for people in domestic violence,” Arrieta said.

Ugarte and other speakers addressed about 150 people at the annual summit with the goal of improving awareness and empowering women to deal with sexual harassment, assault and domestic violence. The organization serves women in El Paso, Las Cruces and Ciudad Juarez. Liz Chavez, president and founder of Wise Latina International, welcomes participants with a speech at the 2018 summit “Enough is Enough! Ya Basta!” at El Paso Community College.

Speakers and attendees noted the irony of hosting their event on the same day the Senate voted to confirm Judge Brett Kavanaugh to the U.S. Supreme Court. Kavanaugh was accused by more than one woman of drunken behavior and attempted sexual assault.

Among the accusers was Christine Blasey Ford, a Palo Alto University professor, who said Kavanaugh tried to sexually assault her while they were teens in Bethesda, Md. Kavanaugh denied the accusation.

“The fact that the (Ford) story was kind of brushed aside and not given the attention that was necessary was a slap in the face for so many women,” said Liz Chavez president and founder of Wise Latina International.

“We know that we’re in a very critical time in our society and we need to be able to raise awareness, educate, and empower our women to deal with sexual harassment, sexual assault, and domestic violence,” Chavez said.