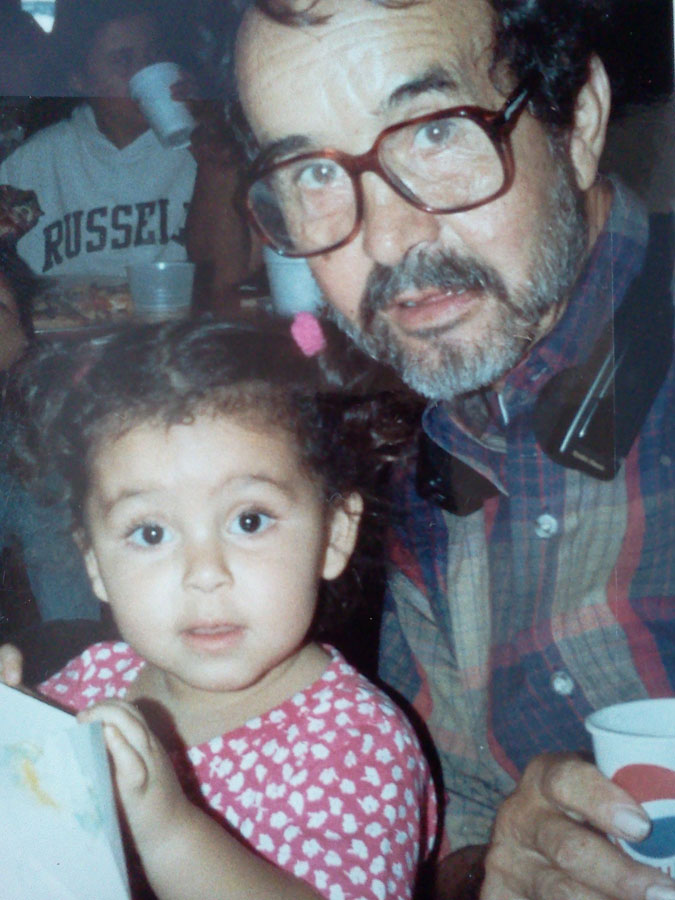 EL PASO – Life was beautiful until the year my grandpa started forgetting. The first time I noticed his memory loss I was 15 years old and he was 75. Grandpa walked through the front door, sweaty and breathing hard.

“Mickey, ¿qué pasó? What happened?” my grandma called, running from the kitchen.

“No sé donde está el carro,” he said, staring at the floor shamefaced. “I don’t know where the car is.” It hit me that he was exhausted because he had walked all the way home from wherever he had driven. Our immediate thought was that the car had been stolen, but it turned out that grandpa had driven to the store to buy milk, forgotten he had driven there, and walked five miles home. Once home, he couldn’t even remember what store he had gone to. It took hours to find the car. I was more terrified than I’d ever been in my life because this kind of behavior was not normal for a man as intelligent as Mike Martinez, my grandfather.

Mike Martinez accomplished many things in life. He was a horse-jockey, a boxer, a mountain-climber, an Air Force MP, a teacher, and forever a scholar. As my only father figure he took on different roles as playmate, partner in adventure, and groom in my make-believe weddings.

My childhood memories are colored by the bright red laces of his hiking boots and scored with the classical records of music by Mozart and Carmen, the opera he loved. Those memories are also infused with the sweet scent of Aramis cologne that lingered in the air long after he got dressed to go to work in the mornings.

My days were filled with his wonderful stories and experiences. It’s with a deep sense of irony that I now recognize the car incident as the beginning of a nightmare called Alzheimer’s disease.

My grandfather’s memory loss became worse as time went by, and then came the ‘sundowners’ phase. It was like clockwork. At six in the evening his open and intelligent face would physically change. His brow would crease, his eyes would dim, his shoulders would hunch. He would pull out his keys, throw them on the kitchen table and demand to know what each one was for. No answer would satisfy him. When darkness fell he would holler at us to turn out every light in the house because an enemy was watching and we were making ourselves targets. He paced the house like a madman, trapped in scenarios that were not real, his usually kind voice turning harsh, sharp, unyielding. For me, it was like living with Dr. Jekyll by day and Mr. Hyde at night.

My family lived a double life with him for over a year. I couldn’t explain to my friends at school what was happening at home. When I said the word Alzheimer’s most of them thought it was actually the kind of cute, endearing forgetfulness that happens to many senior citizens. I didn’t know how to explain the sleepless nights, the fear that he would drive away again and get lost, the fine line we walked between allowing him his freedom and our need to watch him at all times. The problem grew until my family came to a heart-wrenching decision. Grandpa needed a nursing home to give him the help we could no longer provide.

The problem was affording help. Although we weren’t a rich family, money for the basics never seemed a problem until we could not afford his healthcare. He had been a member of the working poor all of his life, feeding his time and energy into the system as a teacher day after day, putting nose to the grindstone to stay afloat. He paid his taxes and followed every law diligently. But in his hour of need grandpa was denied Medicaid because of a technicality about his income. In other words, we were not needy enough to qualify for financial help, but nowhere near rich enough to afford a $4,000-a-month nursing home. Out of desperation, we hired a lawyer to fight our case, spending thousands of dollars in savings in the hope that he could win. By the grace of God, we won my grandfather the right to Medicaid.

At age 82 he now lives in a modest nursing home in the lower valley and I try to visit him as often as I can. I can’t describe the pain of watching someone you love and admire wasting away before your eyes in a place away from home. Alzheimer’s is a cruel and swift thief that, measure by measure, steals every memory that makes up a person’s identity. What are we but the memories we’ve made, after all? I used to call grandpa the walking encyclopedia. Now, when I look at him I can see that his hard-fought-for knowledge is gone, along with the memories he made with his granddaughter.

Although they don’t exist for him anymore, the memories do exist in me.

If my grandpa’s Alzheimer’s has taught me anything it is the power of memory.

In a way, I am my grandpa; I am his knowledge, his sense of adventure, and his drive. And because of this I will always carry him with me.

I grew up in El Paso and have been incredibly influenced by the unique border culture I experienced as a child .I discovered early on that my greatest passion is writing, both in journalism and for recreation, and I know that whatever I do in life will involve writing. I have written for the UTEP Prospector as a news reporter and enjoy it immensely, and someday I'd like to put my communication skills to good use in a non-profit organization.

One thought on “When Alzheimer’s strikes, a granddaughter’s memories keep his spirit alive”