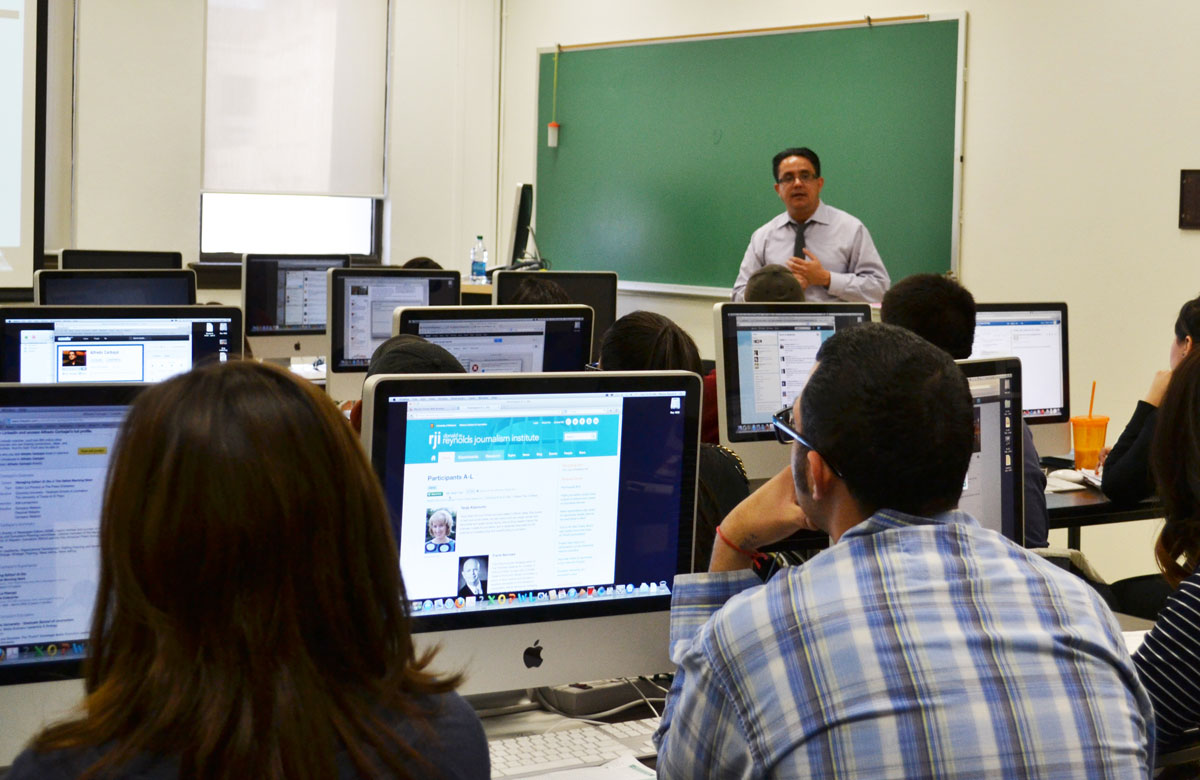 EL PASO – As a reporter prepares to write an article, he tweets his audiences informing them how the story is going to develop and then rushes to write a short-short piece for online publication. That’s not your old man’s journalism – that’s today’s reporting.

“That’s a story, short story, kind of what we call an AP lede. They are just telling us what happened right away. That’s all we need to know,” said Alfredo Carbajal, Editor of Al Día, a weekly Spanish language newspaper in Dallas.

“Language is an indicator of culture and culture is directly related to identity, and identity is directly related to your world and your news consumption,” Carbajal told journalism students recently at the University of Texas at El Paso. Carbajal graduated from UTEP with a degree in print media and returned to his alma mater to speak to future journalists.

The founding editor of Al Día, which is associated with The Dallas Morning News, Carbajal is a member of the National Association of Hispanic Journalists (NAHJ) and travels in Texas, Arizona, and California to recruit young journalists for his newspaper. Carbajal said students here on the border are unique because they are exposed to different cultures. (Cristina Esquivel/Borderzine.com)

He told students that technology is of paramount importance in today’s journalism and that qualified journalists need to know how to write a variety of stories from different angles and how to produce multimedia packages that can include articles, photos and video. “That’s the kind of individual that we want. When I’m recruiting, we want that kind of professional,” Carbajal said.

A Juarez native and UTEP journalism alum who worked for The Prospector as a student, Carbajal said today’s students should get as much practical experience as possible in their field and be able to show that they can cover breaking-news stories. “Don’t ever forget that what we do is important because we want to expose, we want to inform, but if nobody wants to consume what you’re doing then that is a problem,” he said.

Carbajal emphasized the importance of being a prepared journalist. Basic skills such as writing, reporting, and practicing ethics in their work are important, he said, and joining organizations such as NAHJ, Society of Professional Journalists and Online News Association is part of the “equipment” a journalist has to have. “I’ll tell you this, it changes your life. It opens a lot of doors,” he said.

He encouraged students to work on their portfolios and on skills such as video, audio, briefs, and social media. Carbajal also suggested that students look for internship opportunities including at Al Día for summer of 2014. “So, the idea is apply to as many things as you can possibly do, and be there, be ready, it’s fun,” he said.

According to Carbajal most cities in the United States are becoming increasingly Hispanic and the media has to adapt to that. Spanish-language newspapers like Al Día are paving the way for publications that can reach bilingual audiences, he said.