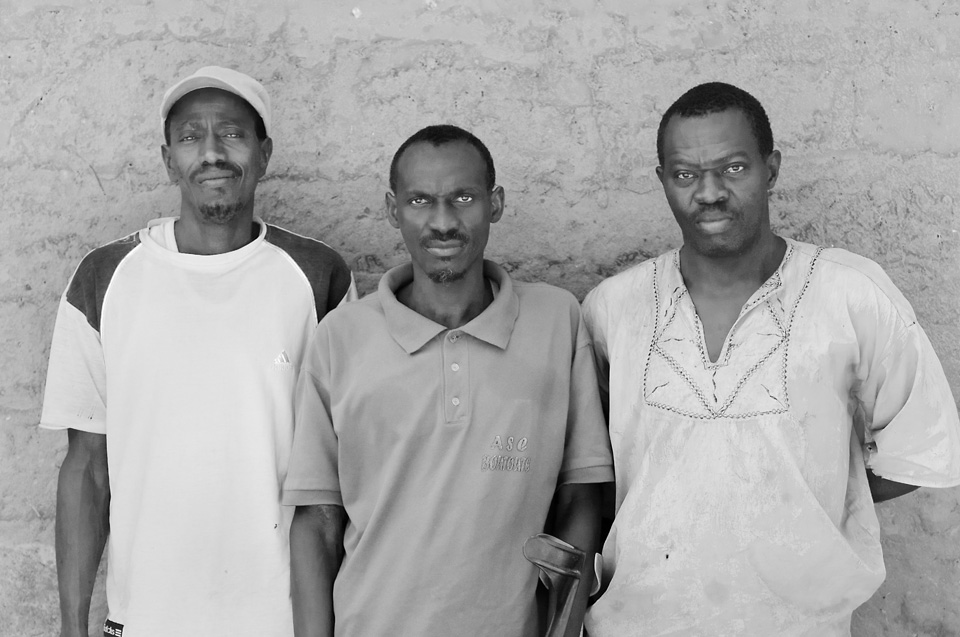 Charles Ndeki, Bourama Seydi and Lamine Fati all stepped on land mines on their plantations in Senegal, West Africa. In his interview with Brinegar, Bourama said, "Journalists, they come and they ask us questions, take our picture and they write and then they leave and nothing happens." (©Felipe Jacome)

EL PASO – Last summer I was standing in front of the Martyr’s Monument in Dhaka, Bangladesh.  There was this being, an old man, lying on a thin mat. He looked like he was dying there as people walked around him, unchanged. One, two, three…I could count his ribs. His arms and legs were as thin as a broomstick, bones jutting out like knobs in wood. He was a picture of starvation that you could stick in a ‘Feed the Hungry’ ad and he was lying right in the middle of this bustling city. Charles Ndeki, Bourama Seydi and Lamine Fati all stepped on land mines on their plantations in Senegal, West Africa. In his interview with Brinegar, Bourama said, "Journalists, they come and they ask us questions, take our picture and they write and then they leave and nothing happens." (©Felipe Jacome)

For a moment, I felt like the man and I were frozen in time and everyone else was moving without us, unfazed. No one did anything or seemed shocked by the sight of him. I couldn’t look away, but just like everyone else, I walked right past him and did nothing. I wanted to take a picture, but I knew that would be insensitive.

The picture is burned into my brain anyway. In four days I’d be back in the United States. For three years I’ve lived like this, traveling seamlessly between separate worlds–worlds of the privileged and the deprived.

I grew up in a middle class family and ever since I was a girl, I’ve only said I wanted to do one thing: change the world. So when I graduated from Franklin High School at 18 years old I jumped at the chance to live and volunteer in Africa. I carried a suitcase of clothes and shoes, a backpack full of paper, books and cameras and the heaviest load of them all, expectations of making a huge difference. I lived with a host family in a small rural village in Senegal, West Africa and volunteered at a health clinic and elementary school.

I have always had a passion for writing, so I anticipated becoming a change agent through journalism and storytelling and that same year I got my “big break.” I was selected by the International Committee of the Red Cross to report on the low-level conflict in the Casamance, the southern part of Senegal. For 10 days I collected interviews from 27 different land mine victims, all of who had lost limbs. I traveled with a translator and carried nothing but a notebook and a recorder that is now filled with interviews in seven different languages, but they all translate to the same story–a story of loss and a generation raised in conflict.

After my time in Casamance, I returned back home to my host family and began transcribing the interviews. The village was always noisy with the sounds of children playing, roosters crowing and livestock rustling so I found myself an empty building with a dusty desk. Every day for a week, I’d curl up under the desk in the nook where a chair belonged and I’d listen to the interviews.

“I have given up on life,” Kinta Mane said. She had lost a leg to a land mine, had no family left and couldn’t work because of her condition. I remember her glassy eyes and the worry wrinkles in her face. They were little shelves that held stories of agony and became salty pools when tears would sneak out of the corner of her eyes and fall into the crevices. Kinta Mane was in a car traveling from Guinea-Bissau to Senegal when the vehicle ran over a landmine. She lost one of her legs in the accident. "I have given up on life," Mane said in her interview with Amanda Brinegar in 2011. (©Felipe Jacome)

I replayed the interview with Charles, Bourama and Lamine, three landmine survivors, several times. I can still picture their faces with bitter, cynical smiles. Just before the interview ended, Charles said to me, “Journalists, they come and they ask us questions, take our picture and they write, and then they leave and nothing happens.”

With no response, I had put my pen down after he said that. For the ten days I had been in the Casamance, throughout all of the interviews, I had remained professional, as a journalist should. My translator had even asked, “Do you feel anything?”

All of that ended when Charles spoke those words to me. I did feel; I felt it all.

I remember sobbing every time I’d listen again to these stories. I didn’t feel like a journalist at all, but Charles was right, I wrote his story and nothing happened.

Since 2010 I’ve spent time in three different developing countries: Senegal, Bangladesh and Thailand, all the while trying to figure out how to make something happen. I’ve become obsessed with these types of places and prefer to spend my money on a plane ticket to developing countries rather than popular vacation spots.

I remember the night before I boarded the plane to Senegal. I had a sudden profound realization that I was choosing my own path in life. Rarely do we have moments when we consciously make a decision that will greatly affect the rest of our lives. This feeling quickly turned into anxiety and panic. I knew that what I would see in Africa, I could never un-see. I would no longer be able to ignore the realities of the world. I have now seen poverty and suffering on an intimate level. Although I may not know how to make a difference yet, I do know that there is no turning back.

And I’ve picked up my pen again.

Amanda Brinegar is currently a student at the University of Texas at El Paso, double majoring in Cultural Anthropology and Multimedia Journalism. Last year she participated in a bridge year program called Global Citizen Year. She lived in Senegal, West Africa for seven months, serving the community, working in education and public health. She won an international young reporters competition with the International Committee of the Red Cross and completed a project about the struggle faced by land mine victims. Amanda graduated from Franklin High School where she was editor-in-chief of her yearbook and features editor of her newspaper.