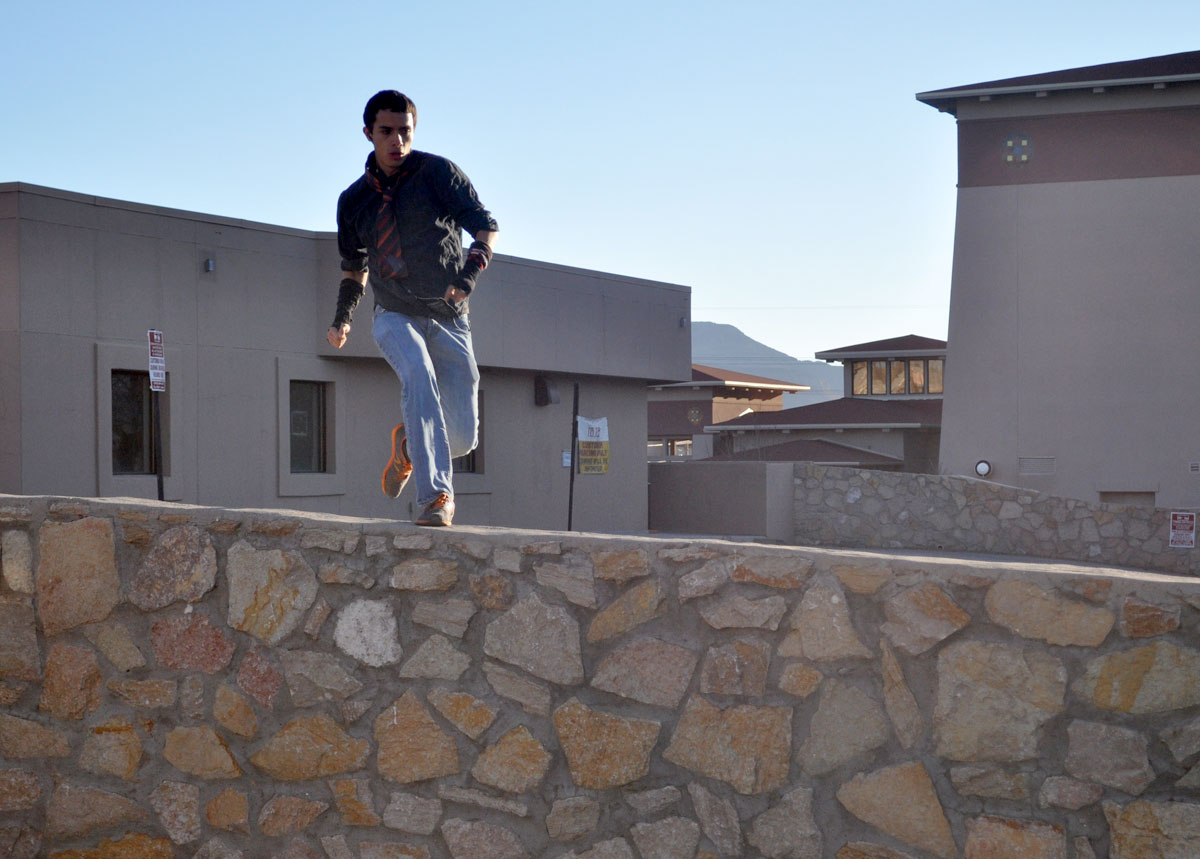 George Hinojosa practices Parkour because he believes it is useful in everyday life. (Alejandro Alba/Borderzine.com) George Hinojosa practices Parkour because he believes it is useful in everyday life. (Alejandro Alba/Borderzine.com)

EL PASO – Everything began back at Anthony High School. George Hinojosa along with his two best friends began practicing Parkour along the school hallways and jumping over cafeteria tables gracefully.

Parkour is the physical discipline of training to overcome any obstacle within one’s path by adapting one’s movements to the environment.

A year later, Hinojosa now finds himself taking on more challenging barriers and obstacles, such as the break along the staircase in front of the Psychology Building at the UTEP campus.

Hinojosa said he took on the practice of Parkour to feel some sort of superiority, soaring through crowds and jumping from buildings that are 10 feet high.

“I basically wanted to feel awesome,” Hinojosa said, now a junior organizational and corporate communication major at UTEP. “But once I began getting insight into Parkour, I began to realize it had its skill and art.”

There are three essential skills to Parkour, according to Hinojosa. The first is to know your limits in order to know what you are capable of doing. Secondly, you must have courage, and lastly, you need to know how to roll.

“I can’t stress enough how important it is to roll. If a person doesn’t roll, all their micro fractures will start showing by the age of thirty,” Hinojosa said. “Whenever you land and don’t roll, your knees get hurt, but by using a special technique, which is rolling, you safely land, avoiding any damage to your kneecaps.”

Mike Veloz, a junior psychology major, said he has mixed feelings towards the sport. He thinks Parkour can be a cool and inventive way to get a thrill, yet he thinks it’s probably one of the most dangerous activities a person can do. “It requires bravery for expressing yourself in a public place like the university where there are people all around who might think of you as unusual,” Veloz said.

Hinojosa said that people such as Veloz often ask him if the activity is dangerous, but he has never been hurt from practicing Parkour. He has also been asked to give insight into the sport, as well as perform tricks for students across campus. “People ask me all the time to explain what it is I do, yet no one really gets interested enough to join me,” Hinojosa said. “I am the only one that does it at UTEP and I would like to have someone to train with. I’ve heard that there is another person, but I have never seen them.”

With so much skepticism toward the sport, there are actually two different types of Parkour, and spectators often confuse the two. The first type is free running, which is where people can compete for money by using Parkour. Hinojosa said that style is presented with much complexity in flips and tricks. The style can be witnessed in TV shows like “MTV’s Ultimate Parkour Challenge.” The second type is much simpler, and is one that Hinojosa enjoys. It is the practice of basic skills that can be useful in everyday life.

“With Parkour, you are trying to be useful and you are also doing a work out. There really shouldn’t be a competition,” Hinojosa said. “This is my workout; I don’t like going to a gym to lift weights. This keeps my interest. Weights are boring. I think it is all about using the world as your playground.”

For Hinojosa, “being useful” in Parkour means that instead of giving into the “cattle mentality” where everyone follows everyone else, you learn to be analytical and think critically as you navigate through your daily routes.

As a future goal, he said he wants more people to learn about Parkour, especially women. He has decided to partner up with “Take Back the Night” and let women know that they can learn Parkour as a self-defense.

“I believe it would be more efficient than learning kickboxing or carrying a Taser,” Hinojosa said. “Due to Parkour allowing the individual to analyze their surroundings, women would be able to escape the scene if they encounter a man who is after them.”

Candice Moreno, a junior accounting major, finds Parkour interesting, not only for the peculiar stunts individuals perform but also because it can be useful.

“If Parkour really works as a self-defense act, then I am willing to take up on it,” Moreno said. “You never know when a man will try and rape you, even worse, kill you.”

One thought on “Parkour teaches students courage, self-awareness, and how to roll with the jumps”