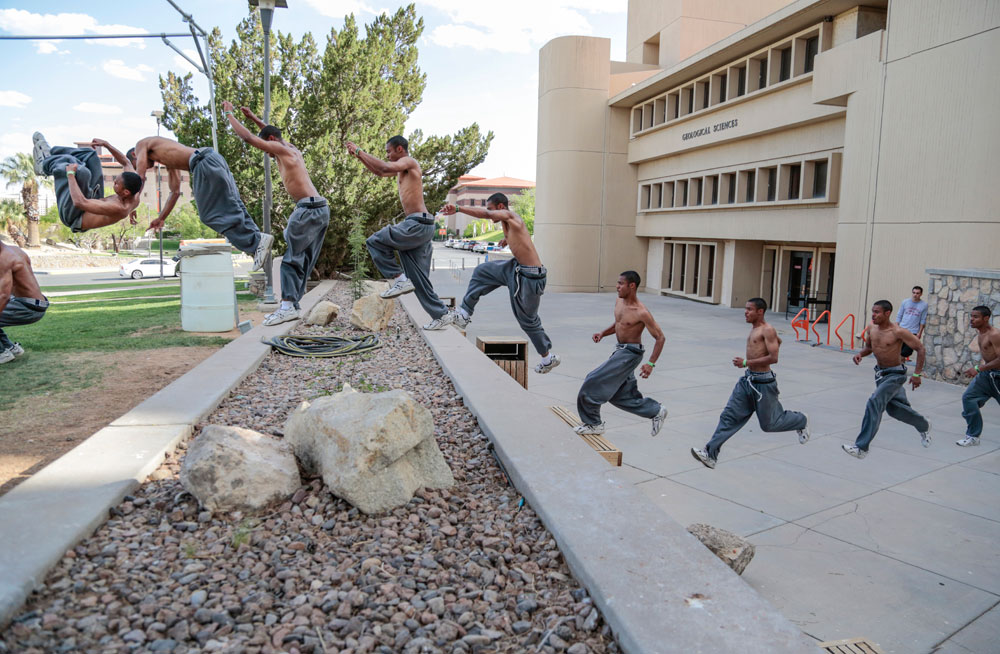 EL PASO – It is a warm Sunday afternoon and a group of young men has gathered at the University of Texas at El Paso to practice parkour (PK) – the gymnastic art of overcoming all obstacles by leaping, springing, and vaulting. More than physical exercise, parkour is a way of life to its practitioners. Dressed in sporty outfits, they begin stretching and warming up for the workout ahead. A large cloud has just covered the sun and the young men smile in admiration. It’s going to be a great day.

After an intense warm-up, their eyes scan their environment, probing every inch of the campus in search of ways to create art in motion. These young men are known as traceurs, a French word for bullet, and to them PK is as essential to their lives as oxygen.

“At its basics, parkour is getting from point A to point B in your own manner, in the most efficient way possible, overcoming any and all obstacles along the way,” said Angel Flores, 25. Flores and the rest of the guys belong to El Paso Parkour, a branch of Texas Parkour, which counts about 100 members throughout the El Paso area. Flores is also a certified parkour coach.

In a traceur’s cognitive process, one person’s picnic table is their obstacle course. Aside from getting to point A to point B, parkour has evolved into incorporating movements found in gymnastics and breakdancing. Leaping, springing, and vaulting from object to object are part of what makes this physics defying feat a spectacle to see.

“I have been doing parkour since I was 13, since the first day it has become a passion. Parkour is not just a sport but a way of life for me,” said Luis Cabral, 16. To many traceurs, their passion started with jumping all over the place without being formally introduced to the sport.

“I used to do flips and jumped around. I didn’t know it had a name until a friend told me about parkour. When I searched Youtube.com for parkour videos, I was blown away from all the amazing things they were doing. It was love at first sight,” said Alek Villarreal, 17. The development of parkour is largely credited to David Belle, a French physical educator, stuntman and actor, in the late 1980’s. Raymond Belle, his father, had passed down philosophies and movements he had learned in his military service during the Vietnam War.

Traceurs are not hoodlums or ruffians who want to break everything in their path. In fact many of them follow an ideal they call Leave no Trace. When traceurs practice, they try to leave the area as though they had never used it.

“I respect and encourage others to respect the property that we are on and preserving nature so it keeps growing. People own the stuff we’re on top off and it’s very important to respect their wishes, even though it might limit us,” said Flores.

When they are not exploring the concrete jungle, traceurs meet up at local gymnastics gyms on open gym nights. On Thursday nights a group of traceurs meets at an El Paso’s gymnastic gym called Elite on the eastside.

“I used to host a multi-state jam with over 50 traceurs coming from around the nation to train for two days in El Paso and Las Cruces. I eventually had my own academy at Elite and El Paso Sport, which at its highest point had 30 students,” said Tony Olmos, 25. Olmos said he had to leave that behind due to work obligations and because he tore almost every ligament in an ankle. Angel Flores doing a back flip off a fire hydrant. (Ezra Rodriguez/Borderzine.com)

Besides the occasional bumps and bruises, traceurs insist parkour is a safe sport when done correctly. Even tough traceurs minds might act on impulse their bodies don’t. Before they try a new stunt they make sure they have every movement, including the possible ways they might fall, premeditated. They go through a number of short repetitions until they are sure their execution will be successful.

“Parkour has saved me from a lot of injuries because of the amount of safety that we do beforehand. Also we do a great amount of practice at gyms where there is padding,” said Villarreal.

Flores and his fellow traceurs agree that through the sport they have learned discipline, teamwork, and most of all respect for themselves and others. They encourage anyone to give parkour a try, but stress that learning parkour takes patience and practice.

To find out more about Texas parkour visit: http://www.texasparkour.com/

If you have a Facebook account you can join El Paso Parkour to find out about meetings at: https://www.facebook.com/groups/elpasoparkour/

One thought on “Traceurs blast like bullets vaulting obstacles, leaving no trace behind”