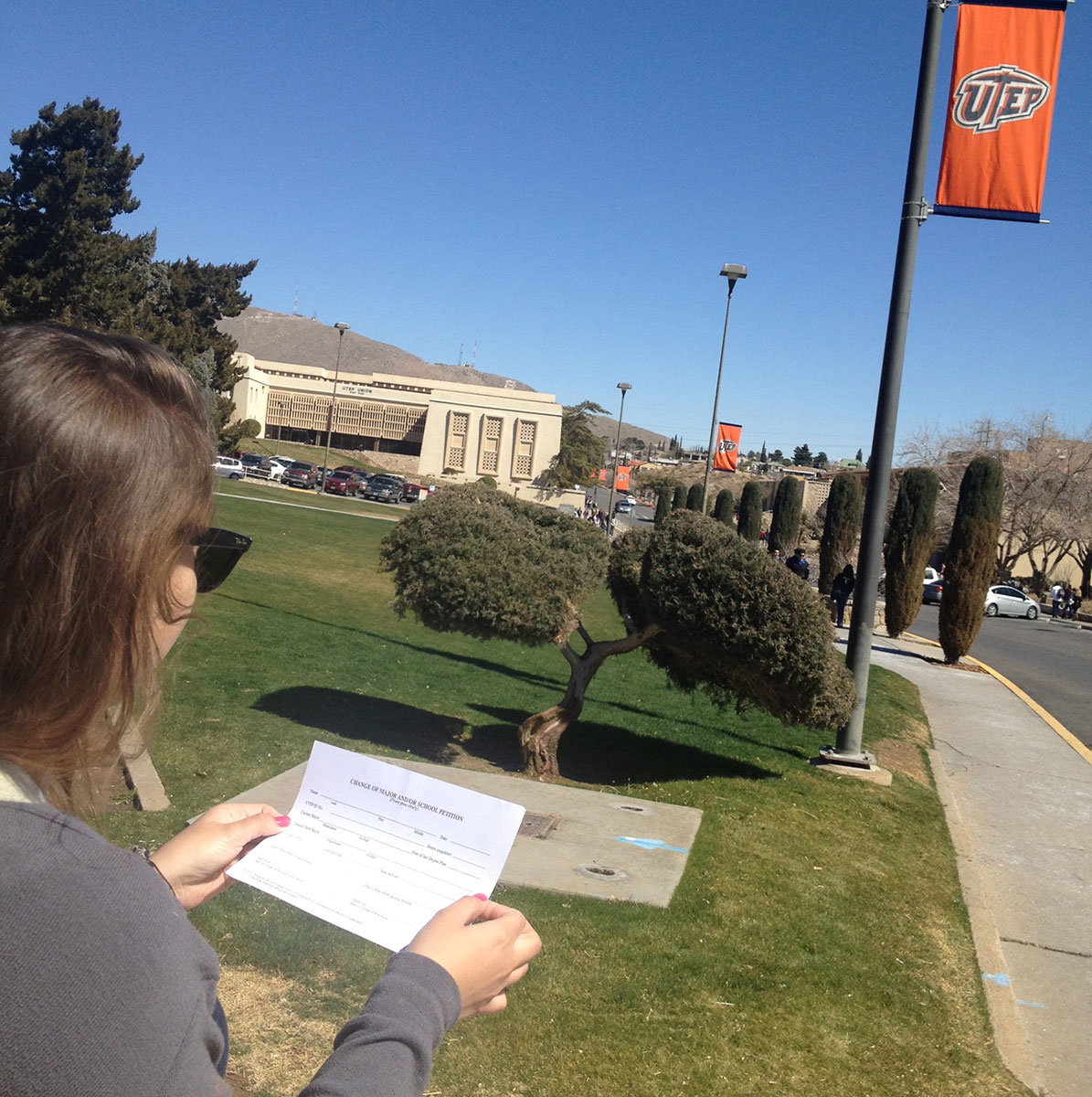 College students change their major at least three times over the course of their college career, according to the National Center for Education Statistics. (Yuritzy Ramos/Borderzine.com)

EL PASO — Choosing a college major is a hard decision for students to make because it can determine the student’s career future along with income level and having to pick a different one later piles on more stress.

“My dad wanted me to become an English teacher because he loves literature and reading books,” said Victor Chavez, a 29 year-old graduate of the University of Texas at El Paso.

Chavez gave into his father’s pressure and started his UTEP college education as an English major in 2004, but a year later he began to question his career path and switched to math after finding his true passion.

“I’d love teaching don’t get me wrong, but I really wanted to teach something that I was more passionate about–math,” Chavez said. College students change their major at least three times over the course of their college career, according to the National Center for Education Statistics. (Yuritzy Ramos/Borderzine.com)

According to the UTEP Center for Institutional Evaluation, Research and Planning (CIERP), between the fall 2011 and spring 2012 semesters, 14.4 percent of UTEP undergraduate students changed majors. A change of major can occur within departments, from business marketing to business management, or within the same college, from mechanical to civil engineering, and sometimes across colleges, for example, from education to health sciences according to CIERP.

Some students start college with a major their parents or relatives picked for them, not realizing that if they end up changing majors too far into their education it will take them longer to graduate. In most cases these students struggle to make a decision because they don’t know how to confront their loved ones about a career change.

“I talked to my father, a man who I admire and respect,” Chavez said.  “It was hard to confront him and tell him about changing majors since he was paying for school. I knew he wasn’t going to be proud of me anymore.”

Chavez graduated in May 2012 with a degree in math education, five years later than anticipated and after taking a two-year hiatus from school to earn money to pay for his own education. He says his decision to change majors wasn’t based on the job market, but on where he thinks he will have more opportunity to teach others what he loves.

“Even though my parent’s didn’t agree at the beginning and it took me a long time to graduate, I did. Today I’m a substitute math teacher and they do feel proud of me,” said Chavez, with a big smile.

Some of these students might have had a lack of academic advice or career counseling. According to CIERP, about 21.1 percent of freshmen students at UTEP changed their majors, 15.4 percent sophomores, 15.0 percent juniors and 8.1 percent seniors.

UTEP provides academic counseling resources and advice for undecided students to find out about some of their career choices. The University Counseling Center provides students with career counseling for their career goals.

“The counseling center is 100 percent confidential for the good of the students,” said Dr. Sherri I. Terrell, the Director of University Counseling Center. “We help students who are stressed out, either because of the pressure of their parents or lack of communication with them,” she said. Terrell said Career Counseling Services for the most part are free of charge to all enrolled UTEP students.

Virginia Segovia, 45, said that when she decided to return to school in 2004 after a 15 years hiatus she didn’t know that UTEP provided students with career counseling.

“I started as a Spanish teacher,” Segovia said. “I wanted to work with my first language and with kindergarten children since I love to be around little kids.” After taking classes in Spanish and education, she realized she would graduate more quickly and save money if she switched to multidisciplinary studies. She graduated in 2012, after taking classes part time for eight years. “ I already wanted to graduate; at my age it wasn’t the right time to be playing games,” she said.

“When I started school, I was already a grown-up student and I was embarrassed with all the young people around me. I wouldn’t talk to anybody or ask for advice,” Segovia said.

The idea of changing majors can be daunting, counselors said. A student who is contemplating a change of major should meet with a college advisor to approve the change. “The advisor gives you a petition for the change of major and the dean of each college for each major has to approve and sign,” says Fernanda Astiazaran, a 22-year-old, who switched from international business to an organizational communication major in 2012.

Astiazaran said when she began at UTEP her goal was to work in hotel management. “After some time I realized that UTEP didn’t offer hotel management, plus I didn’t like the accounting (courses) and some of the business classes at all,” she said.

She said she now feels pressure from her parents because they believe that the communication field isn’t in demand and it will be harder for her to find a job.

“There were some money issues as well,” said Astiazaran who expects to graduate in December of 2014, instead of this May as she had originally intended.

Like Astiarzaran, some students decide to change majors because they are struggling in basic courses for their intended major.

Chavez said that he is confident in his decision to trade change from learning to teach English to teaching Math. “To love what you do in your profession and in everyday life is really satisfying,” Chavez said. “To make your students love and enjoy what you love is a challenge, but I’m ready to take the challenge.”

Born and raised in the border, I’m bilingual in Spanish and English and confident public speaker. I have an Associate Degree of Arts in the field of study in Radio and Television Broadcasting. So far I have had two internships, the first one with Latinitas; a non-profit organization that empowers Latina girls with media and technology. The second one was with Disney College Program. I am future graduate on the summer of 2013 with a Multimedia Journalism Bachelors with a minor on Film. My goal is to obtain a challenging position in Broadcast Journalism, with a special interest in reporting and anchoring in Univision. I am a person who is positive about every aspect of life. There are many things I like to do, to see, and to experience. I see life as a challenge, and I like to be challenged.