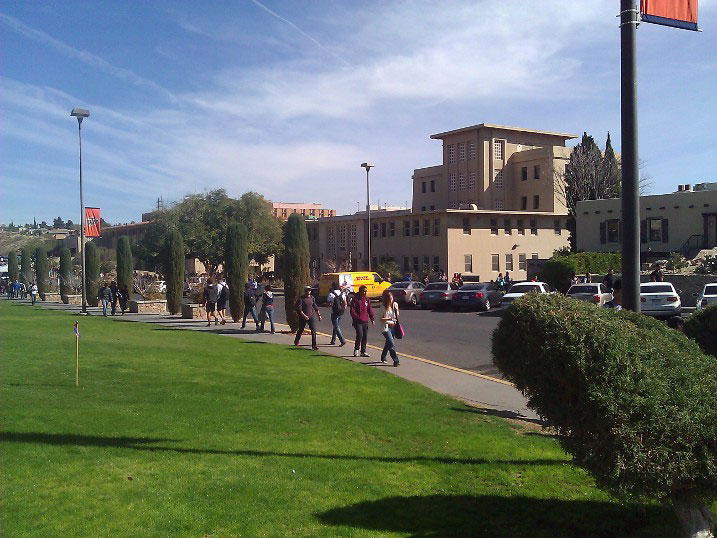 College students all over the nation experience higher levels of stress-related metal health issues. Counselors at The University of Texas at El Paso try to encourage students to seek help early on. (Photo by Elliot Torres/Borderzine.com) College students all over the nation experience higher levels of stress-related metal health issues. Counselors at The University of Texas at El Paso try to encourage students to seek help early on. (Photo by Elliot Torres/Borderzine.com)

EL PASO— With college enrollment constantly increasing, the number of students with mental health issues on college campuses has also gone up.

The National Alliance on Mental Illness (NAMI) estimates that anxiety, depression and general stress are on the rise. In 2012 “more than 25 percent of college students have been diagnosed or treated by a professional for a mental health condition within the past year,” according to  NAMI.

These are individuals who come into university and find themselves dealing with “stress, relationships, and adjusting to college life,” which happen to be some of the major issues weighing on student’s minds at The University of Texas at El Paso, says Cecilia Holguin, a licensed clinical social worker and one of several counselors at the University Counseling Center.

A major problem for these students is a lack of awareness that help is nearby.  “We always try to do outreach. We go to UNIV classes and we go to the health fairs. We were at Love Your Body Week, the career fairs and we present to sororities and fraternities,” Counseling Center of The University of Texas at El Paso, located at 202 Union West (Sofia Aguirre/Borderzine.com)

Holguin said that professors and other university faculty should be able to refer any student in need to the counseling center.

“Some students may not associate the UCC with personal counseling. It’s still very taboo, or they are just not ready,” Holguin said.

There may also be a stigma attached to seeking help, she explained. Some students may believe that only “crazy people” need counseling. But regardless of the shame students may feel, at UTEP there has been a significant rise in the number of cases at the UCC.

Sherri Terrell, Ed.D. psychologist and director of the UCC, said that in the past decade she has seen the number of individuals coming into the center go up every year. She explained that in 2011, 697 students, 265 of which were in a state of crisis, came into the counseling center. In 2012 about 768 students, 332 of which were crisis situations and as of April 2013, 682 students have come to the counseling center, with well over half of those students seeking guidance during a time of crisis.

“I think it has more to do with people knowing about us and feeling, I’m hoping, that there are fewer stigmas attached to coming to counseling,” Terrell said. “The ‘global issues’ seem to be depression, anxiety, and family issues. Those are the three most common reasons why people come in to see us.”

Hatty Lara, a senior psychology student at UTEP, said she has been at the university for three years and she just recently found out that it offers personal counseling.

“Had I known about the counseling center, I would have seriously considered taking advantage of it; I would have been reluctant though, because I’d then see myself as weak,” Lara said.

NAMI also states that 64% of college students who drop out do so due to mental issues. If more students were willing to overlook the stigma in order to get help, that rate would most likely drop, says Terrell.

“Forty percent of students who come to us say that they seriously considered dropping out. After a session with us only 14 percent are still considering withdrawal from the university and of that group only four percent are actually likely to drop out,” Terrell said.

The University Counseling Center offers a variety of counseling ranging from personal to group counseling. Specialized sessions for issues such as stress, depression, time management, and career paths are also available for those students in need.

“One of the things I’d like to encourage students to do, if they feel they are struggling, if they feel like life is getting just a little bit too hard, don’t wait,” Terrell said. “Give yourself a chance. Come in earlier to get the support and the help you need.”