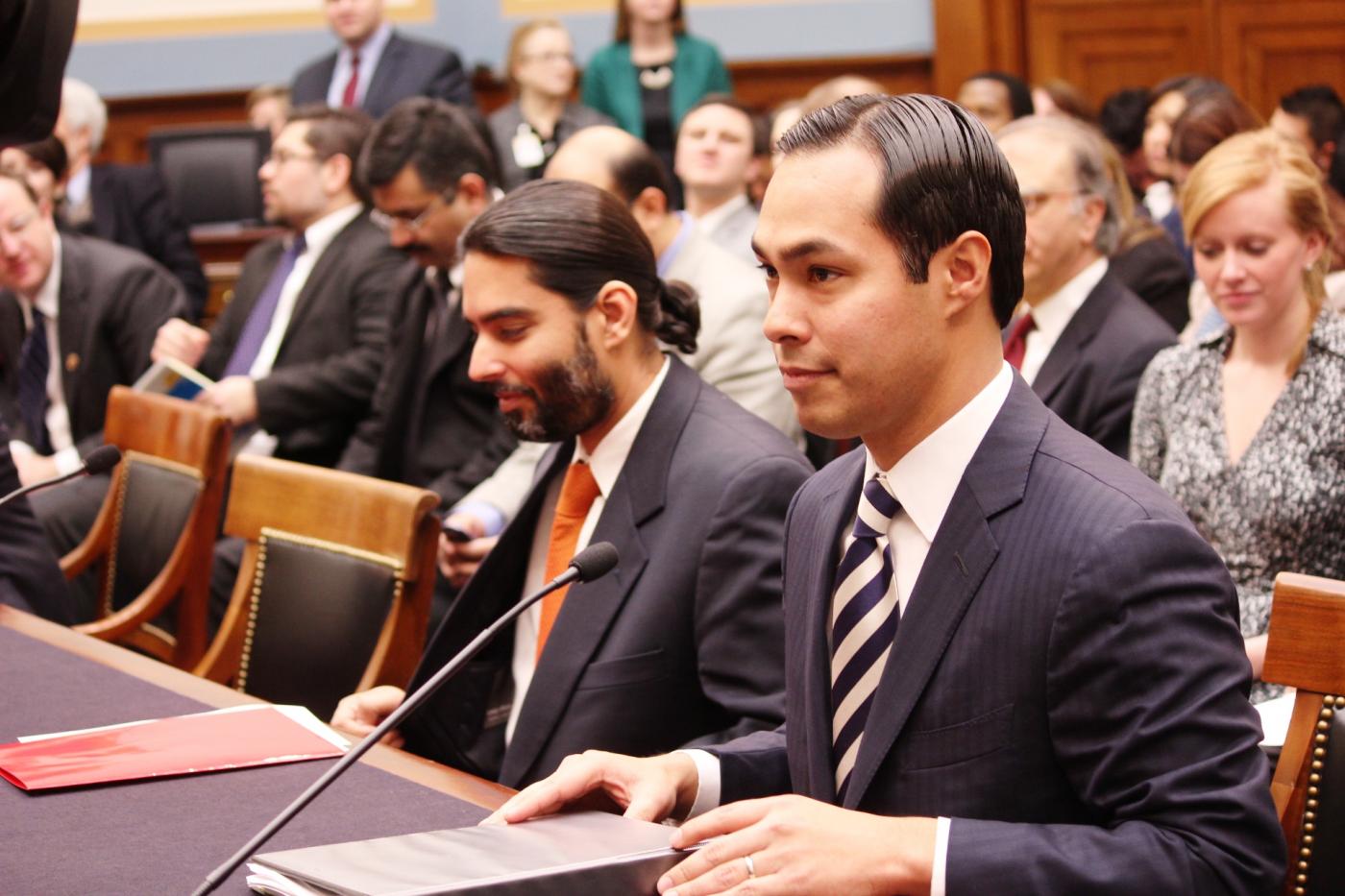 San Antonio Mayor Julian Castro, right, pushes for full-fledged citizenship for undocumented immigrants at a House committee hearing on immigration reform. He is sitting next to Puneet Arora, vice president of Immigration Voice, who supports citizenship for those with scientific degrees. SHFWire photo by Jasmine Aguilera San Antonio Mayor Julian Castro, right, pushes for full-fledged citizenship for undocumented immigrants at a House committee hearing on immigration reform. He is sitting next to Puneet Arora, vice president of Immigration Voice, who supports citizenship for those with scientific degrees. (Jasmine Aguilera/SHFWire)

WASHINGTON – A pathway to citizenship was the main topic of discussion Tuesday at a House hearing, the first to take place since proposals for immigration reform were introduced in the new Congress.

“I believe that is the best way and it is in our nation’s best interest,” Castro said. “We’re a nation of immigrants. We’ve progressed because we are pragmatic. Complete citizenship is in our national interest, our economic interest.”

Several committee members opposed Castro’s view, including Rep. Trey Gowdy, R-S.C., who said full-fledged citizenship was not a form of compromise and that immigrants with criminal backgrounds should not be granted full citizenship.

Neither the committee members nor witnesses defined what partial citizenship would entail.

Castro said that allowing for partial citizenship would create a second-class of non-citizens and would lead to discrimination. Protesters interrupt a hearing on immigration reform and chant “undocumented and unafraid.” The hearing took place Tuesday and was the first since reform proposals were introduced in the new Congress. SHFWire photo by Jasmine Aguilera

Midway through the hearing a group of DREAMers, young people who were brought to the U.S. illegally by their parents, interrupted and marched out of the building chanting “undocumented and unafraid.”

Committee members and witnesses seemed to agree that immigrants with expertise in science, technology, engineering and mathematics should be granted citizenship after they graduate from an American university.

Puneet Arora, vice president of Immigration Voice, a non-profit, fits into that category. He was born in India and moved to the U.S. for a post-graduate medical residency at the Southern Illinois University School of Medicine. He lives in the Minneapolis area and has a visa that allows him to work.

“We create opportunities for employment and invent valuable products for U.S. companies to sell in America and around the world,” Arora said. “We are not asking for thanks. We simply want a real place in America.”

Some committee members said immigration reform has to be strict with employers who knowingly hire undocumented immigrants, including a change in the E-Verify system, which allows employers to check the status of prospective employees.

Julie Myers Wood, former assistant secretary for Immigration and Customs Enforcement said it should be the government’s responsibility to verify the status of employees. Wood is now president of a consulting firm.

“It’s unfair to place that burden on employers,” Wood said. “That burden should be on government officials and experts who have the time to look for fraud.”

Rep. Bob Goodlatte, R-Va., the committee chair, said the hearing was the beginning of what will be “a momentous debate on immigration.”

He promised a thorough review and more hearings.

“Immigration reform must honor both our foundation of the rule of law and our history as a nation of immigrants.  This issue is too complex and too important to not examine each piece in detail,” he said.