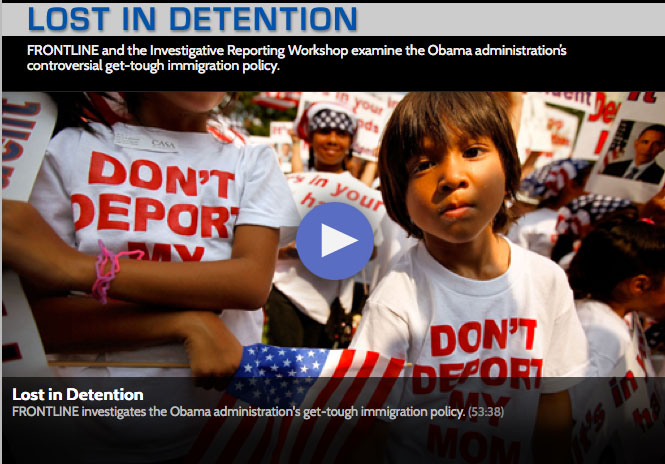 Lost in Detention, a documentary by Frontline and the Investigative Reporting Workshop. Lost in Detention, a documentary by Frontline and the Investigative Reporting Workshop.

EL PASO – A guard takes the hand of a woman, rolls her fingers on black ink, and is marked as an illegal immigrant into the computer as she looks around a room filled with guards and other detainees, not knowing when the next time she may see her children or husband after being pulled over by an officer.

Students and professors gathered at the University of Texas at El Paso on March 26, to watch a film screening of the documentary Lost in Detention, which was  hosted by Amnesty International. The meeting  highlighted the issue of abuse against immigrants that occurs in detention centers across the U.S.

“Right to freedom, right to public trial, rights being stripped from non-citizens. The whole issue is tainted. If we continue to fail, things will only get worse,” said Patricia Quezada, President of the UTEP chapter of National Movimiento Estudiantil Chicano de Aztlán (MEChA).

A Canadian woman, who went by the name Mary in the video, was detained by ICE and was sent to the Willacy, Texas, Detention Agency to await trial. Mary wanted to fight her deportation, but she had no attorney to help her. Immigration detainees don’t have a guaranteed right to an attorney.

During her stay at Willacy she was sexually abused by a guard and threatened with being deported and separated from her kids if she spoke about the abuse. “He said if you tell anyone you wouldn’t come out of here alive to see your family, so then who would you go and tell?” said Mary. Mary was told by a female guard that if she was going to go complain and write a report about her abuse, it will be worse for her.

Mary asked to be deported back to Canada and left behind four U.S. citizen children and has been unable to see them for more than two years. More than 170 allegations of sexual abuse have been reported at the Willacy  facility in the past four years. “There are many more cases that don’t get investigated, no access to lawyers, much less likely to have them step forward,” Anthony Romero ACLU executive director said in an interview in the film.

The video targeted the Obama administration, which has deported and detained more immigrants than any other administration. Over one million immigrants have been detained since Obama has taken office. The video showed cases of sexual, physical and mental abuse by the guards toward the detainees in the detention agencies.

The office of Immigration and Customs Enforcement  (ICE) needs to hit a target of 400,000 detainees a year in order to get more resources from Congress, according to insiders. Private sector prison companies operate 250 detention centers.

The video showed detainees who claimed they had been abused and stripped of their rights by the guards. “You don’t see stories about ICE; you have to tell others. It’s hard for migrants who are being abused; they can’t be the ones on the news. It’s up to us,” said Williams.

The panel wanted the audience to be aware of the widespread problem and help take action to prevent this abuse from occurring in the future. “Student organizations are effective. Encourage others to inform what’s going on, what’s being paid by our tax dollars,” said Beto O’ Rourke, a candidate running for United States House of Representatives this year. “As students, we have the ability to tell others,” said Quezada.

Stephanie Correa, who helped put together the conference, told students to get involved. “Talk to your representatives and get informed,” said Correa.

This conference was organized by Human Rights USA, an organization that undertakes research and action focused on preventing and ending the abuse to human rights.

Editor’s note: Lost in Detention can be watched at http://www.pbs.org/wgbh/pages/frontline/lost-in-detention/