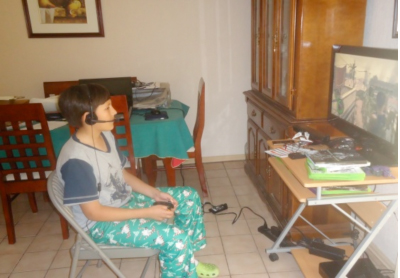 Screen time is one of the major factors contributing to the rise in childhood obesity rates. (Diana Arrieta/Borderzine.com) Screen time is one of the major factors contributing to the rise in childhood obesity rates. (Diana Arrieta/Borderzine.com)

EL PASO — Fresh fruits and vegetables are two food types children should be eating every day, but, not very many kids eat what they should and that is provoking a dangerous rise in child obesity.

“Things would go bad pretty quickly, and on top of that not very many people bought a lot of fresh fruits and vegetables,” says Cynthia Martinez, who worked for her parent’s grocery store in high school. “People, especially parents shopping for their kids, purchased Mexican candy, and chips and sodas for their kids,” Martinez said.

“We should be the healthiest at this age, yet I don’t think any of my friends can run a mile without stopping,” says Delyn Berry, 17, a student at Andress High School. “I think if kids knew that they needed to do it to be healthy from a young age, and that message was being brought to them, they’d be more interested in sports and stuff. All I wanted to do was play video games and sleep.”

The problem isn’t just in high schools, according to Eva Pena, school nurse at Newman Elementary. Five years ago Pena began noticing more overweight children, some as young as nine years of age.

“They’re just eating whatever they want all the time,” Pena said. “They also tend to have adult-like diseases, which in the past would’ve not been likely. The problem seems to get worse as they get older and more into bad habits.”

Pediatrician Nivrka Curbelo added that poor diet is not the only cause. She believes that parents also need to encourage their kids to turn off the video games and exercise.

Curbelo said that approximately 20 percent of the children in El Paso are overweight or obese. “And that is a pretty high number for a small city. Here (at Border Pediatrics) I see a lot of overweight children and the problem is almost always poor diet. Very few of obesity cases are from diseases or thyroid problems. In fact, most children who are obese have obese parents and siblings.”

She recommends nutrition counseling for children with weight problems. However, she has also noticed that children, teenagers especially who are overweight develop psychological issues, which make matters worse. “They develop anxiety and depression, which causes them to eat more and their self-esteem prevents them from joining sports or going outside, which leads to even more weight gain. It’s a vicious cycle”.

Child obesity is a growing problem nationally and according to the American Heart Association, one in three children between the ages of two and 19 are obese. These children also face a 70 percent chance of being obese as adults. The proportion of obese children between five and 17 years of age was five times higher in 2008 to 2009 than in the years 1973 to 1974. That means that the problem is growing. Obese Children are at risk for developing diabetes, cancer, cholesterol problems, and blood pressure problems.

The State of Texas implemented the CATCH program in some schools to help alleviate the problem of child obesity. The program promotes healthy living and encourages physical activity in children. Progress, however, has been slow. “The habits of overweight kids are taught to them by their parents,” Curbelo said. “It takes a lot of educating, which is hard to do to kids. They don’t understand completely why it’s important to eat healthy and exercise. Usually I try to fix the problem in young children, because they usually will grow up to be overweight and obese adults.”

Children who are obese will likely also have other issues in life. Statistics and studies done by Penn State show that obesity can lead to lower grades, and performance issues in school. Even here in the Borderland, students who are obese and/or overweight tend to be introverted and not as involved in school activities.

“Obese and overweight children are more introverted and to themselves, not as outgoing or active as those who are not obese or overweight; some introverted kids don’t focus in school very well, but some do, it just depends because there is a lot of academic help in schools to help kids succeed, but I do notice that kids who are overweight tend to be shy,” said Carmen Vela  a school nurse at Hornedo middle school. “Several studies show that obese children score lower on standardized tests than non-obese children. One study of nearly 1000 middle school students in an urban Texas district found that course grades in Math, Reading, Science and Social Studies, and Texas Assessment of Knowledge and Skills (TAKS) scores in Reading, Writing, and Math were lower for obese students.”

Parents of obese children might also face higher healthcare costs for their children and unexpected health issues: “The health consequences of childhood obesity are so severe that researchers believe the childhood obesity epidemic will lower life expectancy within a generation. During childhood, obese and overweight children have increased risk of joint problems, gallbladder problems, and obstructive sleep apnea,” said Abigail Aarons, who prepared a report for the Children’s Hospital Association of Texas (CHAT) on Child Obesity in Texas.

Even with healthier food policies implemented at schools, children depend on their parents to eat healthily at home. Pena said that teaching children how to live a healthy lifestyle it is a collective effort. “It’s a divided effort. Public schools, doctors, and parents can be a positive influence on an obese child, however it’s important that we get children to learn what it is to live a healthy lifestyle and create habits that will follow them to adulthood.”