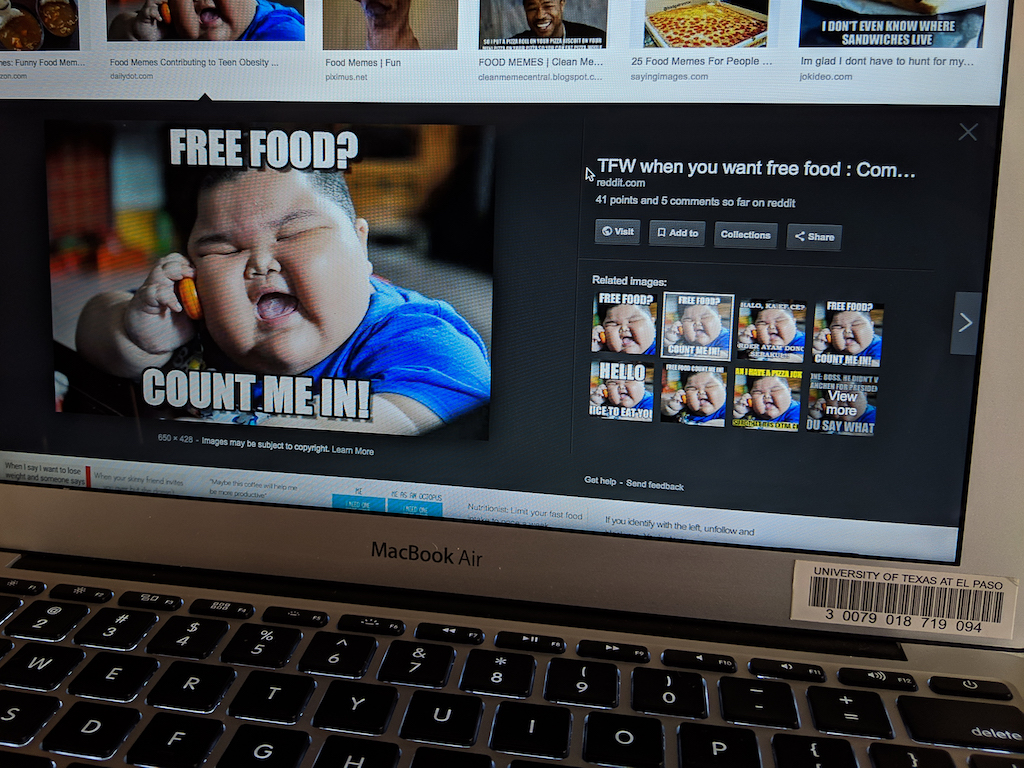 A picture of a meme on the internet that is believed to be a cause into obesity.

At the same time, Hispanic children in Texas have the highest rate of childhood obesity, or 21.9 percent, followed by non-Hispanic blacks with a rate of 19.5 percent and non-Hispanic whites with a childhood obesity rate of 14.7 percent, according to the Texas Medical Association. Obesity among the youth ages 10-17 accumulated a total of 18.5 percent within the state.

Reasons for obesity in teens range from personal behaviors including eating habits and physical activity to genetics, according to the Centers for Disease Control and Prevention.

And researchers are now also studying what role the prevalence of internet memes may be having on the increase in obesity among teenagers.

A new study from Loughborough University in the UK suggests that internet memes may be affecting the lifestyle choices of teenagers that result in obesity.

“A substantial number of individuals on Twitter share health-related internet memes, with both positive and negative messages,” the authors wrote in a letter to a British parliamentary committee.

The researchers referenced a picture of an overweight child captioned “Free food? Count me in!” as an example of memes that promote unhealthy eating habits. They also said memes such as this one have the power to negatively affect a teenager’s self-image and emotional health.

“With the prevalence of social media as a source of health knowledge among young people, and indications that Internet memes may be playing a part in a general apathy towards behaviours that ridicule individuals and groups who display ‘non-normative’, ‘unhealthy’, ‘irresponsible’, ‘at fault’ characteristics. The risks that this poses to future generations and our youth are noteworthy,” the researchers wrote.

Marilyn Rotwein, a nutrition educator and sports dietician at UTEP, does not believe that El Paso’s obesity problem is connected to the prevalence of internet memes.

“I don’t think memes lead to obesity, but (they) sure can be putting negative thoughts into a teenager’s mind,” Rotwein said. “I’m not sure there is a cause effect rise in obesity from these messages, but do believe that poor food choices and eating patterns plus inactivity and genetics plays a more important role.”

Leah Whigham, an executive director for Paso Del Norte and an associate professor at UTEP, see’s obesity among El Pasoans as a lifestyle choice. “It does not get treated as a disease. Instead, people with obesity are often the target of cruel humor,” Whigham said.

Both professionals believe that more information about healthy eating and the importance of physical activity can help arrest the obesity problem.

“I try to help our students at UTEP understand how obesity increases the risk of chronic diseases (diabetes, heart disease, cancer etc). I help them by providing personal confidential nutrition counseling and providing motivational talks throughout our campus,” Rotwein said.

Whigham added: “It is important that we shift our cultural views on obesity. If images in the media and social media, including memes, continue to portray people with obesity negatively, our children will learn the wrong message about their bodies and weight.

“We need to encourage people to think about obesity as it is – a chronic disease that requires a complex approach to manage. We do not distribute memes making fun of people with cancer, heart disease or diabetes yet those are all diseases that can be impacted by diet and exercise. Why should obesity be any different?”