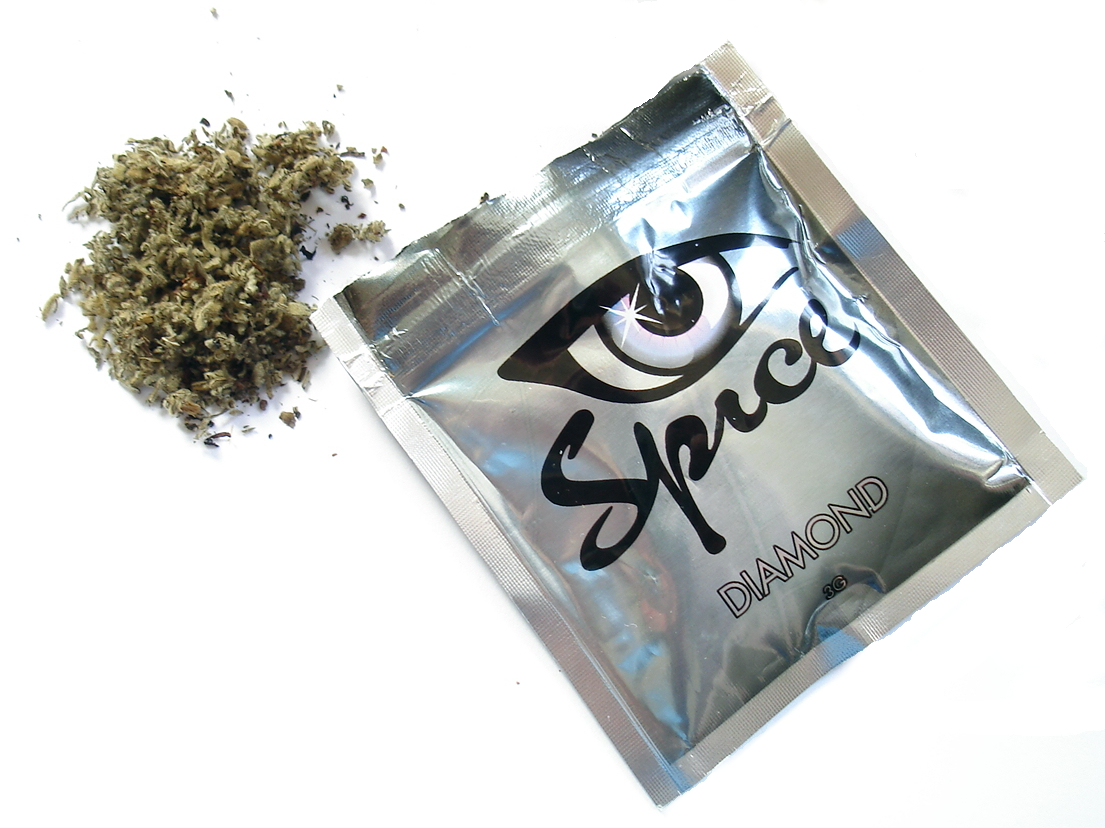 Spice_drug by Schorle is licensed under a Creative Commons Attribution-ShareAlike 3.0 Unported License.
Based on a work at http://en.wikipedia.org/wiki/File:Spice_drug.jpg.

EL PASO — The cheap synthetic alternative to marijuana popularly known as K2 or Spice can be extremely hazardous to your health.

“I thought it was just people exaggerating about the side effects and how strong it was. It was kind of an out-of-body experience. Everything was moving so slow. After about three minutes I started panicking because I could feel my heart beating really fast, and I couldn’t calm myself down,” said Alexandra McGoldrick, the spouse of a member of the military previously stationed at Fort Bliss. “That was the last time I ever touched Spice even when my husband insisted,” she added. Spice_drug by Schorle is licensed under a Creative Commons Attribution-ShareAlike 3.0 Unported License.

Spice is a synthetic cannabis that is considered by some a “safe” alternative to weed, while producing similar experiences to marijuana. When it was still legal, Spice could be purchased at gas stations, head shops, convenience stores, and online which resulted in a major increase in its popularity. The drug was first detected in 2008 in the United States by the Drug Enforcement Administration (DEA), but didn’t gain popularity until late 2010 and early 2011.

The labels on Spice claim that the product contains natural psychoactive material taken from plants and that is why it is referred to as a safe alternative. But experiments show that although Spice does contain material from dried plants, its active ingredients are designer chemicals such as HU-210, which has a similar effect as THC found in marijuana.

According to National Institute on Drug Abuse (NIDA), Spice users have reported that their experiences after consumption consist of elevated moods, relaxation, altered perception and some claim that the symptoms hit harder than marijuana. The most common effects from the drug are anxiety, paranoia, nausea and hallucinations.

DEA experts claim that Spice is 200 times more potent than marijuana to the brain and organs, which can threaten mental health. Because so little is known about Spice and the manufacturers are always changing the chemicals they use to make it’s not known what long-term affects the drug can have on the body. Poison Control Center statistics show that 2,906 calls were made involving Spice in 2010, and twice that number, 6,959, in 2011. The majority of those calls were reported as stroke or seizure activity because of the massive increase in heart rate caused by Spice.

A 22-year-old Army Sergeant stationed at Fort Bliss and former user of Spice said in the past he would buy Spice from a convenience store in El Paso.

“My friend knew a guy that worked at that store, and before they raided the store for Spice he stole a lot of the product and started selling it from his car so that is where we got it from after shops started getting raided,” said former Sergeant Caleb Hunter.

The synthetic marijuana could be purchased for a mere $10 at any of the locations where it was once sold, according to Hunter. The easy availability and low price contributed to the drug’s popularity among teenagers. According to the National Institute on Drug Abuse, 11.4 percent of high school seniors used Spice in 2011 making it the second most common drug used by high school students behind marijuana.

Another reason for its popularity is that Spice is not detected in standard drug tests and users often believe that it is safe or natural because of the failure to trigger a positive response in a urine drug test.

“All the people in the military that I know, including my husband, would smoke Spice to avoid coming up positive in the drug test,” McGoldrick said. “They would say it was the closest thing to weed they could smoke without getting in trouble with the military.”

As a result, in February 2011, Secretary of the Army John McHugh issued a memorandum adopting an Army-wide policy prohibiting the use of Spice or any drug mimicking marijuana for military personnel.

The order banning Spice use among the military was followed by a nationwide sweep for Spice by the DEA on March 1, 2011. Legal penalties for possessing the drug include jail time and a $4,000 fine.

But Chris Rojas, a sales clerk from Bo-De-Gas Graff/Headshop, said that, “there are loopholes to selling Spice. Shops will claim that it is herbal incense or plant food that is not for human consumption but we all know that it is Spice.”

Following the DEA sweep for Spice, the United States Government implemented the Federal Analog Act, which basically bans drugs with chemistry and effects similar to illegal drugs but only if intended for human consumption. According to Rojas, the reason Spice has a label with printed letters saying “not for human consumption” is to avoid the U.S. Food and Drug Administration (FDA) getting involved.

According to the DEA, there have been no reported deaths from overdose. In an interview with an El Paso drug counselor, who does not want to be identified, the woman said: “This drug is no joke. It cannot be taken lightly. We know very little to nothing about the drug chemically because the chemists are constantly mixing who knows what in the drug. Just because you can get your hands on it as easy as marijuana does not mean it is marijuana. One patient I treated (in El Paso) is now suffering from heart problems due to Spice.”

Experts from the Centers for Disease Control and Prevention say Spice can be addictive if used frequently just like most other drugs, and it is possible to increase tolerance for it. “I guess because my husband smoked it for so long he became addicted to it, McGoldrick said. “I think he thought he knew how to control it, but that one time I was there with (my husband and his friend) they both had harsh side effects where they couldn’t even walk straight.”

McGoldrick said during one episode her husband’s heart was beating so fast he panicked and began saying he was going to die. “He was having an anxiety attack and wanted to call the ambulance. He would even have hallucinations sometimes saying he was seeing things and would talk to himself or the hallucinations. I don’t think it is a safe drug. Especially since I have seen firsthand what it can do to you,” said McGoldrick who used Spice once with her husband.

The Department of Justice in December 2011 issued a nationwide sweep of synthetic drugs off the market making them illegal to possess, sell, or consume. According to the Food and Drug Administration and Safety Innovation Act, the only problem is that the manufacturers of Spice are substituting different chemicals in their mixtures to evade the DEA restrictions altogether.

I I am a Multimedia Journalism major, and will be graduating Fall 2013. I wrote for the Prospector for a year covering all sports. My aspiration is to become a sports reporter for a professional team in America.

28 thoughts on “Spice – The cheap cannabis imitator has dangerous effects”